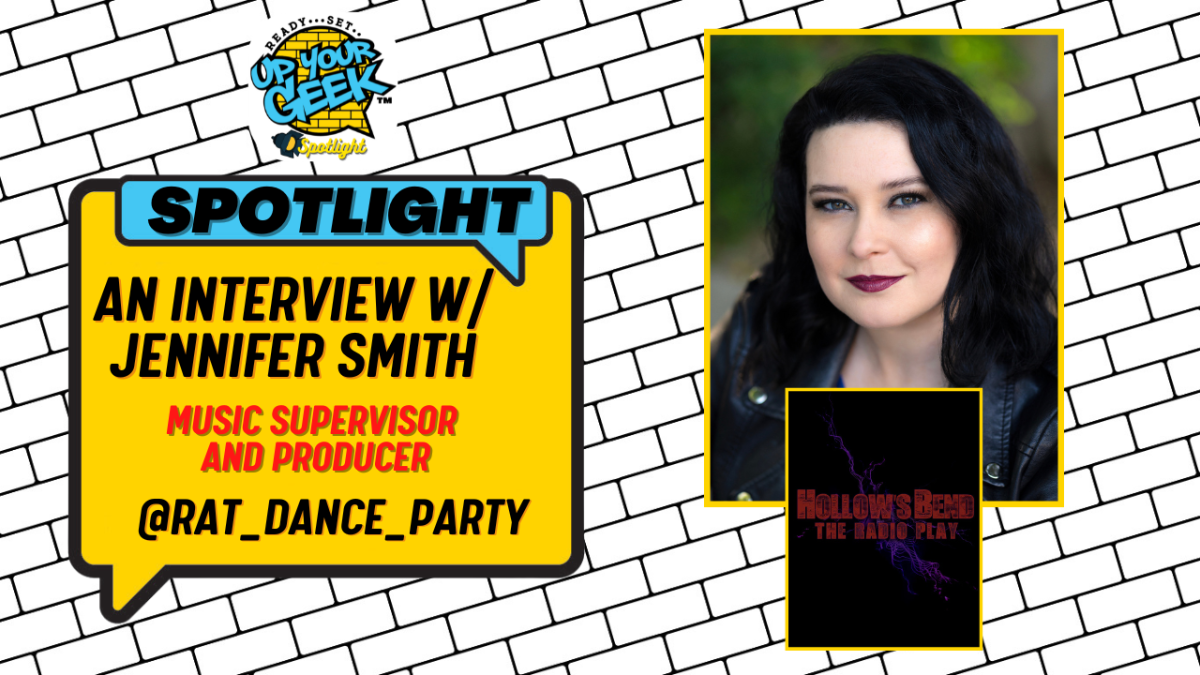 Up Your Geek puts a Spotlight on Jennifer Smith, music supervisor and producer on the upcoming genre-fueled radio play, “Hollow’s Bend.” Music supervision for Hollow’s Bend was handled by Smith’s company Rat Dance Party. Smith talks with Up Your Geek’s Lou Lamar Booker about her experience working on the Hollow’s Bend and how she was drawn to the project which reminded her of a modernized version of young adult television shows she grew up watching in the late 90’s and early 2000’s. “I am thrilled to bring this new approach of audio storytelling to life and to uplift this incredible team as well as create a modern sonic 80’s world filled with the supernatural,” Smith said in a statement.

During the interview, Smith discussed how Hollow’s Bend comes at a time where the need for this type of programing is long overdue. Especially in the audio space. Smith detailed the importance of music and sound in not only the production of an audio play like ‘Bend,’ but in visual media as well.

Hollow’s Bend Radio Play was set to be released on all audio platforms in mid-July, leading up to a special presentation at the San Diego Comic Con 2022, however, the release was pushed to the fall. “We would be releasing in September, in the fall. Right around Halloween,” Smith said.

Smith is an acclaimed music supervisor who has worked on Paramount’s ‘Why Women Kill,’ Netflix’s ‘Deadly Illusions,’ and Paramount/MTV’s Behind the Music. She has worked in the film, television, and media industry for over a decade.

“Hollow’s Bend” stars James Marsters (Buffy The Vampire Slayer), George Sear, (Love, Victor), Paul Johannsson (One Tree Hill) and Jan Luis Castellanos (13 Reasons Why). The play is written by Rachel Quinn and Abigail Reed, who also serve as producers along with Jennifer Smith. Anna Van Valin holds the director’ seat. The production is said to be a fun and innovative take on the radio play format, filled with teenage hijinks, paranormal takeovers and a plan to stop a powerful spirit from wreaking havoc on a small town.

“Hollow’s Bend follows a trapped spirit named Andres as he discovers a loophole that allows spirits to possess the teenagers of the town. He accidentally possesses the new girl, Gemma, while she and her friends (Luke, Dels, Angelica, and Damon) are playing with a Ouija board. Before he can stop it, a malevolent spirit named Ramsey takes control of Dels in order to put a stop to the corrupt higher ups in the town, who are mining the spirits’ life source: a powerful mineral called amyrium. Torn between his wish to be free and his urge to protect the residents of Hollow’s Bend, Andres must do his best to help the teenagers stop Ramsey from freeing her followers and wreaking havoc on the town.”

Hollow’s Bend Radio Play will be released on all audio platforms fall 2022. Listen to trailer below:

Get more details on Hollow’s Bend at moonwakepictures.com and follow Jennifer Smith on her official Instagram @rat_dance_party

Check out the full interview with Jennifer Smith below: