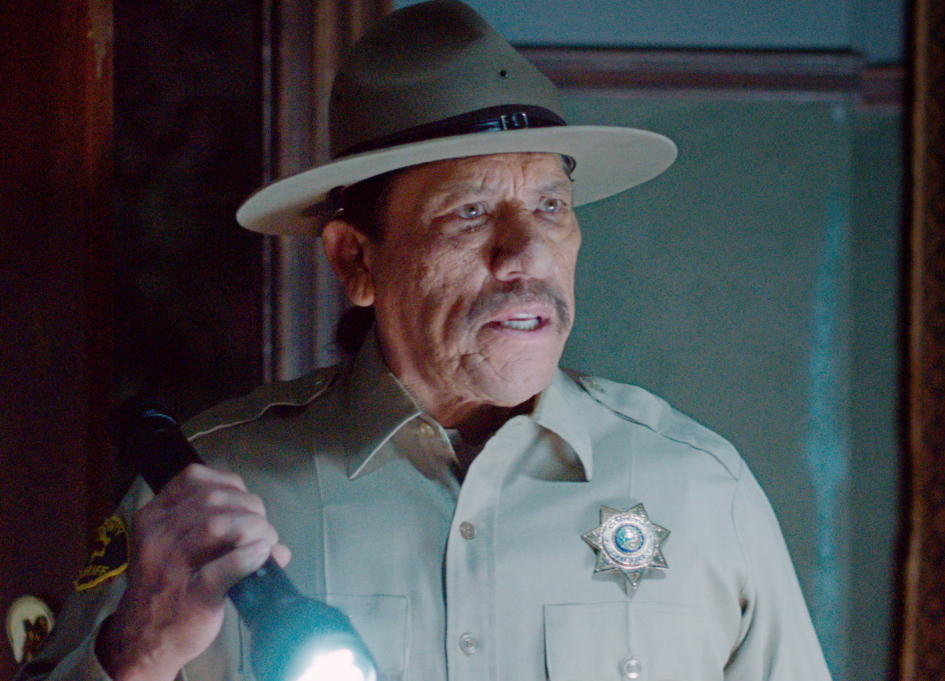 What started as a very cliché, run-of-the-mill slasher, would rapidly become one of the more fun and entertaining low-budget horror rides of the year. Luis Iga Garza’s Murder In The Woods plays as one of the more enjoyable horror films of 2020 with an emphasis on characterization and witty dialogue.

Murder In The Woods opens with a man, desperately grasping for life while bleeding out, is chased down by a vehicle. A flashback showing a young boy peer down on the man is followed by the opening titles. We are then introduced to our group of friends heading out to cabin outside of the greater Los Angeles area to celebrate the birthday. Along the way the group avoids a supposedly dead possum on a main road, causing them to oversteer and collide with the boulders dividing the road.

After setting back on their way and coming across Danny Trejo’s Sheriff Lorenzo, who gives off quite a chilling vibe for the short duration of his introduction, the group make it to the cabin and the typical hijinks of drugs, alcohol, and young adult sex. While the scenes of the group partying are tame by comparison to many others in the genre, it does allow for the cast to strut their skills. One of the scenes follows Jordan Diambrini’s Gabe and Chelsea Rendon’s Chelsea as they begin to get hot and heavy, and hilariously Gabe confuses Celeste’s dead hand with his girlfriend’s. This moment caused me to pause as I was surprised with how hilarious and yet creepily the scene was executed.

There were two other moments in the film that got a good shiver in which you can barely see the murderer in the background. The reveal that Nana was in collaboration with Jesse to enact revenge on Jeanette Somano’s Fernanda and her father, who had subsequently caused the fallout between Jesse’s parents through an affair, was quite interesting, but unfortunately made me question Jesse and Nana’s interactions at the beginning of the film. The beginning showed Nana express her concerns for Jesse leaving, however they were the only two conversing at certain moments and it made the reveal feel less authentic and little more forced. Fortunately the use tight angles and sharp lighting add to the tension and panic the characters portray. The final moments, which see Jesse and Nana strapping Fernanda to a table, are utilized quite well and the tension that is built in the scene is edited almost perfectly without being overbearing or cutting short.

Each death in the film is even given a creative twist and allow for a few highlights in the film; Celeste’s stabbing in the eye, Gabe getting crushed by his own vehicle, Chelsea’s decaptation, and Jesse’s shooting, with Jule’s death from bong stabbing ultimately taking the highlight of the film.

Curiously the final shot of the film features a gunshot that occurs off-camera. As it is clearly an audio addition added in post-production I felt it kind of took away from the ending moments of the movie. While the end had wrapped rather quickly and abruptly, the story was still over and concluded, so the inclusion of this one last gunshot takes away from any closure presented.

Murder In The Woods is a fun, solid passion project featuring a cast that clearly enjoyed the work they were given. While it does hold onto the charms of many low-budget slasher flicks (occasional bad line delivery, chopped editing, and exaggerated gore, etc,.) Murder In The Woods seperates itself from the competition with witty dialogue, fun cast, twisted narrative, and above all else, Danny Trejo.

Murder In The Woods is currently available on major VOD platforms.