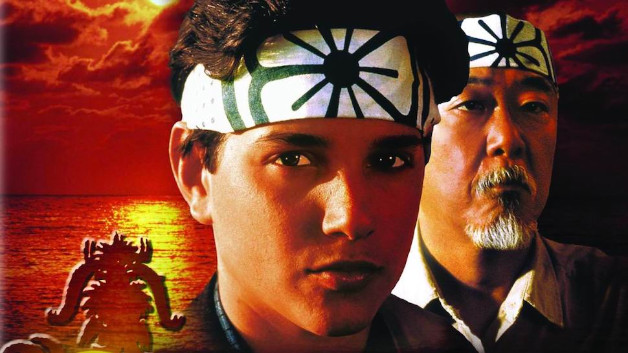 Nostalgia has been a go to for recent entertainment with revivals of classic video games, movies, and television shows. Sometimes these can be successful returns, while sometimes they can be major disasters. One of this year’s biggest surprises has come in the form of a show that premiered on YouTube Red. Red is a platform that has yet to blow up in its original programming, but their latest series Cobra Kai has quickly seemed to blow up and for good reason. Cobra Kai is the sequel series to the 1984 cult classic 80s film, The Karate Kid and like many of the nostalgia filled revivals it has spurred new interest in the original. While Cobra Kai brings back the characters for a continuing narrative it is a perfect time to take a look back at the film that started it all. It’s a film that inspired many people and has been referenced and parodied over and over again. There is a great reason as to why this is, but to understand this it’s good to see what the original is really about and whether or not it still stands up today as a solid piece of entertainment. Here’s my review of The Karate Kid.

The film is set in Los Angeles as Daniel Larusso moves into a new apartment after leaving New Jersey. He’s not happy with this massive change in location and he certainly isn’t happy to have left his friends, but soon he begins to socialize and fall in love with Ali. Her ex-boyfriend Johnny is a part of a Karate Dojo known as Cobra Kai where Johnny and his friends use their skills to beat up Daniel. He’s bullied and cornered, but the apartment complex’s maintenance manager, Miyagi intervenes and rescues Daniel. Not long after Miyagi agrees to train Daniel in Karate in preparation for a big tournament. That’s where the plot really moves forward and the question is whether or not Daniel will be able to learn from Miyagi and what he finds along the way is more important that any fight could give him.

The plot itself is probably the weakest aspect of the film. While it serves the characters well it does come off as very typical romantic sports type film. This simplistic plot however doesn’t detract from it’s strongest element which is the film’s characters. They for the most part are very interesting and well rounded. While Ali plays into the female side character cliche she still has moments that shine and the film’s focus on Daniel and Miyagi’s relationship is the best part. It’s where the film truly shines. There is a lot of emotional moments that land well. Especially when it comes to learning more about Miyagi and how much respect the two of them have for each other. It’s a film that lays its groundwork on its characters and it shows.

It’s impossible to talk about what makes the film work without mentioning the talent behind it. The film was directed by John G. Avildsen and based on a script by Robert Mark Kirkman. Avildsen is best known for his extensive work on the Rocky films including directing the first film. His knowledge of characters intertwined into a storyline that involves a competition is represented well in this film and he’s able to get a lot out of the young and extremely talented cast. Kirkman’s writing while typical in structure is not typical in characters. They are unique individuals from different backgrounds and the dialogue highlights this without offense. These characters are given the room they need to grow and this comes from a great creative team.

The aspect that is the strongest in this film is the performances from the extremely talented cast. Ralph Macchio portrays the Jersey kid out of his element extremely well while bringing a unique charm to the part. He’s extremely likable and his journey of overcoming his own issues is present in his performance. Pat Morita portrays Mr. Miyagi and he does the part justice in playing the wise sensei who has more depth than what appears at first. He’s great in the role, but even better when paired with Macchio. Their on screen chemistry of teacher and student make the film a joy to watch. Not only is it a loving relationship, but there are layers and it’s easy to see why the film has been able to remain a cultural icon for so long thanks to these talented actors.

I recently had the pleasure of seeing the film through Hulu and I don’t know how the Blu-Ray holds up or how much it improves, but seeing the film in high definition was a joy because it showed the competency of the direction as well as the competency of the cinematography. There are a lot of extremely well executed shots including the infamous scene of Miyagi balancing on the beach in the sunset. Visually the film pops in many places and the composition of sequences is definitely a highlight in the film. This extends to the fight choreography as well. Since this is a film all about Karate the fight sequences show the prowess of the characters while making them cinematically engaging. These elements culminate into a visually pleasing film that still looks good to this day despite how long it has been since it hit theaters.

In addition to a great visual storytelling the sound design in the movie is excellent with great dialogue delivered by the cast as well as the foley doing a great job at making every action feel like it has weight to it. The other aspect in sound is the Music which was composed by Bill Conti. Conti is best known for lending his musical talents to the Rocky franchise and his ability to make music that fits the context of the film well is still present here. While his music is good and fits the film well, the most memorable parts of the music comes in the licensed music they incorporate. These choices work well in the film, but also amp up the more cliche moments of the movie. It definitely roots itself in the 80s, which isn’t a bad thing but it does date the film in some ways. The music and all of the technical aspects lends itself to making this film pleasing on the eyes and the ears.

The Karate Kid is considered a 1980s classic for a reason. It has strong technical aspects as well as engaging characters with strong performances to back up those characters. I can certainly see as to why this film has stayed relevant and iconic in all the aspects of what make a film work. While the plot is very basic and cliche it does not hinder the enjoyment found in this classic film. I highly recommend checking this film out if you have yet to see it before. It’s definitely a highly enjoyable and memorable experience.