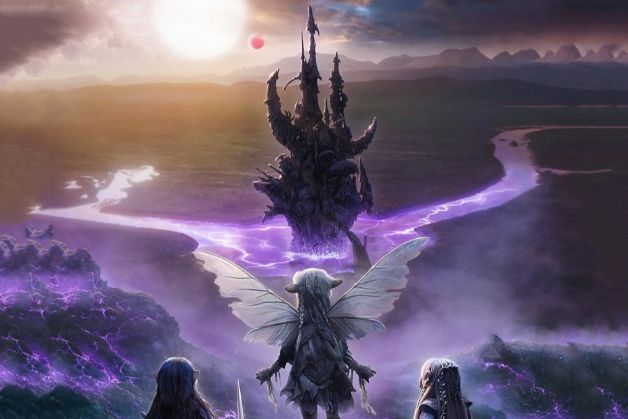 There has been a shift in bold approaches when it comes to the art of film. Television has become the proving ground where new and unique concepts can be given the freedom to explore and play at larger budgets than before. The artistry and craft behind television especially in the age of streaming has never been higher, which is the reason why The Dark Crystal: Age of Resistance exists. The 1982 Jim Henson puppet film, The Dark Crystal was a failure, but over the years it has gained a large cult following for its artistry and it’s unique way of bringing audiences into a fantasy world. This cult status grew more and more after Jim Henon’s passing with more people praising it for the amount of work that went into making that fantasy world come to life. There had been talks about a sequel because of the cult status, but that fell through when Netflix stepped in and gave this franchise a chance telling the Henson company they have full reign to produce 10 hour long puppet driven episodes. It’s bold to attempt a high fantasy puppet series in 2019. No one else is attempting it and no one else can be nearly as successful. With season 1 having been released the question is whether or not its bold attempt paid off.  Here is our Spoiler-Free Review of The Dark Crystal: Age of Resistance.

Set in the fantastical world of Thra, the Gelfling believe to live in peace with the rulers, the powerful Skeksis. These Skeksis have been living for thousands of years at this point and are aging. They have been desperately using the power of the Dark Crystal to keep themselves young. The Crystal happens to be the guiding element that ties all of Thra together. With their abuse of the crystal they are seeing diminishing returns with its rejuvenating properties. At this point their desperate attempt to stay youthful becomes fruitful when they discover they can use the power of the Crystal to drain the life essence from the Gelfling. With this discovery the Gelfling must band together and resist against the tyranny and potential genocide from the Skeksis. These events set off the Age of Resistance and work as a prequel to the original 1982 film.

The show’s plot is one of the strongest elements. With clever writing, dialogue and world building this feels like a fully thought out and brought to life Fantasy Universe in the same vein as Game of Thrones. The World is filled with multiple societies and characters that all aide to telling a layered story that set the stage for the inevitable outcome of the original film. The characters are also just as layered as the world with them having their own narrative arcs that pay off throughout the course of the season. Even the dialogue, which can be dense with lore, is clear and isn’t awkward of incomprehensible. The show nailed every aspect of the writing and I found myself engaged throughout the course of this season. The story gives enough of a balanced experience in which there is enough action, horror, comedy, heart, and suspense that makes this season such a tremendous narrative ride that leaves things open enough for the second season.

With any television series there are usually a multitude of directors and writers that work on individual episodes with a shared creative vision as opposed to fim where it is generally the vision of  one or two people. Each of the series’ directors I felt did a phenomenal job at bringing life to every scene which meant working with the puppeteers to give the puppets a life-like performances. They also orchestrated shots in coordination with the cinematographer to create beautiful looking moments. The hundreds of talented people that came together to bring this to life deserve so much credit. Their ability at knowing how to work with CGI and puppetry hand in hand is phenomenal. There was a lot of passionate people who came together for this project. This also includes the voice cast that brought these characters to life in a stunning way.

The cast in this series is broad filled with both American and British talent. They were brought in specifically for certain roles and each member of this star-studded cast deliver an excellent performance for the character they portray. Some of this cast includes the likes of Taron Egerton, Natalie Dormer, Awkafina,  and Lena Headey. The stand out actor that really caught my attention was that of Mark Hamill as the sinister, yet intelligent Scientist Skeksi. He is great at portraying villains and this was no exception giving life to the character. In addition to him I found that Simon Pegg’s portrayal as the Chamberlain Skeksi was unrecognizable. In the original film the Chamberlain is the most memorable Skeksi because of his voice, his whimper, and how manipulative he is. Pegg’s performance brings that out of him in a way that not only achieves what the original actor did, but also improves upon it. While I mention these two specifically the talent of all these stars really elevates the series, but also brings the right amount of weight so that the story beats hit well and can even move you.

The show like the original film is a technical marvel. Every shot of this series was meticulously crafted and orchestrated to bring life to puppets. The art of puppetry is an extremely difficult art form to master and the Henson company has more than succeeded in their endeavor. Meticulously crafting all of the practical effects and brilliantly using CGI to enhance scenes has made this one of the most ambitious and well-crafted puppet productions to have ever hit the screen. When making the original film they had limited technical resources in terms of computers and in terms of editing, but in a modern sense there is a lot of resources to fall back on to not only enhance the world, but make it look better than it ever has. The technical aspects are probably the strongest component of this series and it left me thoroughly impressed every moment.

The score for this show is just as pleasant giving weight to this fantastical world and feeling epic when it needs to be. The music in combination with the sound design also gives weight to these puppets so that they sound and feel like living beings in this world. This is so crucial to feeding into the believability that the series is trying to bring to it all. The sound design is just another aspect that makes this series something truly special.

The series has easily took what the first film set up and ran with it improving this narrative at every possible turn. This world given a series length was allowed to tell a much richer story and it was incredibly impressive that they were able to keep the same care to puppetry as the original film did. That is such a unique trait. There isn’t anything like this currently in theaters or on television and that alone is worthy of praise. The best thing about the show regardless of how technically impressive it was, is that it was able to tell a story. A story where you weren’t always thinking about the puppets. It told a story with characters that you could easily fall in love with and I’m hoping to see more of that in a season two because it deserves to continue on. If you have yet to see this series I highly recommend it. Especially to those that love the original film and have been waiting to see a return to the World of Thra. It’s easily one of the best shows of 2019 so far.