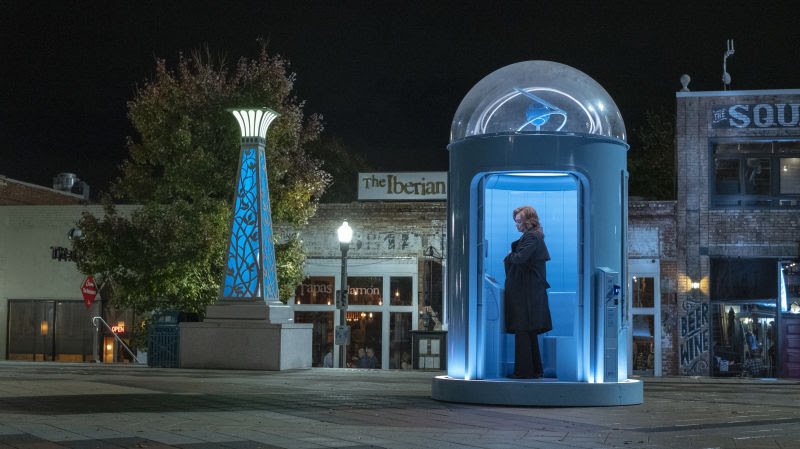 After two episodes packed with tension and insane shit, episode 3 is slower and focuses more on returning character from the comics, Laurie Blake AKA Silk Spectre II. It’s here we see how 30 years have changed Laurie into the colder, wiser ex-mask turned FBI agent.

Laurie obviously seems to be depressed or suffering from sort of issue as she seems not only distant but just a bit more uneasy with the new masked cops in Tulsa. We see her in a supposed Dr Manhattan phone booth that allows you to leave messages for him on Mars. She leaves one, containing some jokes about the Crimebusters and their acts of being heroes. It’s sort of reminiscent of her father Eddie Blake, The Comedian. Seems that Laurie has finally taken up something from her father apart from her last name. We also see Laurie stage a bank robbery in order to lure an illegal Vigilante out in the open and that she’s part of an Anti-Vigilante Task Force.

Laurie is then sent to Tulsa to deal with the case of Judd’s homicide and she’s chosen because of her past as Silk Spectre can give her insight into the Masked war that’s brewing. The episode is so much slower and drawn out the the previous two, as we’re seeing an old character return into a story where she’s just playing her role.

Laurie doesn’t seem happy to be handling a case in a town where Masks are legal, despite it being illegal everywhere else in the country. A talk with Senator Joe Keene Jr, son of Senator Joe Keene Sr (the man who pushed forward the bill to ban masks back in ’77) shows that other cities are now considering adopting his law to allow Police to wear masks and protect their identities.

At the funeral of Chief Judd, an attempted terror attack by Seventh Kalvary is easily brought down by Laurie as she shoots him in the end, which actually makes the bomb go off as the bomber had the bomb tied to his heartbeat. Afterwards we see Laurie and Angela speak and that the two may end up being allies, despite Laurie’s attempt to scare Angela into answering her. They seem to be alike in some ways, which will probably help later on as they continue their own investigations.

Adrian looks upon his works. (Credit to: HBO)

Most of the episode focuses on Laurie but we do get out next splice at Ozymandias’ story, which reveals that he’s actually been held captive at his manor and not simply hiding. Upon running a test involving a suit of armor and one of his clones, Ozy requires an animal pelt to handle the experiment as his subject died in it. Upon killing a buffalo, Ozy is given a warning shot by a masked man on a horse. Revealing to the audience that this is part of an arrangement between he and the masked man, Ozy is determined to confront him and dons his old Ozymandias outfit and goes out to speak to the masked man about the terms of his captivity. Whether or not we see some combat between the two masked men will surely be revealed soon enough.

Overall, the episodes is really Laurie’s episode and it’s interesting to see her headspace after all this time. We’ve seen from Peteypedia that Nite Owl was arrested in 1995 for continuing his vigilante career and that he took a prison sentence who Laurie chose to work with the FBI’s Task Force. Also worth mentioning Devo’s “Space Junk” play as Laurie pulls out a….quite massive Dr Manhattan dildo/vibrator. Killed by Space Junk indeed, or it could be a sly joke at the car that seemingly dropped from Space by Manhattan himself.

Slower, more in-depth look into Laurie’s mind and life after Watchmen. Interesting to note that Laurie is mixing a bit of Rorshach and Comedian in her jokes to Dr Manhattan, seems to be she’s letting those she thought were the worst human beings are influencing her words.

Opinion: Things I Absolutely Want To See in A Zack Snyder Justice League Sequel & Everything I Don’t