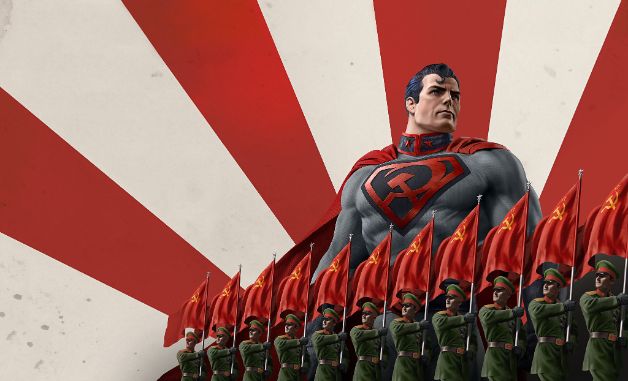 DC’s Animated projects are always fascinating in what they choose to adapt and produce every year. Even if the project may not be as successful it still makes for interesting movies that try to do new things within the space of animated superhero stories. It has been also known that they have played safe in the past making most of their films center around Batman whether it be in original stories or in adaptations of famous stories from the comics. I was waiting for quite some time until they finally went to adapting a Superman story that was not traditional. Superman: Red Son is one of my all time favorite elseworld stories. It’s a fascinating look at ideals and the choices we make to keep those ideals and how those ideals can make us blind. I had a feeling that this story could make a great and interesting animated film and I was very excited to finally see how this adaptation would work out in the end. I was highly anticipating this project and recently got the opportunity to go to the Los Angeles Premiere of the film and thankfully I was not disappointed in how it turned out.

Superman: Red Son follows Superman, but a different one from whom we know. One where instead of landing in Smallville he ended up landing in Soviet Russia and growing up into the communist ideals. He has become a symbol for the working class people of his nation, but after discovering that things aren’t so cut and dry with how things are operated he takes matters into his own hands. The American, Lex Luthor now married to Lois Lane begins working to stop the threat of the Soviet Superman and creates technology that aids him in his progress of extreme American power. The nations and these larger than life personalities clash in addition to the appearance of Batman, Wonder Woman, and the Green Lanterns being presented in a different manner than how one might be used to them. Superman must search within himself to determine his best way to continue his positive ideals without losing who he is to ego.

The film is an adaptation of the Graphic Novel of the same name, but it does things differently. The story, the events, and the structure play into how close it is in its narrative, but it isn’t afraid to present things in a different order or slightly alter how events happen including some of the dialogue. I love the way in which the original story does it and some of these changes don’t quite hold up to how well thought out the original was. The film opts for adapting the story in general as opposed to staying word for word the same. In some ways this works and in other ways it doesn’t quite measure up. This is the difficult thing when adapting another piece of media from a different medium and while it doesn’t hold up completely it still does a great job at getting the same basic points across and delivering an interesting and thrilling narrative in its own right, while still keeping those morally grey moments at the center of this story.

What makes any film great is the care and work that is put into it from the Talent behind said production. This film has talented individuals working on it including director Sam Liu. Liu has worked on several of these animated films over the last couple of years and has helped to adapt comic stories into the animated movie universe as well as help to create original stories. His direction is present in this film, which is always good for any filmmaker to have a distinct feel to their work. In addition to his ability to tell these stories he is able to work with the animation teams to deliver something that looks new and interesting for each film. That is an excellent accomplishment, but some of the best moments of his talent is his abilities working with the cast and getting the best out of all of them.

The voice cast is made up of some extremely talented actors. Some of which have been involved with DC productions including Roger Craig Smith, Jason Isaacs, Phil Lamar, and Vanessa Marshall. There is a reason these actors keep coming back and it’s because of how great they are in their respective roles. These actors are proficient in voice performance and it’s obvious that they are some of the best actors in the field currently breathing life into superhero properties. In addition to them we have Diedrich Bader as Lex Luthor and Amy Acker as Lois Lane Luthor, who give their characters a depth that hasn’t been done in other DC animated films. The title character, Superman voiced by Isaacs is phenomenally deep in characterization and performance with delivering a Russian accent that doesn’t feel as exaggerated as it easily could have been. Each performer contributed something new and engaging to their characters, which made this film much better because of it. Their talent is extremely palpable and often are the reason why each scene works.

With any animated film the most complicated and important element to make said film work is the animation. These films often have much lower budgets than animation films meant to be released in theaters on a wide scale, but that doesn’t mean that there isn’t care put into every frame of this film. The animators are excellent at finding dynamic angles and using foreshadowing to tell elements of the story. One moment I was impressed with was a sequence where we see a young version of this Universe’s Batman and there are bats behind him signifying who he is to become. The animation and the designs are spectacular. It does a decent enough job at capturing many of the iconic imagery from the original Graphic Novel and it makes it look uniquely beautiful  in this version of that same story. The Soviet Superman outfit has always been one I have liked and this film does that uniform justice. It keeps the iconic imagery of his stature, while also signifying how different a world this is set in. DC’s animation always attempts to do new things within the scope of their production. I feel like they succeed way more often than they don’t and that is certainly saying something.

The sound design and musical score also elevate this project to new levels. The film beautifully knows when to utilize the score and when to use silence. Silence in a sequence can often be used to create space and create a sense of unease if the scene calls for such. The sound design is also good bringing weight to every action scene and every instance of movement. The sound design, music,  and visuals really work together to create something special.

Superman: Red Son is an adaptation of a morally fascinating version of the characters we know and love. As a fan of the original comic I don’t think the film quite reaches the greatness of the original story, but it does enough good in its own right to separate itself and work on its own. The film is a great and streamlined way of experiencing this narrative and it is absolutely worth checking out if you like DC animated films or want to experience the classic comic in a new medium.