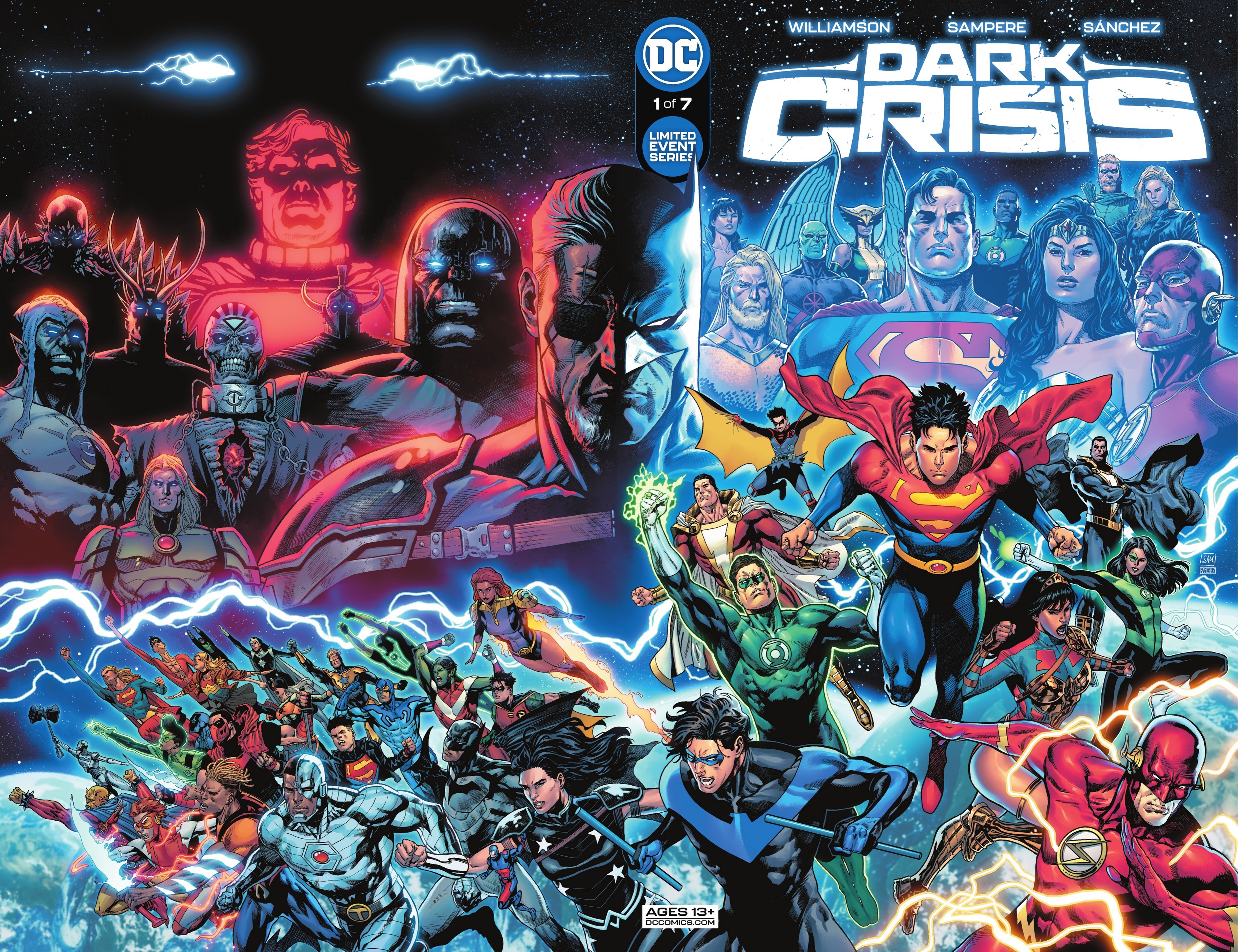 These last few years have been an insane cosmic journey for DC superheroes. From the first Crisis to Death Metal, all the way up to Infinite Frontier and Justice League Incarnate—it’s all been building up to this. Even further back, if you count Multiversity. Writer Joshua Williamson and artists Daniel Sampere have crafted a mega-event that promises to be a love letter to DC and also deliver on the decades worth of stories as they all culminate epically.

DC has revealed that the big event of 2022 is going to be “Dark Crisis,” seven-issue miniseries that will tie up every story thread set up since Infinite Frontier #0. The miniseries promises to be a love letter to DC while also delivering colossal action sequences with the legacy of DC at the forefront. For some fans, crisis events can be overwhelming, as they involve decades of history and lore that can be intimidating to those who aren’t as thoroughly versed in DC as others.

What I will do is provide the titles of books and events that all have connections to Dark Crisis and how they contribute to the overall mythos. There will be some mild spoilers below, so if you haven’t read these, I highly advise you do.

First, we have the event that started it all, the first significant Crisis. Before, there had only been more minor crises between a couple of Earths, but this made the name Crisis a household term in DC. With the massive Multiverse in danger, numerous superheroes fought to save their universes as the Anti-Monitor sought to destroy all universes and replace them with his singular Anti-Matter universe. It was a monumental book at the time and a milestone for the comics industry. Marv Wolfman and George Perez crafted a story that forever changed comics and continues to influence so much today.

Alan Moore and Stan Woch were already crafting a fantastic saga in Swamp Thing book. However, in the midst of that, they created something that would have massive ramifications for the entire DC Multiverse for decades to come. The concept of the Great Darkness stretches back to the beginning of everything. When the Creator created light and birthed the multiverse, the infinite darkness retreated into the new creation and remained slumbering for billions of years. All it wants is for everything to go back to before Creation, where everything was nothing—when there was only Darkness.

Often the most forgotten or overlooked event due to fans not entirely liking the outcome. Coming a few years after COIE, Zero Hour was meant to fix continuity issues that had come up since then. Ironic since COIE was supposed to streamline the DCU—but there’s a pattern forming, so keep this in mind. Involving all of the DCU at the time, they come to face Extant (a villain from the future who used to be called Monarch) along with Hal Jordan who had become Parallax. Together, the villains were determined to change the world and the universe in their image, with Parallax being the ultimate threat to everything.

By the time Infinite Crisis came out, the DCU was becoming a dark place. Heroes were committing acts that were deemed unheroic, villains were committing huge atrocities and forming together in different teams like The Secret Society. The Trinity (Superman, Batman, Wonder Woman) was also beginning to fall apart—with mistrust growing as the three couldn’t reconcile what was becoming of the world. All of that culminated in the event that would set it straight, Infinite Crisis was the result of many titles setting up the stakes.

With this event, fans were treated to the beginnings of the Multiverse returning after almost 20 years of the DCU existing as a singular universe. Old favorites that were thought to be long gone, like the Superman of Earth-1, were brought back to establish a stark difference between the darker, more modern heroes to the classic golden age heroics of that generation of heroes. A pivotal event in DC history, Infinite Crisis remains a must-read for fans who want to witness a point in DC where fans were being asked to question whether or not their heroes should change for the worse or adapt to the times and remain the heroes they can strive to be.

When Final Crisis was released, fans were witnessing a truly unique event in the fact that it was going for something different. On previous occasions, the Multiverse united to stop a common threat. This time? The threat was already there and was already too late to stop. Darkseid being the ultimate villain makes the Crisis feel darker and more serious as he’s finally achieving his lifelong goals. And given the style of Morrison’s writing and themes, the event came out as very hard to read for more casual fans and required a lot of knowledge within the DCU to grasp fully.

But as much as it may be convoluted and how much the tie-ins mattered for the overall event, Final Crisis has been hailed as an achievement in DC Crisis events. It is set in stone as an excellent comic written by an even more amazing person.

This masterpiece of metacommentary and multiversal insanity by Grant Morrison truly is a story that DC fans MUST read. If not for the relevance of going into Dark Crisis, but also to witness just how Grant Morrison can be Grant Morrison. Multiversity is a set of interconnected one-shots that individually tell stories from different earths in the multiverse while having story threads weave in and out to form a complete story.

Here we see the creation of The Gentry, a being that represents the right hand of the Great Darkness, a being that has a sole mission: universally destruction one universe at a time. By the end, The Gentry has set up shop on Earth-7 and uses it as its base of operation, awaiting the word to attack the other universes. It’s here that Joshua Williamson picks up the main story thread in his Infinite Frontier story.

The final series that we feel is important enough to read before Dark Crisis is the sequel to Dark Nights Metal, Death Metal. Take the event of the original Metal and turn that dial to 11 cause this event delivers on some high-octane action known to be provided by the team of Scott Snyder and Greg Capullo. With Earth-0 in danger due to being morphed into the Metalverse by the Batman Who Laughs, the heroes are faced with one of their most significant challenges.

From Death Metal, we get our first Anti-Crisis, intending to loosen up the knots in DCU lore and allow a more open style of Continuity where everything matters. And this event spins out the Infinite Frontier era.

With this final item(s) on the list, I put them together since they’re essentially two acts of the same event. Here we can take a step away from Earth-0 and venture into the Multiverse where Darkseid, formed to his fullest power since Pre-Crisis, is leading the charge in an attempt to control the newly forming Omniverse.

With these two acts, fans will be caught up on the most recent story threads to weave in and out of the fabric of DC canon. Here, the Great Darkness finally makes a move to destroy all of Creation so it can return to infinite darkness, never to be bothered by any form of Light.

And with that, the last thing would be to read Justice League #75 and jump right into Dark Crisis! Hopefully, this helps any fan get what they need to fully understand the scope of what’s to come, an event that’s been in the making for decades. Stay tuned for further updates on Dark Crisis and its impact on the DCU moving forward!