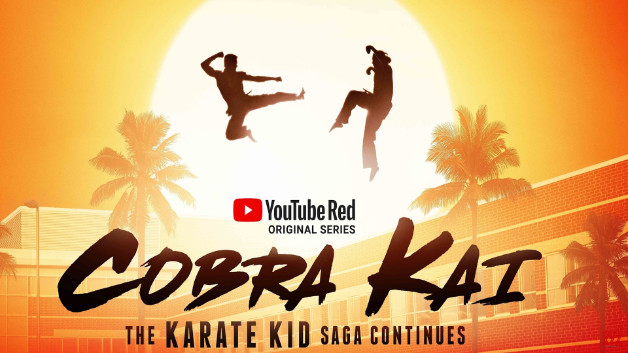 YouTube Red is a fairly new platform when it comes to the subscription based streaming services. While YouTube proper has been around for 13 years, their Red program is only a few years old at this point and in terms of original series they have yet to find Gold with their formula. While a lot of already established YouTube stars were given series it hasn’t provided an interesting and popular original scripted series until now. Earlier this Month I took a look back and reviewed the 1984 Cult Classic film, The Karate Kid. The film is a fun movie that focuses on an underdog story of Daniel LaRusso learning Karate from his sensei, Mr. Miyagi to take on the evil bullies of Cobra Kai. It’s a really fun, but simple film that I never expected would get a sequel series. Following up the classic film is an extremely difficult task when it comes to not becoming a self parodying cash grab. In a surprise turn, Cobra Kai not only continues the narrative of the film, but builds upon and even improves upon it making it one of the best shows of the year so far and the best thing that YouTube Red has released up to this point. It deserves an analysis so here is my spoiler-free review of the first season of Cobra Kai.

It’s 2018 and it’s been over 30 years since Johnny Lawrence lost to Daniel LaRusso at the Under-18 All-Valley Karate Tournament. He’s currently living a rundown apartment hopping between odd jobs while constantly drinking. His life is in shambles and still drives his car from the original film. He’s stuck living in the past. Daniel has gone on to have a successful life and family while owning a successful brand of Luxury auto dealerships. While in a state of depression, Johnny ends up saving a kid from a group of bullies, which leads him down the path to bringing back Cobra Kai. Cobra Kai is the Dojo that he has an extremely complicated relationship with. Daniel learns of Cobra Kai’s return and doesn’t want a return of the bullies that tormented him to begin tormenting again. This sends the series on a path of a back and forth rivalry between Daniel and Johnny that has been brewing for so many years.

The story itself is what makes this series work so well. While it could have been easy to try to recapture the story from the first film it would have felt lazy. This story was made with love and reverence to the original film, while giving these characters much more depth. Johnny Lawrence is no longer a one dimensional bully, but a well rounded anti-hero character. He still has all of his negative traits, but the goodness in him often shines through hammering on the point that the worst parts of him were in part due to his Sensei’s teaching. Daniel is more complicated too. He still retains what made him a good person, but his aggression is still there. It’s a series about a group of people. None of these people are evil. They just have different perspectives. This balanced approach to the storytelling makes it not only a great continuation, but it improves upon the series. It balances the nostalgic tone and moments with modern sensibilities and storytelling making it a joy to watch.

While this show isn’t a production based around the original talent involved, Jon Hurwitz and Hayden Schlossberg take on the mantle as the creative leads on this series. These two are mostly known for not only working on the recent film, American Reunion, but also as the writer/directors of the Harold and Kumar films. Their comedic talents are known and proven, but this show’s tone has elements of comedy backed up by moments of genuine emotion. Their direction not only keeps the show together tonally, but also narratively. It’s funny when it needs to be and emotional when it has to be. It’s a difficult balance, but this series handles it with ease.

One of the series’ strongest elements is the ensemble cast. Ralph Macchio and William Zabka step back into their characters’ roles with ease. The benefit of this series is being able to see Johnny in a much elevated and rounded role, so Zabka gets a lot of material to work with. While some lines come off not so perfectly he still gets time to portray and create an interesting and likable anti-hero character. His on screen interactions with Macchio also work extremely well. It’s also great seeing Macchio returning to the role of Daniel. His performance evokes who Daniel used to be, but also how much he has grown and changed. These two are great in every scene they are in, but the rest of the cast also do an excellent job. It’s filled with many teenage actors who portray their characters well and give off a more modern reflection to that of the original cast members. All around the acting is very strong in this series. While som performances are certainly better than others it all comes together to effectively tell the story extremely well.

The show isn’t the best looking show I’ve seen. It definitely has the feel of a lower budget television production, but it utilizes its budget and locations well to tell the story that it has to. The cinematography is quite good and effective, but it doesn’t break any ground. The visuals also do a great job when it comes to reenacting  or making callbacks to that of the original film. It even blends the old footage used with the new footage well. One of the best aspects of the technical side is that of the costume and set design. All of the props including the clothing was painstakingly made to be as close to the original film as possible. It certainly adds a layer of legitimacy to it. The sets they have also look great and are used to their fullest without feeling cheap or cutting corners. There is a lot of love poured into every frame of the show even if the budget may not reach that of what a film could do. In addition to these elements there are many fight scenes that highlight the choreography. These fights look great and are so well executed that they do a great job reminding you that Karate is the center instrument of the storytelling.

The music and sound design also work. The music often relies on music to evoke feelings of the past. I find it extremely interesting that whenever Johnny is listening to music it’s a 1980s rock song. It not only gives off a sense of nostalgia, but it’s used to show how Johnny is stuck trying to recapture his glory days. The music and sound go together to create and environment that not only works for the scenes, but allow for deeper meaning that reflects the characters motivations. It’s extremely well thought out.

Cobra Kai Season One brings out all of the best elements laid down in The Karate Kid and takes it’s time to improve upon it. It’s one of those rare sequel stories that find ways to surpass the original and become something great in its own right. It’s no surprise why this show has quickly gained a large following and will be getting a second season. It absolutely deserves to continue especially with how surprisingly great it ended up being. I can not wait to see where the story goes from here and if you have yet to see this series I highly recommend that you binge it.