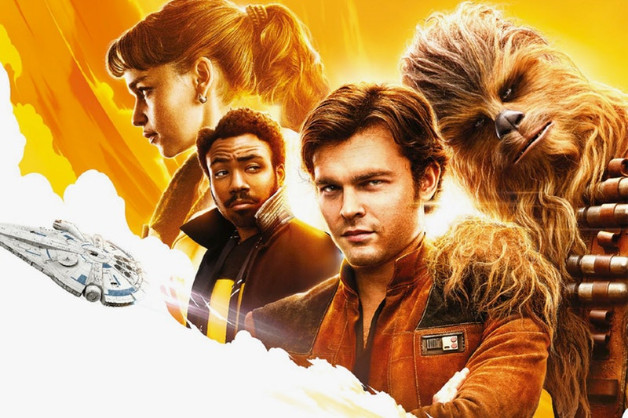 Ever since Walt Disney took on the rights for the Star Wars franchise they have been using every opportunity to keep making new films and keep it in the public consciousness with new movies every year. The main entries in the series have continued stories of  the characters we know and love, but their first Spin-Off film Rogue One took a different turn and focused on the events that led to the Rebels getting the death star plans. In a turn similar to that, Disney has decided to release Solo: A Star Wars Story continuing their new concept of spin-off films. This film follows young Han Solo and because of this fans have been sort of hesitant about this film. Disney is making a gamble with how they have been structuring these films. So far it has paid off for them and in Solo’s case they created a unique entry in the franchise that is definitely worth taking a look at. Here’s my Spoiler-Free review of Solo: A Star Wars Story.

There is a lot of ground to cover with Solo in terms of plot and there isn’t a lot of it I can give without spoiling. The film’s plot centers around the adventures of young Han Solo (Alden Ehrenreich)  struggling to survive with his girlfriend Qi’ra (Emilia Clarke) coming from the planet of Corellia where children are forced into a life of crime. Eventually he escapes but winds up losing her in the process. He ends up joining the Empire where he runs into Tobias (Woody Harrelson) which leads him to meeting Chewbacca and eventually running into the infamous smuggler, Lando Calrissian (Donald Glover) on his journey of pulling off a heist so that he can buy his way to freedom. The film connects the dots leading up to the events of the Original Trilogy.

The film’s plot is layered with betrayal, love, action, and humor which in a lot of ways works really well. The humor lands and many of the action set pieces work, but the film has a lot of uneven pacing. It definitely is a slow first act showing Han dealing with life in Corellia and dealing with the Empire as well. We get a sense of the characters early on, but it doesn’t have the magic that some of the other Star Wars films have in terms of pacing. That being said the pacing does pick up later in the film and there are moments where we run into certain characters and moments that give us the Han that we know and those things land well. Most of the characters are forgettable, but the important ones that go beyond this film such as Lando and Chewbacca are handled really well. In addition to those characters the droid, L3-37 is a standout Droid who is given some of the best moments of humor in the film. The plot in itself will keep you engaged enough, but it doesn’t really start moving until the second act.

The film is directed by long time Actor/Director, Ron Howard and written by Jonathan and Lawrence Kasdan. Ron Howard is a director with a lot of talent and has made some great films in the past and his direction for the most part here is solid. Especially when it comes to handling the acting and trying to shoot as many scenes as practical as possible without overly relying on CGI. Howard replaced Phil Lord and Chris Miller and in some ways I would have liked to have seen what they did with this film, but Howard does a good enough job to bring the film together.

The other talent that deserves mention here is that of the cast and for the most part do decently in their roles. Alden Ehrenreich’s Han Solo doesn’t evoke an impression of Harrison Ford, but he is likable enough in the role. His best moments are when teamed up alongside Chewbacca. This goes for the rest of the cast who do their jobs well enough to keep you engaged and interested in their characters, but none of them really stand out except for Lando Calrissian played extremely well by Donald Glover. Glover evokes the smooth charmer that Billy Dee Williams was able to capture without it feeling too much like an attempt to imitate him. He plays the character well in all aspects and even adds a tenderness to him. Whenever he is on screen he steals the scene and he is by far one of the best elements of this film.

On the technical side the film does a lot of work in going to varied locations and what make a lot of these locations work is that they feel like real and lived in parts of the infamous Galaxy far far away. They are often done with sets rather than CGI and that bodes in its favor. It also has many puppets that do a great job at making these characters feel like they are actually in the same space as the actors. Overall the CGI as well as the sets all look top notch. There isn’t any moment that stands out as having weaker effects, and It all comes together to make the environments looks quite nice and feel lived in.  They bring the world of a Pre- Rebellion Star Wars to life.

The biggest flaw in terms of technical aspect has to be the lighting and color grading earlier in the film. While many of the locations are meant to be dark and gritty sometimes this comes at the cost of losing what could have been visually interesting. These moments are extremely dark. It’s a bit distracting, but it doesn’t break the film in any way. On the other side the cinematography often does a great job at covering the desolate Worlds they visit. The camera work is interesting and it works well in that regard.

Solo: A Star Wars Story is an entertaining film with a good amount of humor and action, but it’s also a forgettable film in the Franchise. It doesn’t do anything particularly new, but if you want to see the adventures of a young Han Solo it does that well. It embraces that it’s a standalone entry that doesn’t try to be bigger than it is. There is enough fan service that people will enjoy and it’s certainly worth your time alone to see Donald Glover as a young Lando Calrissian.