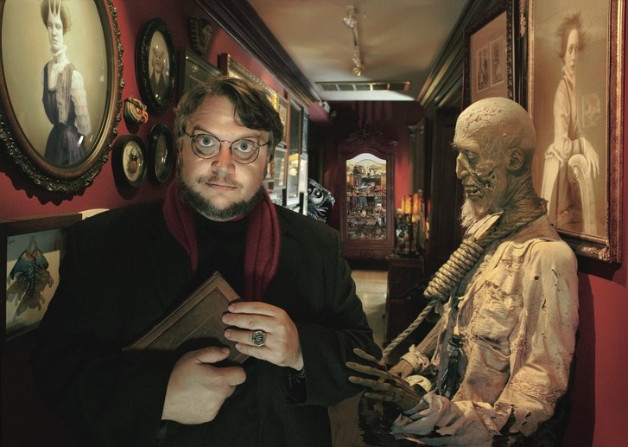 It’s incredibly difficult to explain what makes certain films masterful in only a few words. The craft of filmmaking is the combination of multiple individuals working towards a singular vision usually put forward by the Director. Some films have multiple directors. Some films are carried by the strength of the screenwriter. Some films are the work of a masterful creator putting forward a singular image and everyone following to deliver on that image. Guillermo Del Toro is one of the most unique and brilliant filmmakers of our time. His work while often overlooked is filled with such beautiful originality that they are often worth multiple viewings. He’s made some of my personal favorite films of all time, but one thing that he is best known for and he is best at is making films that fall under the term lovingly referred to as Dark Fairy Tales. The combination of fantasy elements and dark, but heartfelt storytelling devices make his films unlike anything else. Del Toro’s works is something that I’ve admired as a filmmaker for many years and he certainly deserves the recognition to his contribution to cinema. It’s hard to completely understand why his films are essentially fairy tales without giving an in depth look at what makes something a Fairy Tale and also looking at two of his films as the best examples of why they fall under that category. Here’s an in depth look at the brilliance of one of the most interesting filmmakers of our time. There may be some Spoilers in this article.

There’s a certain perception as to what makes something a fairy tale. Fairy Tale in general is a broad term to refer to folklore and stories that fall into the category of fantasy with stories of mythical creatures most commonly including, fairies.  Many people often think of these stories as children’s stories that are lightheaded. The perception is that they are simple tales with simple resolutions. While this can be the case many of the most famous Fairy Tales happen to fall into much more darker and thought provoking territory than initially given credit for. Many classic fairy tales have darker connotations, but it’s not without purpose. They are often fantastical stories with incredible elements, but that is just a facade to what is actually being told. They are morality or life teachings hidden in a much more entertaining and palpable wrapping. The use of creatures is a frame and an incredible frame at that with deeper meanings hidden underneath the surface.The meaning can either be about following a moral rule or it could comment on life itself.

The brilliance of Guillermo Del Toro’s Work is that his stories often take on the role of being a Fairy Tale. He tells fantastical stories that are often made for adults with adult themes, but it’s not without purpose and his best films have something much more important to tell underneath the surface that’s usually hidden behind creatures and fantasy. His admiration of this classic folklore is present in all of his work, but it’s most prominent in his more personal work including The Devil’s Backbone and Cronos. Those were his two first films that came from his own imagination and they scream dark fairy tale mixed in with a touch of horror. They have prominent themes and they are important works in his filmography. These themes have carried on into his other films and as he has gotten better as a filmmaker the fairy tale approach has just gotten more masterful and impressive. The two films that I chose to look at and give an example of this is what I consider to be two of his best films, Pan’s Labyrinth and The Shape of Water. Each of these films have much more to them than just monsters and fantasy.

The Shape of Water

The Shape of Water tells the story of a mute custodian working at a secret government facility. She lives alone, but is neighbors to a man who is very much like a father figure to her. Her position isn’t very glamorous, but she enjoys many of the simple things including movies, but her life is changed when a new entity is brought into this facility. A river monster who was treated as a God is South America. Soon enough they begin to form a bond and she falls in love with him. The film culminates in a fight for love and freedom, while dealing with not only the American Colonel who wants to destroy it, but also the Russians trying to gain intel on him.

The beauty of the film comes through in not only the incredible acting and production design, but in how this film uses fantastical elements to make criticisms and commentary on real world issues. The film falls into the fairy tale moniker because there is much more under the surface. It deals a great amount of care to focus on characters that aren’t typically given credit and are seen as the true underdogs. While the film is set in the 60s it’s themes of equality and the underrepresented communities are universal and still very topical. While the idea of a fish creature being mistreated by an oppressive,white government is extremely telling the film also shows other characters including her friend, Giles who so happens to be gay and he struggles with homophobia. She’s mute and has to deal with how people treat her. There is specifically a heartbreaking scene where she has felt broken because of her disability, but her love the River god has made her feel happy and whole. If you strip away the mythical elements of the film in its core it’s a romantic fairy tale about mistreated people striving for love and acceptance for who they are.

Del Toro’s Masterful direction of this film secured him an Oscar and for a very good reason. It’s a beautiful story of love, but it also is inherently a fairy tale in all manner of definition. This film is certainly worth mentioning here, but his best film by far, Pan’s Labyrinth fits the Fairy Tale genre even better.

Pan’s Labyrinth tells the story of a little girl named Ofelia who is moved into a new home in 1944 just at the tail end of the Spanish Civil War. Her mother is pregnant and now married to Captain Vidal, the commander of the fascist militia that plan to find and kill all of the rebels that are still present in the area. While the story of Vidal searching for the rebels is present it often takes a back seat to young Ofelia being visited by a Faun who tells her that she is a princess and that she must complete a few tasks before the full moon so that she can ascend to join her royal family and leave the world of Mortals behind. The tension escalates and the fantasy increases with monsters both in the mortal world and in the fantasy world that she explores leading to a thrilling and emotional ending.

The film is definitely Del Toro’s most obvious dark Fairy Tale with fantastical creatures and elements permeating into a realistic world. What makes this film work so incredibly well as a fairy tale is that the fantasy elements are representative of the journey that Ofelia is forced to go through. In my interpretation of the film I see the fantasy elements as not real, but it’s her own way of making sense of the senseless violence and scary situation that she finds herself in. The films themes of war and violence is ever present. It’s a commentary on not only war culture, but it’s a criticism of fascism as a whole. It celebrates life and individualism while using the fantasy elements to make that message hit even harder. The film’s production design is phenomenal with some of the best monster effects I’ve seen in film and that only helps to make what it’s putting across work so incredibly well with some really interesting creatures that can be seen as metaphorical as well. It’s meaning of morality against pure evil in all forms is something that hits home hard while enjoying this visual masterpiece.

This film is easily Guillermo Del Toro’s masterpiece. He found an incredible balance of heart and emotions along with the horror and heavy dramatic elements presented. It’s an extremely well thought out and balanced film that proves his mastery of the dark fairy tale genre.

Del Toro’s work is unlike anything else. His films have a unique quality that can only come from a director with a very specific vision and his Dark Fairy Tales are masterfully done with love and attention. His use of horror elements alongside fairy tale imagery set in a realistic backdrop is something that no other filmmaker is doing and it’s why he’s the master of this specific subgenre. I hope to see him continue making interesting and thought provoking dark fairy tales in the future. It’s certainly one of the things that makes him brilliant as an artist.