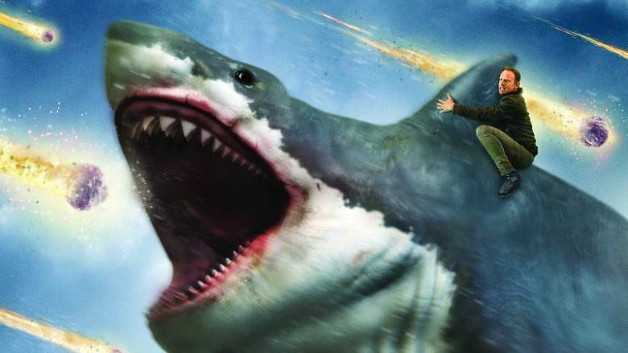 It’s safe to say that what people look for in film is to be entertained. Everyone is looking for a small escape from their lives or to be engaged by a work of art that can make you feel the whole spectrum of emotions in a safe and controlled environment. Film gives viewers the ability to lose themselves in something that has been well tailored to make them feel things. There are so many well regarded films in existence with many films being credited as cultural milestones. While all of these films exist and the potential for the medium is boundless we often have a tendency to also enjoy the lower spectrum of art. It’s impossible to have gone your life without seeing a bad film, but it takes a certain level of bad to make it incredibly enjoyable. They are movies that are so bad that in turn they become great. We enjoy them on their bad dialogue and horrible filmmaking. With the release of The Last Sharknado: It’s About Time it’s a perfect time to analyze why movies such as that are loved. Why they have the ability to in turn entertain audiences. It’s a fascinating question to ponder seeing as I happen to be one of those people and I believe I found out several reasons as to why that is.

Balancing the line between Bad and Good

It’s hard to categorize what makes a movie so bad it’s good. There are lots of reasons why this is the case and it’s a tricky line between being terrible and being bad, but entertaining. It’s important to note that everyone’s definition of bad is different, but for the most part when discussing “so bad they are good” films it usually relates to a film that in all the areas of filmmaking it has failed, but not failed to the point of boredom. It failed to the point of being laughable where  these moments of unintentional hilarity take hold of the scenes because of how ernest the filmmakers are trying to be. Generally these films don’t necessarily wink to the camera and they usually aren’t as self aware. A primary example of said films include the extremely popular 2003 “disasterpiece”, The Room.

This Room showed that a film could work so hard to be serious,but  fall flat on its face and people still love it because of how laughably enjoyable the film is. The Room was made with the purest of intentions. Tommy Wiseau wanted to tell a moving drama centered around events and people that inspired and shaped his life. He worked hard for his vision, but he had no clue how to run a film production. He pushed forward with the money he had and finished the film after pushing his way through multiple film crews and after the actors suffered trying to follow his vision. There was a lot of issues and problems behind the scenes and the film The Disaster Artist perfectly captures the process that went into making this film. What we got from this film is an iconically bad experience with some of the worst moments of dialogue and editing I’ve seen in a film. The plot is often nonsensical with horribly written scenes where most of Tommy’s dialogue is dubbed over because of his thick accent and inability to say his lines clearly. The result of this train wreck of an experience is an incredibly entertaining movie that’s baffling to watch. It hits the mark and essentially is the perfect definition of “so good it’s bad”.

The Room was able to try so hard and also fail just as hard, but manages to maintain an entertainment value while so many bad films are released aren’t nearly as bad, but they aren’t nearly as entertaining. It’s impossible to tell which films will certainly be this way, but the so bad it’s good quality is rare. It has to hit a certain level of camp mixed in with taking itself a little too seriously to make them work. The result is that audiences can’t get enough of them. The Room constantly sells out screenings for this very reason. There are many films like The Room including Ed Wood’s classic, Plan 9 From Outer Space as well as the now infamous, Troll 2. Each of these films follow a similar path as The Room in that they are both just as poorly made, but each do have their own unique ways at being bad. When they are able to find the middle ground and make magic it’s certainly a unique thing that will be remembered for years to come. Sometimes they can live beyond the critically acclaimed films of their time.

There is certainly something to be said about the people who seek out these types of films. There is an appreciation for the art of filmmaking as well as appreciation for the idea of irony. Everyone who enjoys these so bad it’s good movies understands that in all technical aspects they are bad movies. They have no qualms about  why they enjoy them. They love them for their bad qualities and that takes a certain level of self-awareness. There have been studies that have shown that appreciation for films that fall outside the norm including these types of films can be linked to high intelligence. This in part has to do with these types of films not being a part of the mainstream line of filmmaking. They reside just on the outside and they appreciate them for their unique qualities. They also appreciate the quality  in films that is known as “camp”.

Camp films and elements in films refer to the parts that are often entertaining, but bad or weaker elements of said film. The films that are “so bad they are good” are loaded with camp. They run almost entirely off of camp and while camp can be seen as a negative thing there are many films that are well made and critically acclaimed that use camp to it’s advantage. While we all love the Marvel films they often use elements of humor and camp to soften the storytelling and to often make for a much more pleasurable viewing experience. This level of camp definitely keeps films like Plan 9, The Room, and Birdemic popular. They have that quality and that quality isn’t a put on, but a genuine thing that comes about in the nature of the result of the finished product.

There is an ironic appreciation to all of this. Many people including myself love the badness and understand that what we are watching isn’t good at all, but the line is becoming more blurred between genuine appreciation and irony. Many fans of the films know they are bad, but they genuinely adore the film for those qualities. While it may be strange to say, but these films have been extremely successful. They may have failed in some ways, but they have also succeeded in other ways. They are some of the most rewatched and most beloved films of all time by their loyal fans. They hold a weight to them and their audiences and fans genuinely love them for being as weird and as horrible as they are. It’s an incredibly unique thing that only happens every once in a while.

There is certainly a distinct understanding with “Trash Cinema”. People go to these films knowing that they aren’t high art. They are not looking for something that will make them think, but for a communal experience. All of these films are best enjoyed with friends and other fans who understand the ironic, but genuine love of this type of art. It’s certainly something that has  a different feeling than that of mainstream cinema. It’s less about the amazing qualities of art, but the enjoyment between people. It inevitably is a way of socializing. These films have their deserved place in the history of understanding of cinema as an art form. They are perfect examples of something that inevitably succeeds even if the intent of the film is lost. The end result creates something new and changes the perception of it artistically. We love bad movies because we understand and are fully aware of what it is. We appreciate film. So much so that we can sit back and enjoy something that failed with a grin on our face because we see the efforts of the filmmakers. We can see that the film was made by people who loved movies and just wasn’t able to create great art. We appreciate their work and dedication ad we also have fun making fun of it because it is often laughable and because we can share the experience with others. It’s a uniquely beautiful experience unlike anything else.