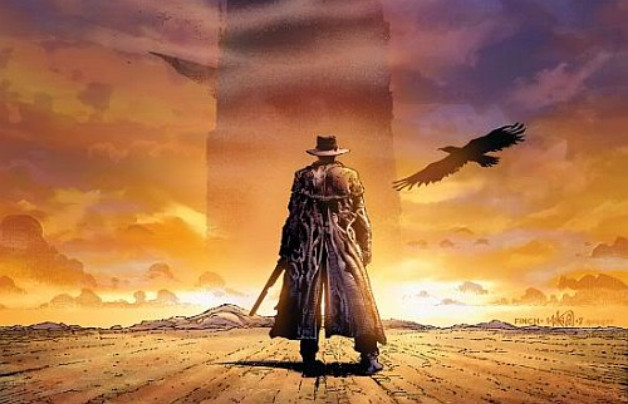 Stephen King is one of the most prolific authors of all time. His imagination is boundless and his work speaks to that with plenty of stories that often fall into the horror genre. He’s known as a Master of horror for his work within the genre creating classic stories including IT, The Shining, and Carrie. He is a constantly working author releasing new novels very often in addition to the film and television series that have adapted his work. Last year one of his biggest and most interesting work was adapted into a feature film. The Dark Tower novel series is a long and complicated dark fantasy series that King had spent years writing. It’s a multilayered story with multiple characters and crossing paths, but the film adaptation was a huge failure turning it into a 90 minute PG-13 action film. It not only was critically panned, but it also was a flop at the box office. It was a total failure. This is extremely unfortunate given the source material is quite a great series of novels worthy of being adapted into another medium. It deserves to be given it’s due justice of an adaptation. While there are still rumblings about an upcoming Series at Amazon nothing is really set in stone and the ball doesn’t seem to be rolling. Since it has been over a year since the film’s release it’s a good time to bring this property back into the light and really discuss why this deserves another adaptation and why television is most likely the best place for said adaptation to be in. While I will not be spoiling major plot points there may be some minor Spoilers regarding characters.

The narrative of the series is somewhat convoluted, but it essentially breaks down to a Gunslinger by the name of Roland is enamored with a quest to make his way to the Dark Tower in the land of Mid-World before the evil and powerful magician, Walter arrives. The Dark Tower itself  is the link between multiple planes of existence and if anything does happen to it then that could mean the end of existence itself. Along the way Roland runs into plenty of fascinating characters that help to push the narrative in many directions introducing new elements and layers to Roland’s journey.

The plot of the series is carefully carved out with an ample amount of thought put into every page in each novel. The structure of a continuing journey could work extremely well in an episodic drama television series with the characters constantly having to move to catch up to evil and deal with it along the way. There is enough material to pull from to do either an adaptation of the story that was established in the novels or do a completely original narrative set in the same Universe. There is an overabundance of plot details that a 90 minute film was certainly unable to capture. To adapt it correctly it needs time to breathe not only for the audiences’ sake of understanding the World, but also in terms of appropriate character growth and development. All of these elements could make for an outstanding fantasy show and given to the right talented filmmakers it could easily be a well regarded series.

One of the core elements to why the series works so well is the incredible characters that King introduces in this world. It’s extremely important especially for a television adaptation to get a sense of who the characters are because they are the center of what would make this whole Universe work.  There’s a multitude of people with interesting goals, motivations, and personalities that really make it all stand out. It is no surprise that the lead character is that of Roland. Roland is a gunslinger and when we initially meet him he is a cold and calculating person with incredible fighting skills. His ability to use his weapons is at an almost superhuman level, but at the beginning not much of his personality really shines through. He keeps almost everyone at a distance, but what makes this character intriguing is that as he runs into other characters and allies you get a chance to see who he really is and he develops tremendously even to the point that a sense of humor shines through. In addition to his progression there is a good portion of time spent as a flashback showing him when he was young and the adventures he had with his first love.  It’s a great development for the protagonist. We also have a great villain in that of Walter who is also commonly referred to as the man in black. He has incredible powers that not only have an impact on what he can do, but he can also impact other people. His powers are near limitless and he’s a fascinating villain whose intentions aren’t quite clear, which adds to the intrigue involved whenever he appears and how he relates to some of the even larger and more threatening villains to show up.

In addition to Roland and Walter there are multiple other characters that have importance in the story and for each other. One of the other major characters is a boy named Jake Chambers, who is present in the film adaptation. He’s the first ally that Roland encounters and he is integral to the plot and the often evolving magical aspects of the series. He is the first character that becomes part of the Ka-Tet, which essentially means a group of people brought together for a singular purpose known as Ka. In essence this means family. The other members of the Ka-Tet include Eddie Dean who was a former drug addict brought over into Mid-World from our world. We also meet Susannah Dean who is a legless woman of color who also has multiple personalities. These 4 individuals become Ka-Tet and essentially they are family. They care for one another and they are the lead focus of the entire series.

This just barely scratches the surface of the very interesting people and plotlines that arise from them. They all play a big part in the story and their stories are worth exploring. It would be quite a great experience to adapt these characters for television so that their stories can be given the appropriate space for growth and development in an episodic and ever-evolving format.

King’s work is legendary, but what is even more interesting is that each one of his stories takes place within the same interconnected Universe. In the novels there are often strong references and callbacks to that of other King characters, locations, and events. This makes his work unique from many other authors and unique for the horror genre.  Recently Hulu used this interconnectivity to its advantage with their hit series, Castle Rock. That series took it’s time to craft an original narrative set within his multiverse. That show was incredibly successful, but what makes The Dark Tower fascinating is that it is essentially the center for every single parallel universe. This Multiverse theory is more than beneficial to that of creating a bond between already established and popular King Works.

The characters of Eddie, Susannah, and Jake all come from different time periods within the Universe that contains all of the his other fictional towns and stories including Salem’s Lot which is made important later in the novels. In a vein similar to that of Castle Rock an adaptation of The Dark Tower could really spend some time diving into this obvious connection and working in characters, themes, and ideas from each story. There is a lot of possibilities for connections, which could be too obvious and distracting for a film adaptation. Using the medium of television allows for these connections to happen naturally rather than it being forced. A multiverse is such a benefit to that of writing a series because they not only have the things present in Mid-World to use, but they can also rely on any of King’s works to make the audience more understanding of the ramifications of the Dark Towers’ significance and how it ties everything together.

The benefits of connections such as this are boundless and an adaptation of this could potentially be as big a hit as Castle Rock has been. A multiverse really does separate this from the typical fantasy drama and it has the potential to explore this as much as possible and for as long as possible with a continuing series.

The novels are layered, dark, and mature. The series is willing to take risks and to have content that is disturbing. It’s violence and adult themes are a large part of it and the film adaptation failed it with turning it into a PG-13 action film. There is a lot of freedom with a television series especially in terms of content that in a lot of ways big budget films don’t have. With this in mind the potential for another chance at an adaptation is so important. There is a lot to work with and if handled in the correct way it could easily be as big a hit as any other show. It’s unfortunate the film turned out the way it did, but this series deserves to live again in a medium that would be beneficial to properly capturing the tone and feeling of the source material. As a fan I’m looking forward to the day that this becomes a reality and I hope that the interest is still there at Amazon.

Super Villain Solo Films: Why They Are A Product Of A Lucrative Trend
WB Home Entertainment spotlights Constantine: City of Demons; Batman: The Animated Series, Reign of Superman & More @NYCC 2018