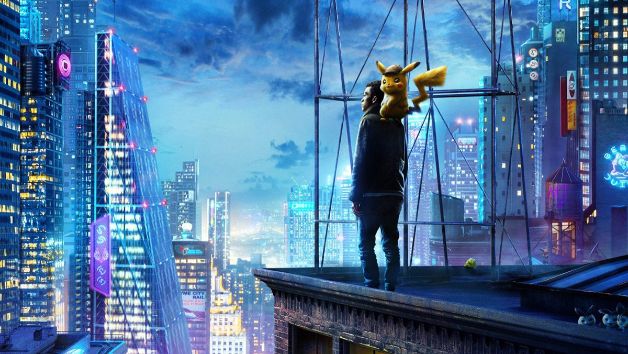 Pokémon is one of the most popular franchises in all of entertainment and it has proven time and time again that it can have long lasting power to grab hold of popular culture. The revival of Pokémon is in part due to the popularity of Pokémon Go, which grabbed hold of the public consciousness in 2016. That popularity kickstarted the beginning of continuing work on developing a live-action adaptation of this extremely popular franchise. It is surprising that it has taken this long for an adaptation to surface, but Warner Brothers has finally released the very first live-action Pokémon film in Pokémon: Detective Pikachu.

This film adapts a Nintendo 3DS side game into a film noir setting while keeping the world intact. As someone who grew up with this franchise I had been waiting quite a long time for this. I honestly never thought it would surface, but it has and my own hype for the film was incredibly high. The biggest question that has been on everyone’s mind is if it would meet expectations. In my perspective it not only met expectations, but reminded me of why I love this franchise. Here is our Non-Spoiler Review of Pokémon: Detective Pikachu.

The film’s plot is one of familiarity to those who have loved the film noir genre. It’s story begins with Tim who has an aversion to having a Pokémon companion. He is called back to Rhyme City after the death of his father, Harry in what is initially believed to be an accident. Harry was a decorated detective and it isn’t long before Tim goes back to his father’s apartment to deal with his affairs that he runs into Harry’s Pokémon Partner, Pikachu. What is unusual is that Tim can understand everything that Pikachu is saying and this opens the door for a mystery surrounding the death of Harry and the looming threat of an evil entity. It’s up to Tim and Pikachu to solve the mystery surrounding Harry and bring peace to Rhyme City.

Detective Pikachu’s narrative is a great vehicle for the world building. What I mean specifically by this is that the story and the structure has some weak spots, but it is elevated in that the World building is really well thought out and is dedicated to keeping true to the spirit of the Pokémon franchise. The narrative had some hiccups including some obvious twists and spots where the film’s logic doesn’t quite hold up, but the Universe it built was all breathtaking as a fan of the series. My love of the franchise was ignited in seeing the Pokémon I care about brought to the big screen in live-action without feeling cheap. My love of film noir was also satisfied in a mystery that while having some holes ended up delivering. The film does is certainly not the strongest in terms of narrative structure, but it makes up for it in execution and a deep and present care for the franchise.

One of the most important things behind any project is the talent behind it and this film did have some strong individuals that successfully brought the World of Pokémon to life. Director, Rob Letterman’s previous work included the 2015 reboot of Goosebumps in addition to his work in animation.His history of working with a known brand in accordance with the visual style of animation really lent to this film immensely. The script was written by him and a team of writers which can explain some of the minor issues I had with the predictability. Regardless of the issues Letterman brought a style to this movie and knew how to elevate the script in its execution in accordance with all of the people involved in making this production a reality. This included the talent from the cast that were chosen.

The cast of the film really shine quite a lot in the film. Their performances are all extremely memorable and bring each character to life so that the heart of the film shines through in every scene. Justice Smith stars in his first major lead role. Smith’s previous work on the Netflix series, The Get Down impressed me so it was no surprise that he carried the film with nuance and emotion that served as the grounding element of the story. His performance really nailed the complicated way he felt about his father. In addition to Smith the biggest celebrity in the film is that of Ryan Reynolds lending his talents to the role of Pikachu. His performance is not a light Deadpool as people would expect, but a sweet and caring character in which the humor is felt through his earnest energy. He gives a stellar performance and brings the character to life with charm and heart. This is felt especially in scenes opposite Smith where even though Pikachu is a digital creation you can still feel the actors giving their all and working well off of each other.

Kathryn Newton also takes on the role of Lucy Stevens who is a young reporter who helps in the investigation. Newton’s performance is also stands out alongside Smith and Reynolds The film’s cast includes some veterans including Bill Nighy and Ken Watanabe in respectable roles that give even more legitimacy to this film. The cast give this film life and without them it wouldn’t work nearly as well as it does. They really shine as some of the best parts of this film.

The visual splendor this film has is incredible for anyone that loves and cares for Film Noir or Pokémon. The cinematography was handled by John Mathieson who is known for working on Logan and Gladiator. His gorgeous shots highlight the beautiful recreation of a world where Pokémon exist. Rhyme City in particular is gorgeous to look at whether it be during the day where Pokemon are seen everywhere or at night where the neon signs give the film its Noir tone.

The visuals of its world are continually heightened with the inclusion of the gorgeous CGI that brilliantly brings the Pokémon into a 3D space while keeping their original designs for the most part intact. I was impressed with how their insistence on staying true to the source material while changing minor things paid off. It makes the whole film a visual treat that elevates the quality of this production tenfold.

The music of a film is as important as the visuals and this film doesn’t fail in that department. The score was composed by Henry Jackman whose career covers composing scores for both video games and films, which made him a perfect match for this film in particular. The score really brings up the tension when needed, but also adds character to the world presented before us. There are moments in the score that feel like they could have easily been lifted from the video games the series is based on. This adds an incredible layer of detail to making it feel like it is part of the same Universe as those games were. His score is an audible high point to this film and just adds to the countless other examples of how greatly they succeeded at at recreating the World of Pokémon.

The film isn’t perfect, but it never set out to be. It’s a film that genuinely cares about the world and Universe they adapted. There is more than enough visual references and direct connections to both the anime and the games that it works on multiple levels without feeling tacked on. It’s a film that was specifically made to appeal to both young and older fans of the series and if you are a fan of Pokémon you are at least guaranteed to enjoy it. I walked away from this film falling back in love with Pokémon and it gave me a similar feeling of joy I got 20 years ago when I got to see Pokémon: The First Movie in theaters. If you are a fan of the franchise in any context I highly suggest you take the time to see this in theaters if possible.