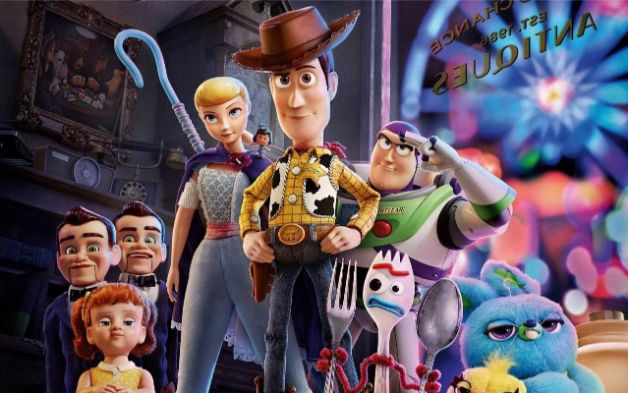 The Toy Story franchise is one of the most popular and profitable animated franchises of all time. Its influence changed the way that film is made and ushered in the use of computer animation.  The original film was a big gamble. Betting all of your success on a new technology was risky, but what we got was an incredibly layered and well made animated film that effortlessly combined humor with heart. The original film went on to form the success of the rest of the series and with 2010’s Toy Story 3 many people assumed that would be the end of this incredibly well made series, but they obviously were very wrong. Toy Story has returned for a 4th installment. I grew up with the series and it holds a special place for me, but I was concerned with having a fourth entry due to the third film having a beautiful ending that wrapped up quite a lot. My expectations for this film weren’t on the level it was for the other films, but what I got from it more than satiated my worries on this project. Here is our spoiler-free review of Toy Story 4.

The story picks up not long after the events of Toy Story 3 with the toys living with their new child, Bonnie. On the first day of school for young Bonnie she creates a new Toy, a spork named Forky. Forky is loved by Bonnie and Woody takes it upon himself to make sure that Forky remains safe for her. As Bonnie and her family goes on a trip Forky escapes and it is up to Woody to find Forky and make sure he returns safely back to Bonnie, but on their journey Woody runs into Bo Beep who had left before the events of Toy Story 3. Her sudden reappearance makes everything more complicated as Woody must save Forky and examine the meaning of his own life.

The plot in all of the stories are very well done and this one is no exception. There is quite a simplicity when laying out the events, but the execution of said events is what genuinely brilliantly works. There is a lot of depth amongst the characters and while certain characters don’t get as much in terms of development, the ones that do really are examined in ways that bring new insight into this entire series. While this film doesn’t have nearly the emotional finality of the previous film it still is able to tell a worthwhile adventure that explores the emotions and the importance of its main characters. The expanded nature of Bo Peep being a catalyst for Woody’s introspection is an incredibly well handed facet of its narrative that I found myself really enjoying as I watched this great addition to this series.

With a film series as well loved as Toy Story, the talent involved had to be operating on all cylinders and they absolutely were in all aspects. The film was directed by first time Pixar director, Josh Cooley who, with a plethora of other writers, worked hard to make this story to the best of their abilities. His direction showed an understanding of the world and the characters in coordination with his visual style and the way the animators interpreted every moment of the very well crafted script. The talent from him shows how well he can handle a project such as this and it proves that he has enough talent to continue with other feature films. While he may have been new to the world of directing it shows that he has an eye and a talent for doing so. The talent also involved the massive team of animators who made sure every scene was as gorgeous and as expressive as it needed to be with the characters feeling perfectly synched up with the past films in this stellar franchise. Cooley’s direction of this team was phenomenal, but this also extends to another aspect and that is in the acting.

The cast from these films always bring a lot to the table with an understanding and love of these characters. The film features the return of Tom Hanks in the role of Woody who again leads the cast with such passion that it makes so many of the scenes work. Tim Allen also does a great job returning to Buzz, but the standout was certainly the return of Annie Potts in the role of Bo Peep. Here character was given so much more to work with and Annie beautifully filled out the complexity of this character in ways that the other films never showcased. Her talents were on full display and it was great seeing her have so many great elements to play with. In addition to the returning cast we got some new actors with Keanu Reeves playing Duke Caboom, Keegan- Michael Key and Jordan Peele playing Ducky and Bunny, and Christina Hendricks playing Gabby Gabby. These new cast members give this film a unique element that sets it apart and their talent brings so much needed comedic relief as well as emotional points as is needed. Cooley’s direction of this cast was excellent and it was very apparent that everyone involved really did focus on making this the best that it could possibly be with their performances. It is a stand out component of this film.

The film is incredibly  gorgeous to look at. Pixar has been leading the art of computer animation and set the standard so it is no surprise that the animation in this film is incredibly impressive. While each of the films have a great look to it you can tell that constantly improving technology lends itself brilliantly to this style of film. The world these characters inhabit are highly stylized, but there is enough grounded reality that makes every bit of detail placed a spectacle for the eyes. An excellent example of the technology at play happens early on when there is an intense amount of rain present on the screen. The rain and the way it made everything react was incredibly realistic, which makes it apparent how much work was put into every frame of this film. The visuals only added to the already well crafted bones of the narrative, but they were essential in bringing this film to life.

In addition to visuals the music is just as important and the score was produced with original songs by Randy Newman. His return to this series was a much needed nostalgic element that made the film feel like a part of what came before it. His song, “You Got A Friend In Me” is iconic and its presence in the film was much appreciated especially to those that have followed this franchise since the beginning. His music really added a lot to the experience in the audio department. It is only made better with the extremely talented sound design artists who make every scene sound accurate to the visual world they created. The foley bleeds into the sound mixing with ease making everything sound correct. The brilliant people who work on these films really do know how to make every technical aspect serve the bigger picture and bring the film together even if sometimes their work can be lost behind the more popular names.

This film is another excellent entry into the Toy Story series. It does not have the same emotional punch as Toy Story 3, but that film set an incredibly high bar. This film did an excellent job at tying up some loose ends and telling another story that was worthy of being told. If you are a fan of this series I highly recommend that you check it out when you can. It has heart, humor, and reverence for all of the elements that has made the franchise so endearing and memorable. It is absolutely worth your time seeing this as soon as you can. It is a lot of fun and if this is the end of the series it is a fitting way to close out this story.