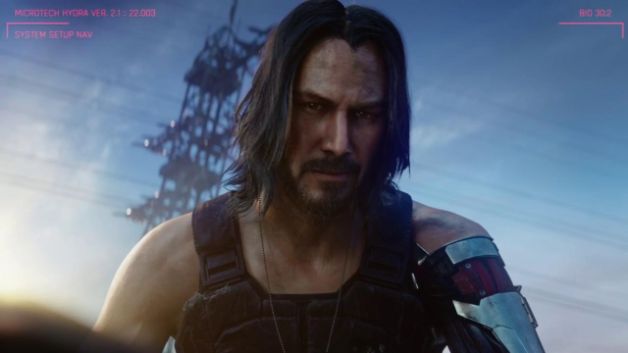 Video Games are as valid an art form as any other form of artistic medium that exists. I’ve covered them quite a few times with my previous articles, but there is an element that seldom gets discussed in relation to gaming. The games themselves are the draw of the attention and often times the creative individuals behind said projects are secondary to that  outside of a few notable examples. This has been common for some time, but there is another aspect to consider when discussing the people behind the scenes. It comes into play when a Game Studio decides to spend the extra money to hire a famous celebrity or well known actor to portray a character or multiple characters in their games with the latest example being the recent announcement of Keanu Reeves appearing in Cyberpunk 2077.

This inclusion of a well known talent can bring a lot of attention to the promotion of said game, but I want to discuss not only why celebrities would agree to be a part of these games, but also why the practice of adding them into the game is something that has been utilized by Game Developers in the first place.

Investment in the Property

The first thing to consider with the inclusion of well known celebrities and actors into gaming can oftentimes come from their connection to said property that is being adapted. Many times when adapting a film into a game they often look towards people who sound similar to the actor in question, but when they include the original cast it can bring a layer of legitimacy to the project and sometimes actors are dedicated enough to the property to give the game adaptation some real legitimacy. A great example has been Bruce Campbell’s dedication to the role of Ash consistently portraying him in multiple mediums including the previous games that were released in the early 2000s all the way up until this past year with Ash being a playable survivor in the hit game, Dead By Daylight. This dedication to the character is more than admirable and it’s the most genuine reason why you’d lend your likeness and voice to a game.

While Bruce Campbell has been an active proponent of the character it’s rare to find actors who are willing to be hands on with a game, but that was the case with 2009’s Ghostbusters video game, which is slated to have a modern remaster this year. That game was successful in not only being a faithful and fun game, but also getting the entire cast to return to do voice work for their respective characters. They even took it a step further and was able to have the game’s story written by Dan Aykroyd and Harold Ramis. This gathering together of the cast made a game worthy of being remembered and for being pointed out as a rare example of well known actors being able to add to the experience of the game because of their loyalty to this franchise.

There are certainly some high quality examples of this happening in gaming, but it’s not the most common of occurrences. While it happens rarely it still does set a precedent that fans expect the quality of talent returning for further game adaptation of popular films. This dedication to said property is great, but there is another more obvious reason why famous individuals are included in games and that is most obviously publicity.

Recognizable talent is a goldmine for Game Developers and more importantly Game Studios. Having that pull to bring in an actor with credibility or popularity does wonder for media coverage for these games. Their faces and voices lend quite a lot of credibility to the projects and that goes a long way when deciding how to appropriately market your game.

This year Keanu Reeves made waves with his appearance in Cyberpunk 2077 at E3 and that quickly took over the attention of not only gaming media, but media in general. That announcement of his presence did wonders for the popularity of this upcoming game. The game will certainly sell more copies with his talents being lent to the game and that is exactly what CD Projekt were going for with it. Reeves is currently a huge actor starring not only in the successful John Wick 3: Parabellum, but also appearing in Toy Story 4 as well as heavily promoting the return to the Bill & Ted series. He’s a well loved actor and that inclusion won over so many people seeing as he is in the minds of everyone currently. It was a genius marketing ploy, but it is hard to tell whether or not this is just a gimmick to grab attention or a genuine choice of talent until the game is released.

There is a sense of cynicism when it comes to choosing a popular actor for a role in a game because in the past it has often been used as a way to sell the project rather than actually bringing anything interesting to the game. When the hit game Destiny was released it initially planned to have Peter Dinklage of Game of Thrones fame to voice a robot character, but his performance was criticized and eventually replaced by video game voice actor veteran, Nolan North. It’s a difficult balance to bring some needed attention to a game, but it could easily fall over and backfire with the talent they bring on board. There has to be a love for the project, but so many Game Publishers are strictly looking to find ways to make sure their investment pays off big for them. This uncaring capitalistic viewpoint unfortunately shapes the way games are made and using a gimmick like hiring a celebrity in another tactic employed for advertising.

The fear of marketing decisions mandating the resulting quality of a game is scary to fans of gaming. We don’t want the games to use tricks over quality because some rich executive wants to line their pockets. While this might be a cynical take on the subject it isn’t far off. While this is important to cover it’s also important to see the times where their talents were put to great use.

The majority of Game acting comes from a small, but hard working group of talented actors that include the likes of Troy Baker and Nolan North. Their voice acting and motion capture skills are incredible and they have so much range that they are used in everything, but the talent of well known actors and actresses are undeniable as well. Their range is often excellent with their charismatic persona that has gotten them to that level of fame or exposure. They have a lot of talent and sometimes their presence in video games can lend quite of a lot to the world they inhabit.

One of the best examples of this happening was in Brutal Legend  with the inclusion of Jack Black getting to portray a roadie who journeys into a magical Heavy Metal inspired land. His likeness was used for the game, but slightly exaggerated.  His presence added so much to the character that he portrayed and his appearance didn’t feel like a giant gimmick to sell the game. His presence was based on his skill set as an actor and a musician and he certainly delivered in the role exponentially.He was hilarious in the game and there was a lot of his talent being funneled in because of his love for the project. His inclusion is certainly one of the best alongside the multitude of other cameos that were present in that underrated gem of a game.

The game Sleeping Dogs also utilized some talent including Emma Stone for a brief sequence in addition to Lucy Liu providing the voice of a major character and their presence was welcome in that their skills and talents were highlighted in propping up the narrative of the game in interesting ways. Their presence like with GTA wasn’t overstated, but it added to the experience. This inclusion of celebrities is based on their ability and how they fit into the game they make an appearance in. That is so important when considering a celeb for a high profile game. Those decisions were smart and can be used as excellent  examples that hopefully Cyberpunk 2077 follows.

The inclusion of a celebrity or well known talent in a game can be something that heightens the experience. Seeing your favorite famous person in a game you like is exciting, but it shouldn’t come at the cost of the experience. This practice is fascinating because as often as it does happen it doesn’t seem like it will take over the gaming industry. The talent involved in video games still feels like it is a majority voice actor and performer. I think that this is actually a good thing seeing as voice actors are just as talented as any celebrity, but don’t get nearly the attention of the big stars. I’m all for Celebs in gaming, but their presence should be meaningful and luckily there have been a lot of great examples of this. Hopefully these examples can be templates for what future Game Developers can follow.