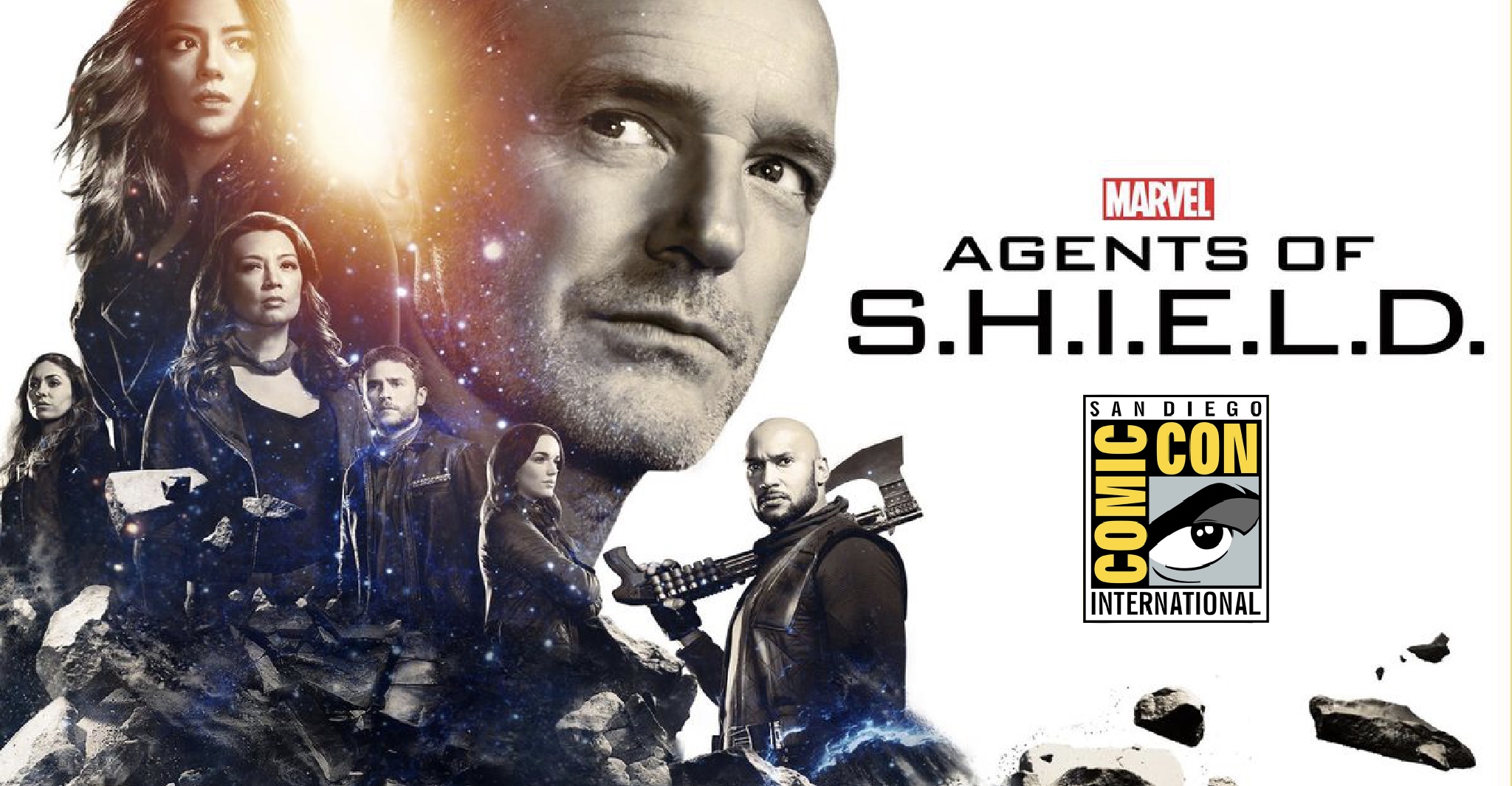 Marvel Entertainment returns to San Diego to join in on the celebration for Comic-Con International’s 50th anniversary, with all-star panels from Marvel Comics, Marvel Television, Marvel Games, Marvel Animation, and Marvel New Media.  This year will also mark a first-ever Hall H presentation for Marvel Television’s flagship series, Marvel’s Agents of S.H.I.E.L.D. that will be guaranteed epic. With exclusive announcements, special video presentations, star-studded signings, and unforgettable fan experiences at the Marvel booth, this Comic-Con is one not-to-be-missed – all starting Wednesday, July 17 through Sunday, July 21.

For breaking news and exclusive livestream coverage from Marvel at San Diego Comic-Con, watch on Marvel.com, YouTube, Twitter and Facebook. Coverage is hosted by Ryan Penagos, Lorraine Cink, Langston Belton, Angélique Roché, Justin Warner, Nore Davis, and Josh Saleh. Tour the convention floor with Marvel, learn about some of your favorite Marvel characters, and don’t miss a beat from the Marvel stage and events within and around SDCC!

Get an inside look at the latest and greatest from Marvel Games! Attendees will see exciting new content from MARVEL ULTIMATE ALLIANCE 3: The Black Order, Marvel’s Iron Man VR, and Marvel’s Avengers, with many unannounced surprises and panel exclusives. Host Greg Miller (loudmouth at KindaFunny.com) will be joined by Bill Rosemann (VP & Creative Director, Marvel Games) and other special guests from titles throughout the Marvel Games family!

The cast and producers of Marvel’s Agents of S.H.I.E.L.D. will return to San Diego Comic-Con in epic fashion as they take over Hall H for the first time ever! Be the first to hear the scoop about the show-stopping conclusion for season six and what awaits in season seven of Marvel’s flagship television show. With your favorite stars in attendance, including Clark Gregg, Ming-Na Wen, Chloe Bennet, Elizabeth Henstridge, Iain De Caestecker, Henry Simmons, Natalia Cordova-Buckley, and Jeff Ward, along with executive producers Maurissa Tancharoen, Jed Whedon, Jeff Bell, and Jeph Loeb, this is a must-see panel to celebrate seven seasons with the world’s greatest fans! This action-packed series from Marvel Television and ABC Studios airs Fridays at 8/7c on ABC.

Marvel Comics #1000 Revealed: A This Week in Marvel Special Event

Marvel’s flagship podcast comes to Comic-Con loaded with secrets, giveaways, reveals, news, guests, and more! And, if you think you’ve got the stuff and want some swag, you can challenge the Marvel crew in a special House of Ideas Throwdown! Join host Ryan Penagos (aka Agent M, VP & Creative Exec, Marvel) along with CB Cebulski (Marvel Comics Editor in Chief) and an array of Marvel creators as they dig into Marvel Comics #1,000, one of the biggest Marvel Comics projects ever assembled, and celebrate Marvel’s 80th Anniversary!

Get caught in Spider-Man’s tangled web along with Executive Editor Nick Lowe, Assistant Editor Kathleen Wisneski, as well as writers Nick Spencer (Amazing Spider-Man),  SeananMcGuire (Ghost-Spider), and Frank Tieri (Absolute Carnage vs. Deadpool, Absolute Carnage: Lethal Protectors) to find out what’s on the horizon for all of your wall-crawling favorites! Spider-Man’s mysterious new foe sets his plan into motion! Ghost-Spider joins the Marvel Universe! And New York experiences Absolute Carnage!  PLUS – Don’t miss an exclusive giveaway variant comic of SPIDER-MAN: CITY AT WAR #5!  The stunning rendering by Skan depicts an homage to the classic AMAZING SPIDER-MAN #3 cover by Steve Ditko!

Join Cort Lane (SVP, Animation and Family Entertainment), Kalia Ramirez (Director, Family Entertainment – Development & Partnerships),  writers Mark Hoffmeier(Spider-Man: The Animated Series) and Marty Isenberg (X-Men: The Animated Series), and fan-favorite voice actors Josh Keaton (Spectacular Spider-Man, Marvel’s Avengers Assemble) and Jennifer Hale (Wolverine & the X-Men, Marvel’s Guardians of the Galaxy) as they take a journey through highlights of over five decades of Marvel cartoons. Including behind-the-scenes dish on the making of classic shows, a run-down of all ten of Spider-Man’s series, and a 10th anniversary retrospective of Marvel’s Animation division, this is a panel you don’t want to miss! Plus a special in-memoriam look at Stan Lee’s greatest animation moments.

Celebrate ten years of Women of Marvel panels and 200 podcast episodes! Join hosts Sana Amanat (VP of Content & Character Development, Marvel) and Judy Stephens (Producer, Marvel) and special guests to talk 80 years of Marvel history, what it’s like working as a woman in comics, and the future of the industry.

Legendary writer Jonathan Hickman is joined by Editor in Chief C.B. Cebulski and other Mighty Marvel Guests to bring you all the latest and greatest news straight from the House of Ideas! Learn what comes next for the X-Men after the senses-shattering revelations of the House of X and Powers of X!! Plus, stick around for a few things we can’t even hint at yet!

This is your chance to meet the head of editorial at Marvel! In an exclusive and intimate panel experience, Editor in Chief C.B. Cebulski, along with superstar talents including Rob Liefeldand Skottie Young, will talk about anything and everything involved with Marvel Comics. What secrets are held in the House of X?  Can Venom prove himself a true hero in Absolute Carnage? When is Dazzler’s next album coming out? What were C.B., Rob and Skottie’s favorite Marvel characters as kids, and how do they feel about those characters now?  Ask these questions and more in the Q&A!  PLUS – Don’t miss an exclusive giveaway variant of SILVER SURFER BLACK #2, Giuseppe Camuncoli’s take on Carnage soaring the spacewayson Silver Surfer’s board!

A slew of Mighty Marvel guests take you behind-the-scenes and show you how a Marvel comic book is made! Learn about every aspect of production including writing, penciling, inking, coloring, editing, and more – with creators on hand to offer personal insights and anecdotes. If you’re interested in the ins-and-outs of the comic book industry, this is the one panel you can’t miss!

Please note this signing is a ticketed event and passes will be available on a first-come, first-served lottery basis beginningwhen the floor opens on Friday, July 19 at the Marvel Booth (#2329).

See you Freaks and Geeks at SDCC!!

Marvel Entertainment, LLC, a wholly-owned subsidiary of The Walt Disney Company, is one of the world’s most prominent character-based entertainment companies, built on a proven library of more than 8,000 characters featured in a variety of media over eighty years. Marvel utilizes its character franchises in entertainment, licensing, publishing, games, and digital media.