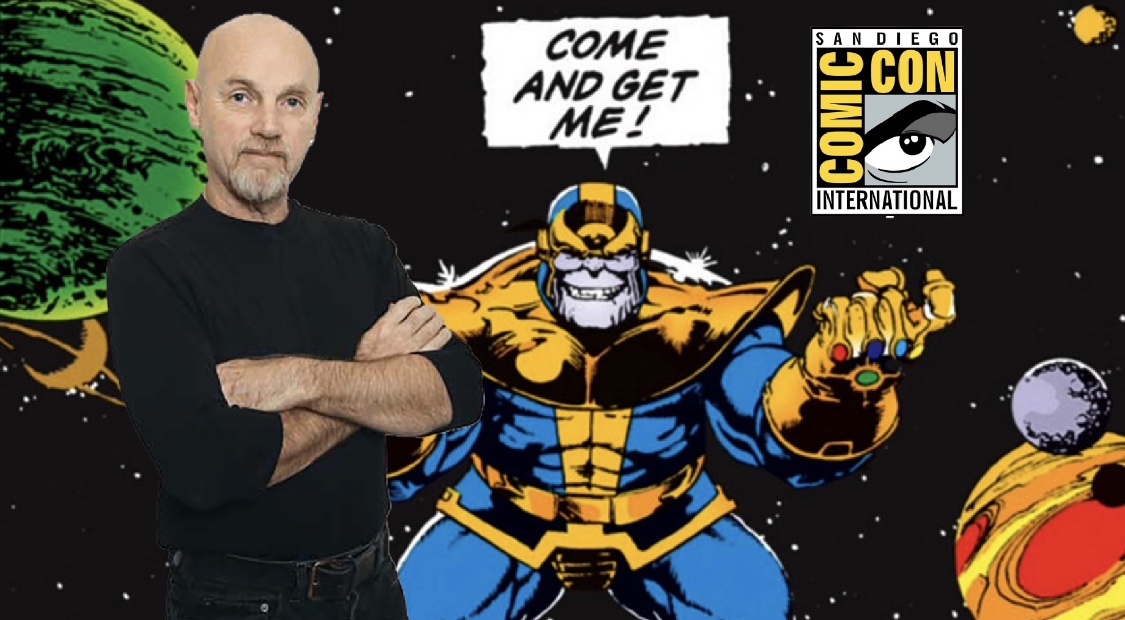 Announced today: Comic Book Legend Jim Starlin, the creator of Marvel’s Thanos, The Infinity Gauntlet Saga, DraxThe Destroyer, Gamora and more, returns to the San Diego Comic Con Spotlight in 2019 with a panel and signings celebrating Thanos’s “Best Years Ever”. The panel titled Jim Starlin and the Infinity Gauntlet Saga will take place on Thursday July 18th 2019 from 10AM to 11AM in Room 7AB.

It will be moderated by Comicbook.com’s Editor, Jim Viscardi, and will showcase the mind of the man who began it all as he discusses how his creations, Thanos and the Infinity GauntletSaga, have become some of the biggest pop culture references of the 21st Century thanks to the 10 year, 22 movie Marvel Cinematic Universe and their conclusion, 2019’s Avengers :Endgame. Attendees can look forward to hearing what’s coming next including a look at the highly anticipated Dreadstar novels and the conclusion to the Thanos Graphic Novels.

“Thanos, Dreadstar and I are so pleased to be returning to the San Diego Comic-Con, the center the comic book universe.” Said Jim Starlin. “We will do our best to behave this trip. We promise there will be absolutely no finger snapping.”

There will also be signing opportunities to be announced in the coming weeks.

Full Panel Details are Below:

Join Legendary Comic Book creator and author Jim Starlin, the mind behind the Infinity Gauntlet Saga and its main protagonist Thanos, as he discusses how his creations have become one of the biggest pop culture references of the 21st Century thanks to the 10 year, 22 Movie Marvel Cinematic Universe and their conclusion, 2019’s Avengers : Endgame. Moderated by ComicBook.com’s Jim Viscardi, go into the mind of the man who began it all and hear where he is headed next. ROOM 7AB

James P Starlin is a legendary American comics artists and writer. Beginning his career in the early 70’s after a stint in the US Armed Forces, he is best known for his space opera stories like Marvel’s Infinity Gauntlet Saga and creating beloved Marvel characters Thanos, Drax The Destroyer, Gamora and Shang-Chi. He is also credited with revamping and popularizing Marvel’s Captain Marvel and Adam Warlock. The movies based on the Infinity Gauntlet Saga and its protagonist Thanos (played by Josh Brolin) are some of the highest grossing movies of all time with 2018’s Avengers: Infinity War crossing $2billion and 2019’s Avengers : Endgame smashing all box office records Worldwide to become the highest grossing movie in history.

Fan-Favorite Television Series ‘Marvel’s Agents of S.H.I.E.L.D.’ Will Make Its Hall H Debut
IN CELEBRATION OF BATMAN’S 80TH DC AND AT&T TEAM UP TO BRING FANS “THE BATMAN EXPERIENCE” AT SDCC