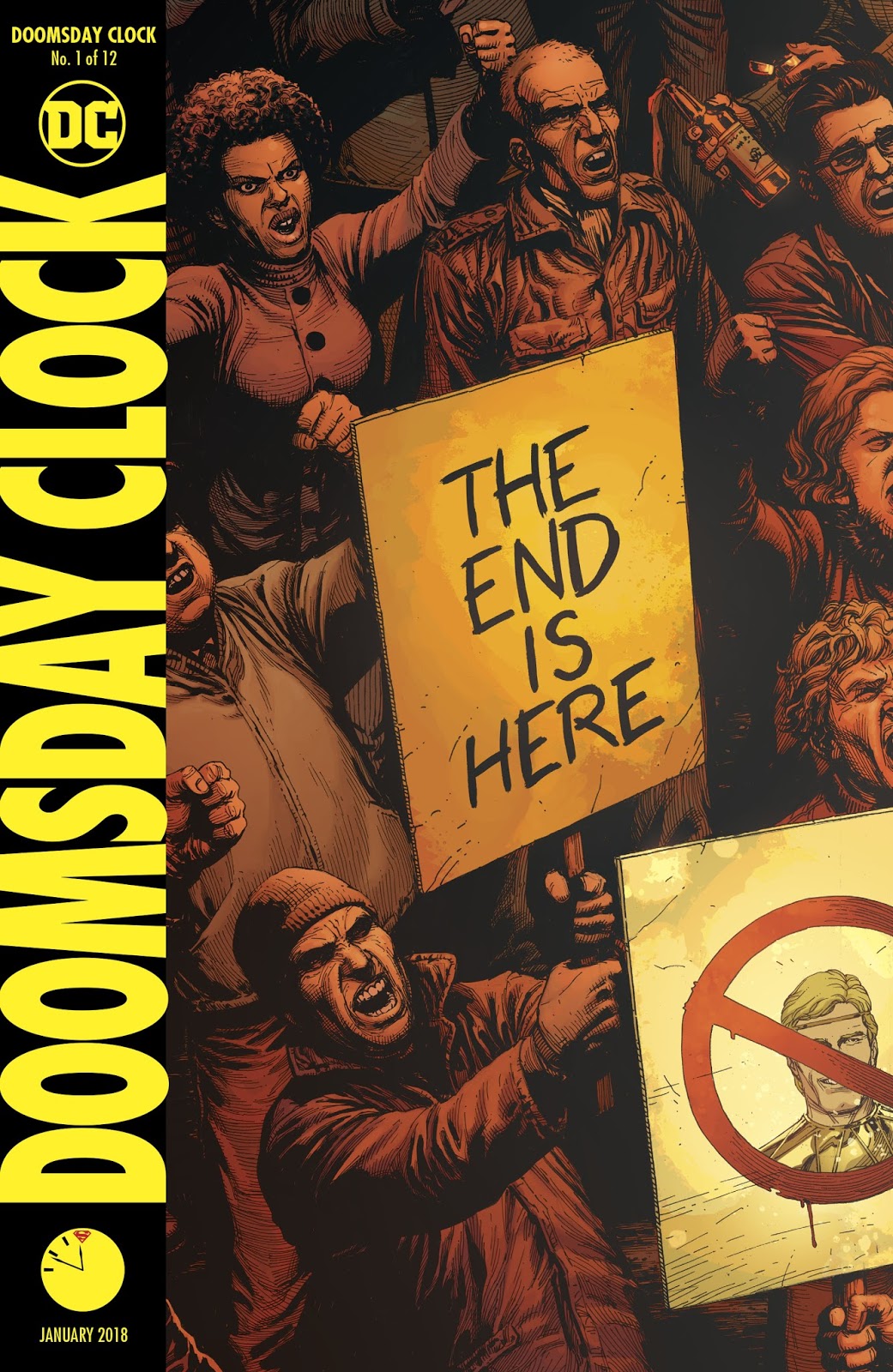 With Doomsday Clock #11 right around after months of delays, it’s time to go over the best moments in the series and remind ourselves that this story is still ongoing. It’s pretty tough to pick out what I feel is deserving of being mentioned so I tried to limit myself for one incredible moment per issue (this story is chock full of awesome panels and story beats so go read it if you haven’t).

1) The Collapse of Ozymandias Peace

At the end of Watchmen, readers were left to wonder what became of the new age of peace ushered in by Ozymandias insane plot. While we see that Rorshachs journal is left at the office of a popular right-wing newspaper, it was left ambiguous as to what was done with the information. With Doomsday Clock, we see immediately that the peace didn’t last long. Seven years have gone by and the world is now in shambles; with Russia invading the now defunct European Union, the American Attorney General killing the Vice President and holding members congress hostage, and citizens storming the border into Mexico to escape the impending doom for the country, it’s a hopeless world that is about to end. It’s sad to see what could’ve been a new age of humanity, only to crumble within a few years.

Its always interesting to see worlds collide, to see characters interact in ways fans wouldn’t have imagined. So when Ozymandias and Rorshach split up to ask for help from the two smartest men in the world, Lex Luthor and Bruce Wayne, it’s sure to be a memorable moment. Ozy wanting to take the smarter one, Luthor, brings the egomaniacs to meet, with Lex even insulting Ozy’s stupidity in believe his peace plot would ever work. Rorshach on the other hand, ends up eating Batman’s pancakes and discovers the entrance to the Batcave by noticing a draft in front of the Grandfather clock that hides it. It leads to a pretty funny moment where Batman confronts Rorshach and accuses him of eating his breakfast, to which Rorshach shamelessly admits to.

As pieces fall into place in the series, there’s one duo out on their own adventure. The breakout characters, Mime and Marionette escape Nite-Owl’s ship and explore Gotham City and get their bearings in this new world. Upon walking around the streets of Gotham, they stumble upon a dive bar housing scary bikers and a amateur comedian getting heckled off stage (via thrown beer bottle). After some altercation with the locals, the two Watchmen criminals do the one thing they’re good at: murder everyone. In one of the brutal scenes of the series, the two lovers cut, slash, shoot and mutilate everyone in the bar. The two toast afterwards before beginning their next mission: Finding the Joker.

The tragic origin of the new Rorshach is a truly horrific one, as its buried within the very horror that was used to unite the world. Driven mad by the psionic pulse that the monster generated, Reggie Long was one of thousands affected and was thus sent to a mental asylum where he was treated. For years, Reggie suffered nightmares and hallucinations almost every day for hours on end. Long story short, he picked up the mantle of Rorshach and started his journey of finding peace from his horror. He’s since teamed up with Ozymandias at this point to help find Dr Manhattan. It was interesting to see how someone could pick up the name of a person that just so happened to be treated by their father, Dr Malcom Long from the original Watchmen series.

This one is another “Watchmen meets DC” moment that was really worth mentioning. By this point, Ozymandias has broken out of the hospital he was being held at after his encounter with The Comedian and returned back to the Owlship. Turns out Batman has beaten him to it and the two begin debating. Batman believes that Ozymandias has something to do with the recent events unraveling across the world. Ozy counters and says the problem is of their own, heroes causing villians to rise and challenge them and keep the world in a cycle of destruction and perpetual war against “evil”. This was an interesting conversation and it was mixed with alot of other details in the background of things building up elsewhere.

Members of the Supervillain community meet in the sewers of Gotham to discuss what their strategy will be. Metahumans are quickly either being weaponized or hunted by various governments of the world. Black Adam has offered sanctuary for any Metahuman who needs it, and the villains considering it. Amongst them, are Mime, Marionette, and Joker who show up and with them, bring trouble. The Comedian has followed them and then begins shooting , causing chaos and the whole meeting to be disrupted. A crazy action scene that was probably one the best things I’ve seen in a comic, watching the Comedian blow out Riddler’s knee with a bullet was my personal favorite.

Up to this point Dr Manhattan has been a no show, but when he finally arrives, it’s stunning. Using his newly cloned pet, Ozymandias draws Manhattan to them and forces him to appear. It’s a moment where everyone in the room couldn’t do anything but stand in awe. Batman seems to be the only one calm, even calling out Manhattan stating that he knows who he is and what role he may have in all of this. Which leads to Manhattan finally explaining part of his reason for stealing time away from the DCU.

8) Superman speaks out against Metahuman persecution

Despite being billed as a Superman story, he hasn’t been in the story much. He does take the stage by #8 and it brings him smack dab in the middle of all the global upheaval. Many countries, including Russia, have been kidnapping citizens that test positive for metagenes and have begun weaponizing them for use in military actions. Superman goes to Russia, after an incident involving Firestorm, leaving America in a tight spot. Superman goes to calm the global community but ends up taking sides. Speaking out against kidnapping metahumans, Superman’s words begin a riot and several people are killed and an explosion as well. This marks Superman as Public Enemy #1 around the world and changes the story for good.

9) Dr Manhattan vs The Justice League

Members of the Justice League, old or current, team up to follow a source after the explosion in Moscow. They find out there’s a being on Mars that matches the energy signature, printing a response. Upon arrival, they find Dr Manhattan waiting ominously for them. When trying to talk peacefully, the heroes realize Dr Manhattan is part of the reason the world is in such a state of tension and cold war. Wasting no time, the heroes try to take Manhattan down which ends up being the worst mistake ever. The almost godlike being takes them easily, counteracting every move they make. They get close to taking him down, but Manhattan gets the edge and defeats every single member of the League. What a battle it was indeed.

Finally, we get to the part where we begin seeing Manhattan’s meddling in the DCU be explained. Manhattan has seen that the entire DC multiverse revolves around Superman, and that no matter what, this particular universe dubbed the “Metaverse” responds to outside changes and will always try to self correct. No matter what Manhattan does, Superman is always put front and center as the symbol of Hope. Manhattan realizes he can only do so much, he’s already pulled out the JSA and Legion of Super-heroes out ot history and caused the future of the universe to be thrown into uncertainty as there may possibly be no future for anyone.

Those are amongst the best and crazier moments of the series but there are others in the story. Doomsday Clock #11 comes out Sept 4th and is sure to provide more crazy moments.