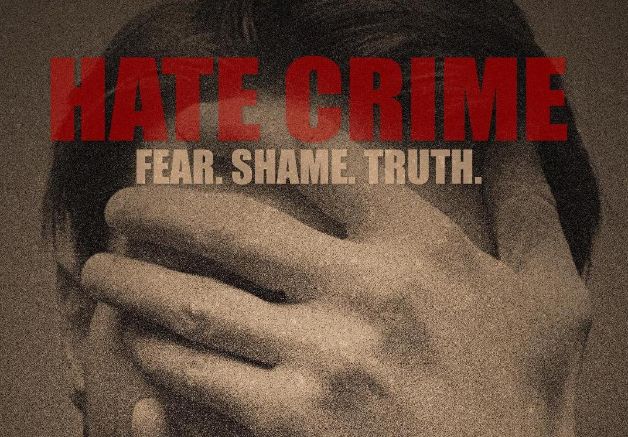 One of the most crucial elements to any artistic medium is the passion for creating something that speaks to people. There is a lot of work that goes into the craft of filmmaking and while big studios have the resources to make highly impactful and entertaining blockbusters often times the smaller films are brushed to the side in favor of those massive endeavors. Independent Cinema is a valuable component to the art of Cinema as a whole. Independent artists as well as small studios often do this for the love of the art and it can show in some films, which is why I think it is important to give smaller creative voices a platform to represent their art and smaller films deserve the same love as big studio pieces. With this in mind I want to look at a film I got the pleasure of seeing early. Set to be released this Fall, Hate Crime is an interesting character study that deserves to be looked at and analyzed in a world where audiences are demanding more from the cinema they view. Here is our spoiler-free review of the upcoming drama film, Hate Crime.

The story revolves around two sets of parents dealing with the State execution of one of their sons due to him murdering the other son because he happened to be gay. Both parents struggle with the loss of their children and the ramifications that come from mourning, depression, and repression of one’s true self.

The film tells a simple story in a fairly simplistic way. It focuses less on the action of the characters and more on the emotional trauma that this entire event is inflicting upon the parents. Their journey is one of emotional pain and trying to heal from this horrendous tragedy. It even explores themes of one’s own identity and sexual orientation. The story is an emotional one and one that I think works well for the most part. The dialogue isn’t particularly fresh, but the story is an interesting enough one to be told. I was never bored by the film or felt that it dragged on, but I did notice that it has some of the writing issues. I felt like its exploration of LGBTQ themes was done with the right intentions and with the heart in the right place, but it wasn’t always handled quite well. Regardless the film still took the time to tell a story about family, forgiveness, and love. That is felt throughout the entirety of the experience with a focus on empathy and understanding that ends up being the driving force. The story was quite well told for what they were going for even if at times it didn’t quite have the polish needed.

This film is unique in that the actual talent behind this production are people without nearly as much filmmaking experience as some of the other directors and writers I’ve covered, but nevertheless first time writer Jonah Tapper and more established director, Steven Esteb work together well to deliver a fairly competent small film with empathy. They are able to tell the story they wanted to effectively without it feeling muddled and they were able to lead every element to a well structured and interesting result. Esteb was especially proficient at directing the cast, which happen to be the film’s strongest element.

The cast of this film were the single best component and even when some elements may have fallen behind they picked up those pieces and delivered an emotionally resonant experience. The film stars Kevin Bernhardt and Amy Redford as the Brown family whose son is being executed. The film mostly follows their journey as they are at their home trying to understand that these are the last few hours that their son will be alive. Their pain, love, and emotions are beautifully portrayed through the quiet and the loud moments these two characters share. They bring life to this material and they deserve recognition. The other set of parents are played by John Schneider and Laura Cayouette. While their role is much more minimal the impact they have on the journey of the Browns is very important and the scenes that Schneider has does directly impact the main themes of the story. Their performances are solid and they carry the characters they inhabit with the needed weight to tell this story. This cast is extremely talented and they really do make the film as engaging as it is.

The film is an independent production and it is most telling in its technical side, but that doesn’t mean that it is in any way bad. The cinematography in the film is fine, but it doesn’t take any risks to do anything different than what is expected. This minimalistic approach works, but does make the film feel uninteresting. It is not a visually impressive film, but that isn’t the point seeing as this film could have just as easily been told as a stage production given its focus is on the dialogue. This is a visually decent film, but it doesn’t feel unique in any particular way. It is competent in what it does and that is fine.

The audio production of the film works quite well. There is a noticeable lack of consistent music, but that helps to elevate the importance of each word said. It gives the actors the room to express themselves without the aid of music to indicate when to be moved. There is music in important sections, but for the most part almost any scene with dialogue the focus is on ambient noises. The audio engineering for the most part works as well and everything is clear. There’s no discernable issues with a lack of clarity, which can often happen in independent films. It’s a sonically decent film that gives more weight and work on the part of the actors and the story, which in the end is the most crucial part of this particular experience.

Hate Crime is a fascinating film. It tries to be a family drama on a smaller scale that tries to show empathy to the LGBTQ community. It isn’t perfect by any means, but the film does seem to come from a place of passion and it shows. It’s a film with a heart that is obviously firmly against intolerance, but also takes the time to teach empathy. I do recommend this film if you want to see a story that is a character study dealing with some incredibly heavy and relevant topics. It is a solid film that deserves recognition even with all of its faults.

Jim Henson’s Legacy Of Puppetry & ‘The Dark Crystal: Age of Resistance’
‘The Boondocks’ to Return on HBO Max