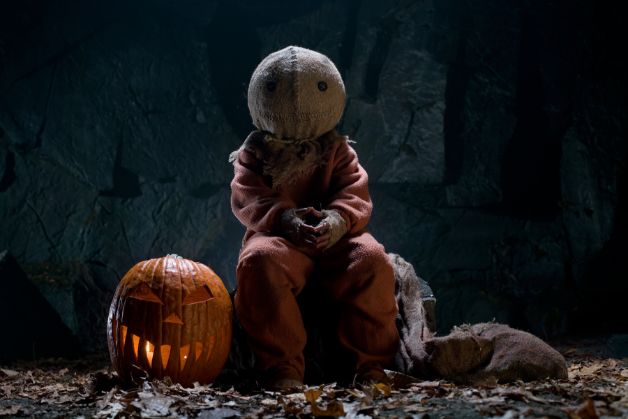 It is the end of October and the arrival of Halloween. This marks the end of this year’s Month of Halloween on Up Your Geek. Even though it may be reaching its end I still wanted to discuss a topic which I have a huge passion for and that is Film that are excellent.  I love excellent films that are worth discussing, watching, and using as tools to get into the Halloween Spirit. I love horror as well as the supernatural and my favorite medium of experiencing those two things is through film. It is a visual medium that can so effectively take you to another world and end up leaving an impression on you whether it just happens to brighten up your day or makes you stop and feel something. The power of Cinema in all forms is impressive. There are so many films that I could easily list here that perfectly sum up the season, but I chose 3 films that I feel are some of the best examples that will easily get you into the mood for the Holiday whether they are truly scary or are just for fun. Here are 3 Great Films perfect To Watch During Halloween.

While it is reasonable to assume that there would be more films that take their time to use the Halloween season as a backdrop and main theme for their narrative you would be surprised to see that there is a lack of fairly popular films that take full advantage of the Season outside of the Halloween franchise. In 2007 this changed with the release of the cult classic anthology horror film, Trick r’ Treat. It tells 5 original scary stories with their own characters, twists, and monsters with each of these stories being interconnected by the monster mascot of the film, Sam. The narratives of the films often cross paths and the events take place on Halloween night with a variety of interesting characters that make each story really effective. The stories range from scary to comical and that line is often blurred intentionally to celebrate the inherently fun nature of the Holiday.

The film is one of the best Horror Anthology films I have seen and that is mainly due to the craft and care put into every aspect of the film with the entire cast giving great performances balanced with special effects that use both practical effects and CGI effectively. What sets this apart from most Anthology films is that instead of having multiple creators telling their own short stories you have one writer/director leading the vision for the entire film. In a way, having the singular focus keeps the tone consistent throughout the film and proves to be massively successful in how the stories find their way to cross paths with one another, which is one of the best things about this film. The film is also beautifully shot really well even though it happened to be a smaller scale production the film looks like it has a larger budget than it does. It uses the Halloween colors especially orange to such great effect and that design seeps into every frame of this production.  There is so much care in this film from the technical side to the creative side that it is an extremely fun and often times spooky example of how to make a great horror film that embraces the season to its fullest potential.

The character, Sam steals the show for the majority of the film and easily became an extremely popular creature with toys, figures, and cosplay popping up still to this day. While initially it went under the radar the film has gained quite a large cult following because of how lovingly it uses Halloween as a theme and in a sense as a monster in the film itself. It’s obviously well thought out, well crafted, and a perfect film to sit back and enjoy on Halloween night with the lights off.

Last week I released an article discussing 3 Great Video Games that I recommend and on that list I mentioned the Ghostbusters game. While that game is worthy of your attention, it demands that you have knowledge of the film that started it all. The original Ghostbusters was released in 1984 was a landmark film that changed how one can view Blockbuster entertainment and its relation to comedy. The story follows 3 scientists working together to find work after their grant at the Columbia University was pulled. With their lives and careers on the line they work to continue their research into the paranormal privately and end up creating a Ghost disposal service known as the Ghostbusters. While starting their new found careers an evil spiritual entity begins causing havoc throughout New York city setting off a chain of events that only the they can stop.

This film is a true modern classic mixing elements of horror, sci-fi, and comedy to create one of the most unique films of all time. It isn’t surprising to think that it was a massive hit in its day. It is a film that remains still as entertaining and well crafted as it was when it originally hit theaters. The special effects beautifully bring the Ghosts and monsters to life while the story keeps the main characters grounded and gives each of them something identifiable about them. The Ghostbusters are clearly defined and portrayed excellently by Harold Ramis, Dan Akyroyd, Bill Murray, and  Ernie Hudson. In addition to the comedic talents of those 4 the film also stars Sigourney Weaver and Rick Moranis giving standout performances in equally crucial roles to the plot. This cast had comedic talent which was used in improvising on the set and they had natural chemistry brilliantly playing off of each other without a particular actor outshining anyone else. The film strikes the perfect balance of comedic moments and plot relevance, which sometimes comedies have an issue with. This striking a chord between when to play up the comedy and when to deliver the narrative beats exemplifies how excellently crafted this film is from the ground up and the editing deserves as much credit maintaining an excellent pace throughout.

The film is one of my all time favorites and while I can watch and enjoy it any time of the year it works phenomenally if you’re looking for a Halloween movie that leans much more on the comedy and the spectacle as opposed to the scares. It’s a film that can easily give you Halloween vibes, while also making you laugh and being a bit more appropriate as a film that a family can watch together.

The 90s was a time of great change happening culturally and politically. The internet was just taking off and it was the perfect time for horror to shift into something completely different. In 1999, one of the most bold horror films of all time used the burgeoning internet and pulled a massive stunt which in part convinced the public that it just so happened to be a documentation of real life events. The Blair Witch Project is a found footage style horror film that follows three young college kids as they head into their local woods in Burkittsville, Maryland in October of 1994. They were making a documentary for class on the legend of the Blair Witch. A local legend that is widespread amongst the small community they come from. When entering the forest they must deal with the potential that the Blair Witch is more real than they expected.

There is no way one can discuss this film without giving credit to how genius and clever it was for the time. It was made for an exceptionally small budget and brilliantly used a marketing campaign that brought attention to this downright creepy film utilizing a website to present clues in addition to releasing other materials that were related including a 40 minute mockumentary discussing the legend of the Blair Witch. At the time this style had not been used to the way that is has since so the film looked and felt like a series of tapes that someone discovered and edited together making the film intensely eerie. Attempting a film in this style was incredible in that it allowed them to use their lower budget to their advantage and allowed the cast to be people who weren’t known. This made it feel all the more real. Even knowing that the film is fake it is still an impressive horror film with quiet moments genuinely being the scariest parts of the film. A lot of other Found Footage style films have a larger production value, but aren’t nearly as scary because they use too much special effects. This film’s scares are all based on the building tension and one’s own imagination. It is definitely a worthy experience for those that love horror and are looking for something that doesn’t follow the typical route to reach that horror.

This film is  genuinely scary and it was a game changing production that has inspired so much great content and copy cats to come about over the last 20 years. The unique presentation and creepy tone makes this film a perfect one to watch during Halloween if your goal is to enjoy something that will get under your skin. It’s perfect for those that love atmospheric horror that was an inspiration to many filmmakers. It is also perfect for watching during the spookiest time of the year.

All 3 of these films are classics in their own right, whether it be because they influenced an entire generation of filmmakers or because they have gained a cult following. The effort put into these projects is tangible and the films stand the test of time. With these three very different films I hope that you consider any of these recommendations for viewing on Halloween. They are films that I find myself going back to whether it be for inspiration or to just have a great time.

Halloween 2019 has come to a close on Up Your Geek for 2019. I hope that you all have a safe and Happy Halloween with the ones you care most about. Thank you for following us as we had our Month of Halloween articles and I hope to continue doing this as a tradition for years to come.