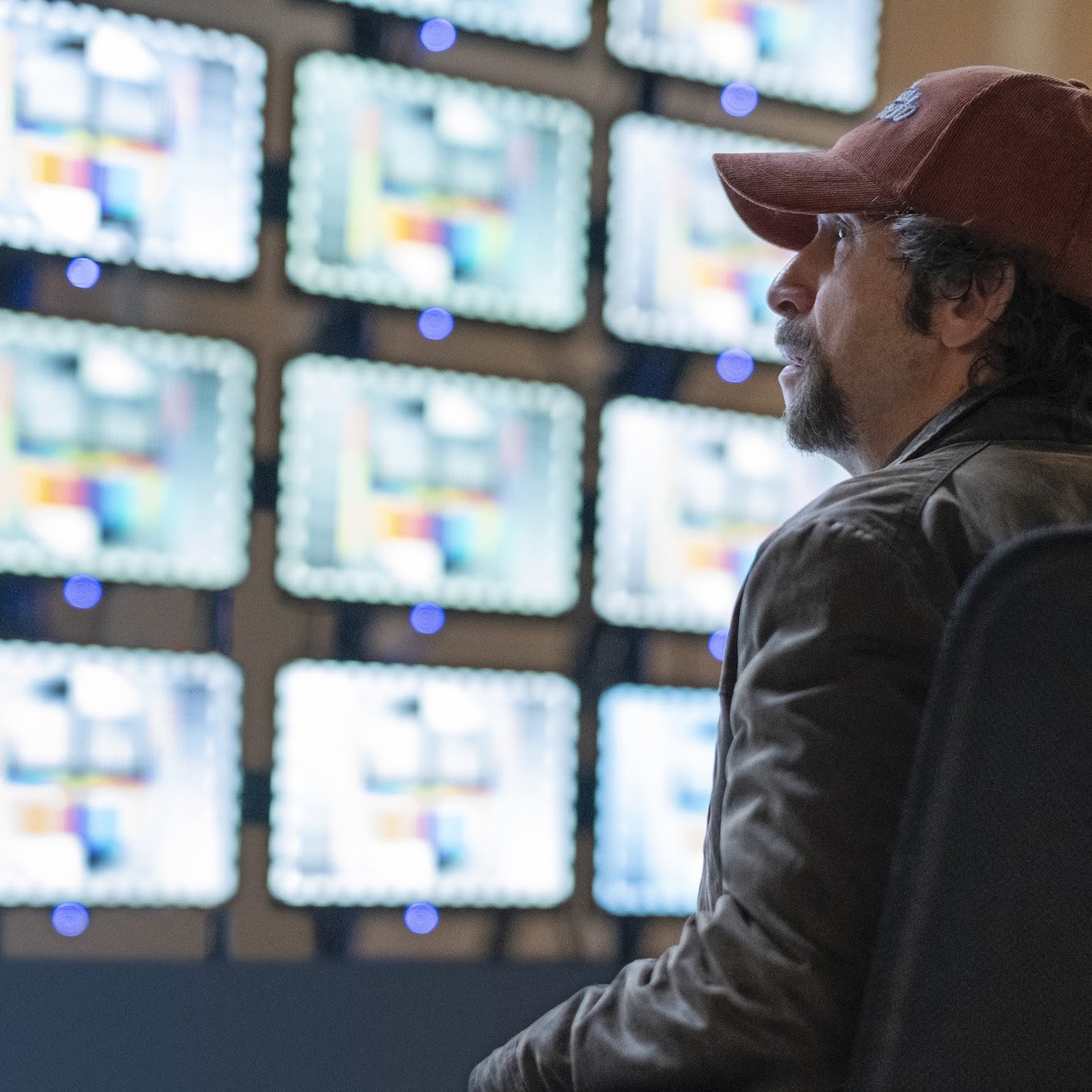 What a ride Watchmen has been so far, and we’re here to talk about the next chapter of the insanely good sequel-show. This episode focuses on the origin of a young Looking Glass and what Ozymandias is doing on his end. Let’s get started!

We begin with a flashback to 1985 in Hoboken, New Jersey and we watch as a young Catholic boys group attends a local town fair to preach the gospel as the world sits on the brink of destruction, one of the boys is Wade AKA Looking Glass. Being that this is the night of the D.I.E incident, it’s gonna be the worst night of all these people’s lives. Interesting to see that Wade was a determined Catholic in the past, the Squid must’ve changed his entire outlook on life. Wade is lured into a hall of mirrors by a young lady, who at first seems to be saving him from the Knot-Tops that are bullying him. But as it shows, the girl just wanted to taunt the young man for his mission and steals his clothes by seducing him. And that’s when it happens…

A loud high pitch ringing and an explosion signals the sinister event. Wade awakens to do the hall of mirrors is all shattered, with the high pitch ringing in his ear and bodies of local residents dead on the streets of Hoboken, as it’s not far from NYC. The three million dead from D.I.E includes these and more from around the tri-state area, with Wade left screaming as the camera pulls out and we see possibly hundreds of dead in the streets, with only a handful of people left alive and possibly scarred for life. The camera pulls out all the way to NYC, as we see the tentacles thrown about the buildings and finally, the Squid itself, dead in the middle of the Institute of Transdimensional Studies.

This rendition of the iconic ending to Watchmen is even more terrifying here. (Credit to: HBO)

We cut to the present and see a promo video of a NYC touring attraction, trying to convince people to return to NYC since it appears that after D.I.E, people didn’t want to visit the city in fears of another “attack”. Wade watches the control group watch the promo and the look of his face is shows he’s unconvinced: he believes the threat is still there. And he knows that no one wants to visit the site of humanity’s darkest moment.

Wade returns to the police precinct, where Laurie is giving out orders. To find Kalvary, they must first find where they meet and that means the church in which they recorded their video in. As they start their investigations, Angela meets with Wade and wants to see where he is with the pills she gave him to analyze. That’s when Laurie calls Wade in for a talk. Laurie begins going over his file, finding out he was in Jersey the night of D.I.E, and noticed how his mask is made of a material, Reflectatine, that is said to protect one from the psychic blast of a Squid, like the one in 85′ sent out upon dying, giving people within the radius nightmares for years and years to come. It seems all Laurie wants to just go over basics of Wade’s file with him, get a sense of who he is.

Wade goes home to end his night, even revealing that his hat has Reflectatine on the inside as well. Wade is honestly still terrified of another squid attack that he prepares himself for it to happen at any moment. He also puts on his mask, in his own home, because he seems to feel safer with it on. Sitting down to watch the America Hero Story, Wade jumps when he hears an alarm go off and runs out to his shelter to deactivate it. Only, the alarms keeps going off and he ends up ripping the control box off the wall. The alarms seems to be a simulation of a Squid attack, meant to train owners to properly react in a case of a real incident.

Next day, Wade gets a message from his ex about the pills. His ex wife works at a animal cloning facility, interesting to see that not only are people being cloned (over in Ozland) but also peoples pets. Anyway, the pills turn out to be Nostalgia, which also shares that name with a fragrance that Ozymandias created for his company back in the 80s. Will told Angela the pills helped with his memory, but Wade’s ex says that those pills were outlawed because instilling memories into pill form lead to psychosis. She mentions a small tidbit about their marriage, and how Wade was scared she would run off with his clothes and leave him naked so it’s safe to say Wade hasn’t really trusted women since that night on top of everything else.

Looking Glass’ home life is anything but satisfactory. (Credit to: HBO)

A support group for those with trauma related to the Squid incident shows Wade as the group leader, helping people handle their trauma. He meets a woman and the two head to a bar to discuss their trauma and how they stack against each other. She tells him how she handles her trauma for that night by watching a movie about the night and how it helps her face her fears. Wade realizes this woman shares the same worries as he does and how they’re both still scared shitless. However, it’s then that bombshell drops on Wade. When the woman catches a ride with a friend, a lettuce head falls out the truck. Knowing that the night the officer was shot by a Kalvary member he also threw in a piece of lettuce, Wade immediately concludes that the driver could be Kalvary.

Not wanting to lose their only clue to follow, Wade tracks the truck down to a old department store where the woman and driver are both wearing Kalvary masks. The ominous clock ticking as he searches the truck can mean something sinister is about to occur, like the White Night scene. Inside the building, Wade conducts a search and finds that the church setup from the video is actually inside the building. Suddenly, a blue light appears and a portal opens up dropping basketball and Wade hides from the coming Kalvary members.

By what the guy says, it appears that Seventh Kalvary is working with some sort of teleportation technology and Wade decides to hold them all at gunpoint. Well it seems this was all intentional as the woman he was with reveals they setup the lettuce to fall so he would follow them. They seem to be offering Wade some sort of invitation to the group as she explains she set him up. Even the backup he called for was them hijacking the signal, making the nervous Wade even more so. They take him to a room with a multiple monitor setup and the next reveal is that Senator Keene is actually Kalvary too!

Senator Keene confirms that the teleportation device is the same as the one the Institute was using when the Squid dropped in. Keene also confirms that Judd was Kalvary too and they both commanded their own teams within the group. Keene promises to show Wade the truth behind the D.I.E in exchange for Wade to throw Angela to the FBI for the murder of Judd. Wade presses play…and watches in horror as he learns that it was Ozymandias who orchestrated the entire incident, killing millions and traumatizing millions more, even stating he will causes several smaller scale incidents to push the world to unite entirely. Ozy creates the video for Robert Redford specifically, as Ozy has chosen him to be the next President after Nixon, and with Ozy’s help how Redford can lead the nation into the next chapter of it’s history. Wade can’t believe his entire life of fear was all a hoax and he can’t believe that Kalvary is actually appearing to be right.

Then we cut to Ozy who is in his fifth year of captivity wherever he is by whomever has held him. He prepares to be launched in the sky to escape his prison, with the aid of his servant clones. Once being launched, Ozy finds himself in space overlooking a planet, happy that his plan has worked so far. He sees the piles of dead clones he launches himself and begins to gather them into a pile, assembling them in a specific way. Just as a passing satellite crosses over, it’s reveal Ozy has spelled out “Save Me” with the frozen corpses. But before he can fully celebrate, he’s yanked back into his hologram prison by the masked horseman from a couple episodes ago. The man states that since Ozy continues to break the rules, he will be placed under arrest.

Finally, we see Wade dealing with the aftermath on what’s he’s learned. His world has been shaken to it’s very core. He returns the pills to Angela and says he wants to help her, but Angela reveals the truth behind the pills owner and unbeknownst to her and only Wade, she’s outed herself to Laurie, who had bugged the tiny cactus on Wade’s desk. Angela swallows the pills to deny Laurie from taking it, as Wade pulls his mask down in slight shame. Wade returns home, throws away his new alarm system only to take it back, with a Kalvary van pulling up to his house, guns loaded.

This was an amazing character centric episode that gave us more answers than questions for once. I can’t stress enough how well this show is made and how intriguing the plot is so far. Damon Lindelof was truthful when he said he would “remix” the original comic to create new material. It gives the show a sense of rhyme to the source material.

Rating: 10/10. Another perfect episode crafted to be the perfect next chapter for a show that’s slowly ticking towards a shocking ending, just as Watchmen did before.