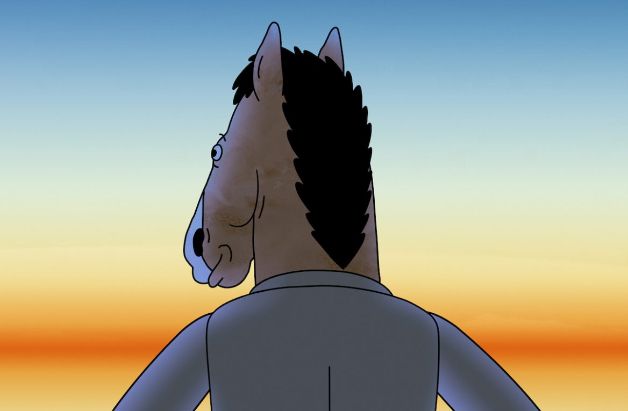 The ways in which we consume media has completely shifted in the last decade or so with the birth of streaming television shows that are given the same budget and resources as cable. The new art that has been born from streaming has changed a lot of ways in which we discuss the craft of filmmaking and television production. Animation is just as important a topic to cover in this modern shift and a stunning example of the potential for further growth and exploration came in 2014. Netflix’s original series, Bojack Horseman was set upon the world and while having an initially rocky start the show quickly found its footing and easily became one of the most critically acclaimed series of all time. The series has just released its last episodes. The show has greatly evolved over its 6 season run into one of the most underappreciated shows of all time. It quietly explored some of the most fascinating themes, while also embracing great comedy and it is the best time to look back in a non-spoiler way to analyze the quiet brilliance of Bojack Horseman.

One of the most inherently complicated things one can do is to try to take 6 years of storytelling and to quickly try to explain why this show works as well as it does. Bojack Horseman is a show centered around the character of the same name. Bojack was a famous television star back in the 90s, but since then his career and his life has further spiraled. He’s an alcoholic who has a rocky past with all manner of substances and a terrible habit of ruining everything good in his life especially the people he loves and cares for. The people around him include Diane, a writer consistently working to create her own identity, Princess Caroline, a talent agent trying to chase happiness through her work, and Todd, a complicated mess of incompetence and happy go lucky attitude who has a knack for being very lucky at times. These characters all inhabit a World that humans and talking animals share.

The World is beautifully crafted with vibrant animation that breathes life into the well written characters, who are voiced by some of the best comedic talent. This  includes Aaron Paul, Will Arnett, and Alison Brie. They all give incredibly deep and layered performances balancing the comedic tone the show often has with the very serious moments that often occur. That dramatic balancing act is extremely difficult to show using just your voice, but each member of the cast gives an incredible performance with Arnett at the center finding that balance seemingly effortlessly. The show was created by Raphael Bob-Waksberg and he mentioned that his inspiration was based on the existential loneliness he felt living alone in Hollywood and how that loneliness was something unique juxtaposed against the vibrancy of the very lively city. This basic concept is well executed by the animation department that works within the tools they have to bring a sense of legitimacy to the World filled with more site gags than one could even catch in their first viewing. The life that is breathed into every scene has kept the series looking visually distinct and it adds to the overall quality.

The technical aspects of the show really do present the content in such an excellent package, but the heart of it is the maturity of the storytelling present which is rare in comedic Western Animation.

There is so often a disconnect of the understanding of what makes something  “Mature”. So many people tend to believe that maturity relates to the adult content present within the work, but what Maturity truly means is the depth of the work and how that reflects a more nuanced frame of reference. This type of maturity isn’t present within a lot of Western Animation. It’s hard to find a series that attempts to deal with harsher themes in a direct way intended to be relatable not only to those that created it, but also the audience that may or may not have experienced the same things. Bojack Horseman beautifully has been presenting truths in an entertaining package for over 6 seasons and it has been overlooked because it happens to be animated.

Every character on this show is deeply flawed, but that’s partially due to their immediate relationship with Bojack who has succeeded in making their lives worse even when it isn’t his intention to do so. It’s easy to write Bojack off as a villain character whose life is bad because he chose it and that is ture, but he also loves deeply. He does care for many people in his life except for himself. He hates who he is and he seeks the attention he was never able to receive as a child while living under his abusive parents. This cycle of abuse has led him to make choices that put himself and others in bad positions and he is never excused for this behavior. Even when good things happen to him it’s soon followed up with his own ability to sabotage his own happiness or with the consequences he’s receiving from harming someone else. This depth to his character traits is one of the main points of the show. It asks the audience to look into this individual’s life and while it may be easier to laugh at his bad antics it also wants you to feel genuinely sad not only for him, but for everyone around him. Each character has moments of depth where it doesn’t want you to laugh at their pain. It wants you to see their humanity and not look away from the harsh truth of life.

The maturity of the show has led it to employ different themes and topics and find new ways to deal with truths in ways that a lot of live-action shows and films have struggled with. The show excellently juggles several plot points while bringing up themes of depression, loneliness, drug addiction, and most crucially one’s own mental health.

The surface level appeal of the show is something that people have a difficult time getting past, but when you do you find a show that attempts to normalize discussions around pain. It doesn’t want the audience to bury the issues that are present. It wants you to acknowledge the problems in your life. There are several moments in the show where characters quite frankly talk about important issues and the questions asked are often those that I have asked myself. It’s scary to feel so alone and it is difficult to acknowledge when you need help, which is why this show has some of the best and most accurate depictions of the feelings surrounding anxiety and depression, which can be a deadly combination. So many shows treat Mental issues with a broad brush and often don’t take the time to understand the complexities of those conditions and what can happen if you ignore it. We’ve seen exaggerated portrayals of it, but a more common condition such as anxiety is examined with patience and care. It’s presented in a real way, which is incredible seeing as it so happens to be an animated show about talking animals and people living together.

The show beautifully knows what it wants to do and it gives the audience enough information to empathize with the characters and to recognize the satire so often at play with plenty of very sly references to real life people and incidents. It is why it has not only gotten better at layering the comedy with the drama, it also had the unique quality of getting better at doing so every season. This is why the ending of the series is the best the series could have hoped for. It answered the relevant questions, while leaving a gap wide enough to sit with the themes present and for you to question those themes and how it may relate to experiences you’ve felt.

Bojack Horseman’s final moments really reflect upon the show’s quiet beauty. It knew what it was doing and for a lot of people it flew under their radar. I hope that for those that have yet to experience it to give it a shot. I discovered it late and latched onto it when it expressed issues in ways that I couldn’t. I hope that as time moves forward the show will be remembered for attempting to touch on so many relevant topics, while maintaining its comedic charms. It is easily one of the best animated shows I’ve seen and it should be remembered as such.