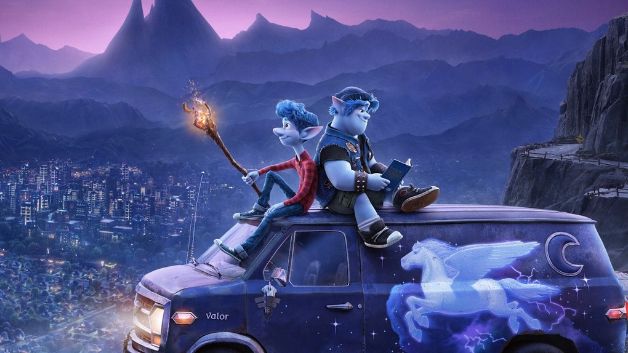 Disney and Pixar have collaborated to consistently make interesting films that more often than not stand apart from what the team at Disney Animation is doing. Pixar is more distinct in their voice and it is the reason why their films revolutionized animation in the first place. They don’t focus on musicals, but on telling unique stories in distinct ways that keep Disney having original content being produced. Pixar has done many sequels and work on their properties, but they also take time to foster original concepts. This is very exciting in a time dominated by sequels and remakes. Pixar’s latest film Onward is one of these original stories that take the extremely talented team of creators at Pixar and uses them to create something special that blends a good story with animation that looks phenomenal in an art style that is very distinct. Here is our Spoiler-Free review of Onward.

The film is set in a world that shares a lot of what our world does, but the people are based off of mythical creatures and the plot follows a time when they have forgotten about the powers of magic. The characters rely on modern technology to continue living their lives. This is until two teenage elves find a magic staff left to them by their father who has passed away. The staff is attached with a spell that will allow them to see him one last time, but the spell doesn’t quite work so they must embark on a journey to find the crystal that will allow them to complete the spell and see him again.

With any narrative that follows the “call to adventure” hero’s journey archetype it can be hard to find some originality within that format, but somehow Onward manages to find some new things and keep on expressing originality through its fun plot. It may not be the most original thing that the studio has done, but it certainly seems like this film came from a place of true heart and care, which is why I think its story may be its strongest element. It had a great sense of humor undercut with an emotionally resonant story that I don’t want to give away here. If you have ever lost someone close to you and you had the opportunity to see them again you would strive to take that opportunity. It would mean everything to you. The film beautifully handles this topic very well and it keeps reminding me of why Pixar is as beloved as it is. The plot is not as well handled as some of their other films, but it certainly deserves recognition for the love that can be felt from it.

A great film is only made possible from the talented people who put their energy into making it a reality. This film was written and directed by Dan Scanlon, who previously directed Pixar’s Monsters University. He also has experience working in multiple capacities on their other projects and this film in particular was one that was truly his in a lot of ways. He has explained the very personal connection to the story of losing a father and that connection is felt in a lot of the ways in which he has directed this film working with all of Pixar’s departments. The film is very competent in every moment and his direction of the animation is excellent. It is able to fully realize the emotional narrative as well as the artistry of creating this elaborate fantasy world with real world influences. The talented individuals in each department excellently contributed to this production, which is not surprising. Scanlon’s talent is even present in the way he was able to work and get the best out of the extremely talented cast.

The cast is made up with some great talents across the board and each actor brings each character to life so much so that in a lot of instances you aren’t thinking of the actors behind the voices while watching said film. The cast includes Tom Holland, Chris Pratt, Julia Louis-Dreyfus, and Octavia Spencer. They all deliver their performances that fit their individual characters as opposed to trying to amplify their own personalities onto these characters. Tom Holland and Chris Pratt portray the Elf brothers and do so with a lot of depth and care. They play off of each other very well and Tom Holland in particular gives a stand out voice performance giving weight to the emotional center of the film. Their talent breathes life into a script that already had heart. It creates something truly engaging and every line of dialogue hits harder because of these talented performers lending their voices.

Animation is one of the most difficult forms of artwork that any team of people have to work with. They have to all be lined up together to replicate the frames of each scene perfectly so that the power of the script comes through in every sequence. There are so many films that attempt to do what Pixar does, but don’t quite reach the same level of quality. They helped to launch the art of 3D animation and they are constantly working to elevate the art form with new technology and new voices. This film in particular has an incredible team of animators that are so dedicated to creating a cohesive whole that works well with the script while also taking into consideration the stylistic designs of each character and the actors who portray the characters. It’s hard to not enjoy a Pixar film from a technical standpoint alone. Their films always feel polished and that can often be rare with certain big budget film studios pushing things out faster than they should. It’s a beautiful looking film that succeeds on all fronts from the visuals alone.

While the visuals are stunning the audio has to match the audio appropriately and luckily this film succeeds. The score was composed by Mychael and Jeff Danna who beautifully lend their talents to a score that embraces the heartfelt moments with enough action and adventure for the other sections of this film. Their score isn’t the most memorable, but it’s handled well to the point of working to the film’s benefit. The sound design is also quite good. It’s an interesting process to do sound for animation as opposed to live action. You have to design it in a way that makes sense for this fictional animated world you have created and Pixar is really good at making that true for all of their films. These elements aid the visuals in telling the story and they succeed at doing so especially in this film.

Onward is a refreshing thing to see from Disney and Pixar. Some originality is nice as opposed to some of the remakes and sequels that have been produced over the last couple of years. This film tells a small scale story with a lot of heart and that goes quite a long way. It may not reach the heights of some of their other more successful films, but that doesn’t mean it’s not worth seeing especially if you’re a fan of animation. I recommend  checking it out when you have the opportunity to see it when it opens up in theaters this week.