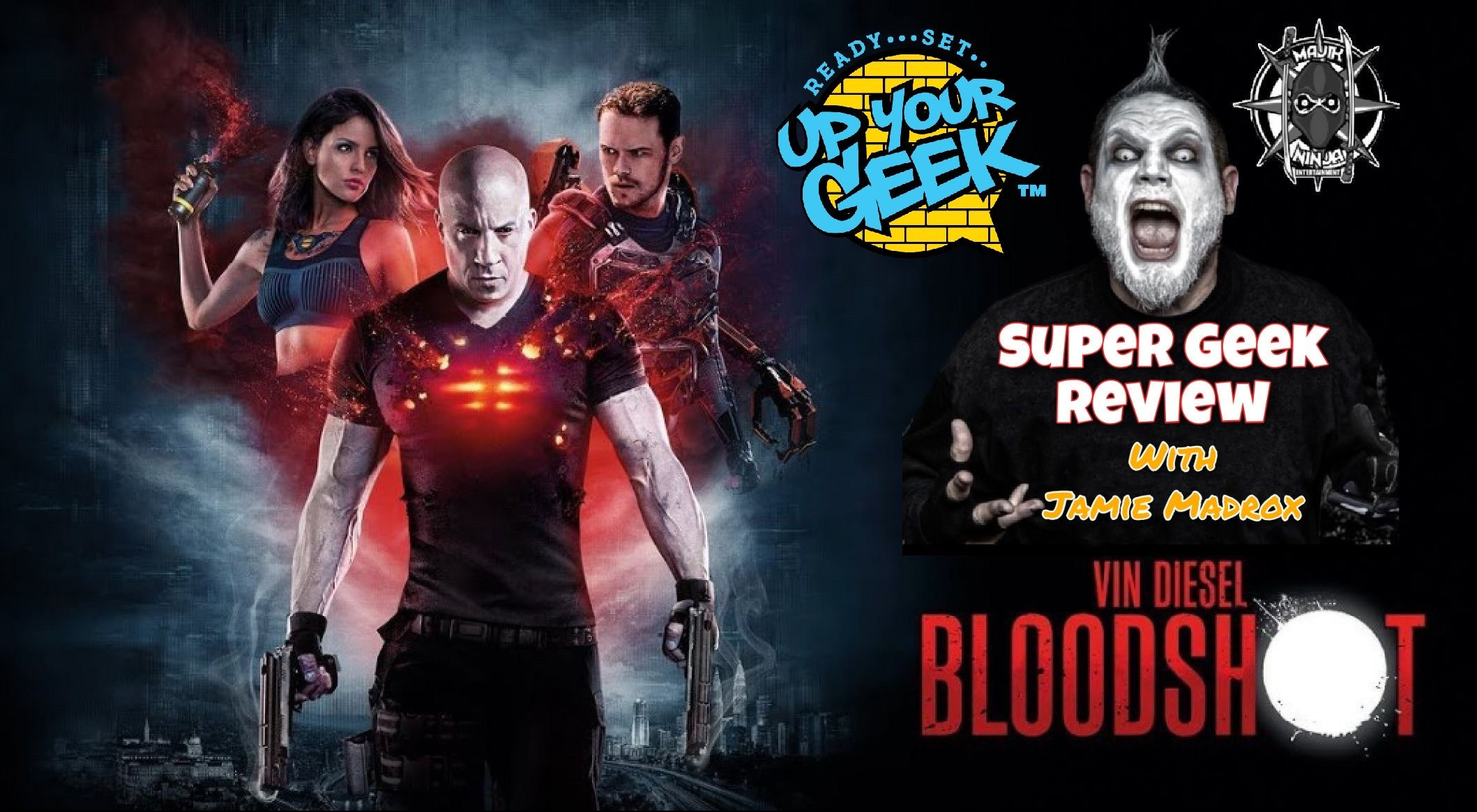 Hello, and welcome to the first edition of Super Geek Reviews with Jamie. I wanna start off by expressing my gratitude to Up Your Geek for opening their loving arms to welcome another nerd in the family.

Side note: Although this first Super Geek Review is movie based, not all my reviews will be geared in that direction. I plan on covering some other Super topics in the future. So stay tuned! With that said let’s get started.

Where shall I begin? I’m familiar with Bloodshot from the Valiant Comic series released many years ago. He always visually looked like a zombie or evil take on The Punisher to me, more or less, with automatic weapons drawn or firing in most of the iconic images I can recall. His signature look with ghost white skin and blood red eyes and red circle on his chest… yes that’s the character I know as Bloodshot.

Pressing play on the movie adaptation I found my self watching Vin Diesel in what starts abruptly as an army movie that quickly establishes him as the baddest MF in camouflage. Like a builder movie the first act is a bit slow but needed to honestly set up the who, what, and why Bloodshot is.

**Warning Some SPOILER Shit coming up**

The additional CGI effort to pull off Bloodshot’s regenerative process was really cool and by far the sum of most of the better parts in the film in my opinion. My biggest upset was not that Vin Diesel isn’t the best actor; it’s not that the only name I can recall from the whole movie was “KT”; and it’s not that I was disappointed because I thought I might have seen cameos of other Valiant Comics alumni in their comic book authentic costumes… no. My only problem with this movie is that in some ways it’s implied (I think) that Bloodshot, although dead, needs to look like Vin Diesel the actor yet at times “change” when emotionally heightened into the comic book representation of the Valiant Comics character. And if I got that right, then that’s some ol weird Hollywood shxt to me. Why not just have him look like that the entire movie, with normal Vin for throwback and time lapse scenes? But what do I know? I’m just a fan!

With that said —if I was Valiant Comics— I would be very proud for the most part of this cinematic effort, having a famous action actor portray their intellectual property in a well put together action feature is a great look for their brand. Now whether or not we make it to a Bloodshot part 2, and Sony or somebody in charge gets the memo on the defining traits of the character, will remain to be seen.

Jamie Madrox is one half of the hip-hop/horror-core rap duo Twiztid. His stage name is an homage to Marvel Comics character Multiple Man. Jamie is not only a talented musician, but a self-proclaimed Super Geek and co-creator of Astronomicon an annual pop culture convention in Sterling Heights, MI. Jamie will be writing pop culture Super Geek reviews at Up Your Geek while under quarantine for your reading pleasure. Check out twiztid.com.

Pulp Goes Pop: The Potential for ‘The Shadow’ in Film
‘A Goofy Movie’ Is a Modern Disney Cult Classic