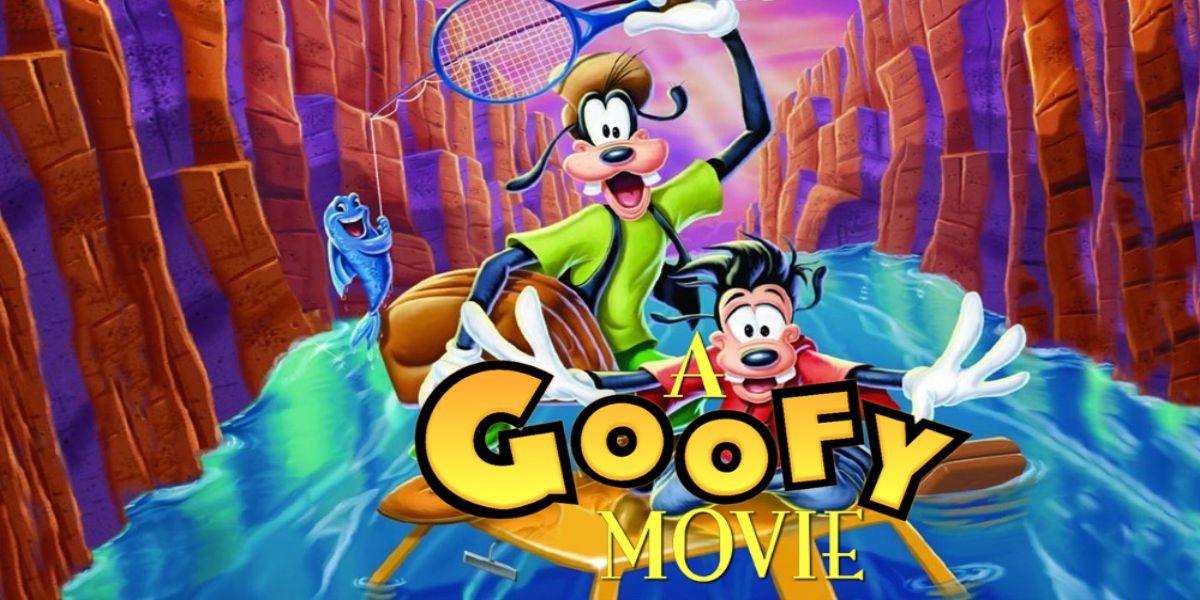 Disney continues to be one of the largest media companies in the World. With a hold on so many licenses, properties, and individual works of art that it is surprising that they have not done more with some of their original characters. There is no full length feature film of Mickey, but there happens to be one of Goofy. Goofy has always been a comedic side character, but in the 90s he was given a son and a show which became popular enough to lead to a feature film continuation. In 1995 A Goofy Movie made its way to theaters and at the time it didn’t quite land. The reviews weren’t the strongest and while the box office numbers were good the film really didn’t catch on until home video. It has been 25 years since that film came out and in a surprising turn of events the film has easily become one of Disney’s most beloved recent cult classics. With the anniversary of the film’s release, what better time is there to evaluate why it is so beloved and how the tide turned on this genuine modern Disney Classic.

A Goofy Movie tells the story of Goofy and his son, Max. Max is a teenager whose favorite musician is a pop singer named Powerline. He has a crush on a classmate named Roxanne while being embarrassed that he could potentially be like his father. After an incident at school that gets Max in trouble, Goofy fears that he is losing touch with his son who could be going down a dark road. This leads Goofy to take Max on a cross country road trip to attempt to reconnect with his son and visit the places he remembers his family taking him, but Max has other plans.

The film is in essence a new take on a continuation of the Goof Troop television series. While many things are changed and the characters are aged up it still does well at linking that show, while not alienating those that are unfamiliar. In this way the story itself feels self-contained and has aged extremely well. It has a timeless quality that continues to impress. What has made it work so well is its attention to giving these characters realistic emotions. They may be cartoon characters, but their hearts feel fairly grounded in a lot of ways. That grounded nature of these characters has led to the film holding a place in the heart of so many people. It is hard not to care for these characters. The story itself is simple, but its simplistic structure allows for the film to take it in directions that other lesser Disney films would be too afraid of doing. It is a confident production whose writing and direction shine because of the dedication to caring about the characters and the details of their world. This care is seen heavily in a lot of its technical merits.

The film was largely produced in France with a French team coordinating with American writers in English, which sounds complicated but inevitably helped to create a beautiful looking film given the limitations of resources that other Disney productions may have had since it was initially envisioned as just a continuation of the television series. It is a smaller scale film, but the animation is extremely solid with some striking moments of character design and backgrounds. The film is also bolstered by an excellent soundtrack with songs that fall in line with more of a typical musical in addition to the now extremely popular Powerline songs that were performed by Tevin Campbell. The voice performances also stand out with Bill Farmer encapsulating his Goofy, which he’s been consistently performing for quite a long time. The film brilliantly gets to show off his ability to portray Goofy with depth and heart, which shines alongside Jason Marsden as Max who brings the angst needed for a character dealing with teenage issues. The rest of the stellar cast bring something to the table as well and indicate that the talent behind this movie were passionate. They all gave it everything and the film is better for having done so, which gives way more credence to the cult following that has turned this film into a sleeper hit for Disney.

Why People Love It

There are often several factors as to why a film can catch on with people or fail. Some of these factors include the time in which it happened to be released alongside the way in which a film is marketed. While a moderate success in theaters the film didn’t really find its fandom until it hit home video. When VHS tapes were circulating the film gathered a following of its own and that following has grown up to not only continue to love the film, but also appreciate it for the intricacies it juggled.

If you ask a fan why they love this film you’d probably get a plethora of answers from the music to the comedy to the animation, but one thing that always sticks and rings true is their appreciation for the humanity in the story. I’ve seen on multiple occasions fans discuss that they came from broken homes or single parents. They know what it’s like to not have the best connection to parents or to have issues with them, but still feel that need for a paternal bond. The film beautifully in the easiest to understand terms reflects that internal familial struggle perfectly. Max is embarrassed with his father, but it is the only family he really has. His struggling adolescence is balanced with a father that does not want to lose the love and the only son he has. It’s a very sweet and loving connection that gets resolved throughout the course of the film, but there are bumps. This sets the story apart from other animated films and it certainly resonated with people and still does. It’s an emotional film that doesn’t shy away from expressing the harshness of love. Recently during Disney’s 25th Anniversary reunion the Director, Kevin Lima explained that making the film was his own personal form of therapy having come from a broken family himself. I think that personal touch really makes the film so cherished on a deep level and should not be ignored when discussing this.

The film also is loved for its stellar music and of course the character of Powerline, who has essentially become an icon in his own right. The two songs he performed have been loved because of how catchy and how great they sound. I have seen Powerline cosplay at multiple conventions with people really taking to him. This love and passion for this character knows no bounds and shows how the film found a way to stand apart from other Disney musicals. The songs still feel like they could have been on the pop charts. Powerline in essence is an example of how that film is simultaneously a part of its era, while being ahead of the curve. It balances the silly aspects with emotional storytelling and incredibly cool musical numbers that feel like a blend of what Disney does at its best, which is why the fans like myself continue to love the film and keep it alive so much so that it is now a cult hit.

It is incredibly difficult to tell in the moment which film is destined to reach cult status. So many films achieve this without even attempting to do so. A lot of the most popular cult films started off by just attempting to make the best films they could under the circumstances they had or despite those circumstances. With Disney being one of the biggest media corporations in the world it’s hard to call their work cult, but incredibly A Goofy Movie has defied the odds and became one that is growing its fan base every year.

Disney obviously had no idea what kind of movie they had on their hands and it is apparent that they didn’t give it that much attention. The film didn’t even really find it’s footing until it was released on VHS and it seems that they underestimated the fans for years.  I’ve noticed that as more people from my generation have gotten older there still is a shared love for it. That love has blended into the rise of the internet culture since the movie’s release. Online communities thrive and people spend so much time doing fan art of all of the characters in addition to sharing their mutual love on the film. It was stated recently that Disney wasn’t fully aware of the love the film had until the 2015 D23 Reunion Panel they hosted. That panel was a massive success and the realization from Disney has led them to consider the film much more than they would have before. I have seen an uptick in merchandise and love thrown its way. The characters are featured on more clothing and have found their way into the theme parks. I can’t imagine that wasn’t due to the love that fans have poured onto this film making it one of Disney’s hidden gems that is quickly becoming not so hidden.

The recent reinvention of Ducktales has even brought into the fold Powerline and the events of A Goofy Movie as a part of their canon, which is a testament to the film making a cultural mark when it comes to Disney. Disney fans are some of the most passionate and devoted fans in the world. They share their love for the characters and films endlessly. A Goofy Movie is no exception to this and because of the film gaining so much traction over the years this cult status symbol is becoming undeniable.

A Goofy Movie is without a doubt a Modern Disney Classic. The film has touched the lives of so many people and have stayed a constant in the hearts of fans who carry on its popularity. The power of fandom can be a dangerous one, but when preserving the memory of a beloved film it can be truly something special to behold and cherish. The film is still being discussed 25 years later and that is truly an incredible feat for any film let alone a Disney film that didn’t have the resources the other Disney productions had at the time. It is a film that I love and with it being the Anniversary there is no better time than to see it if you have yet to give it a chance. You will most certainly not regret doing so.