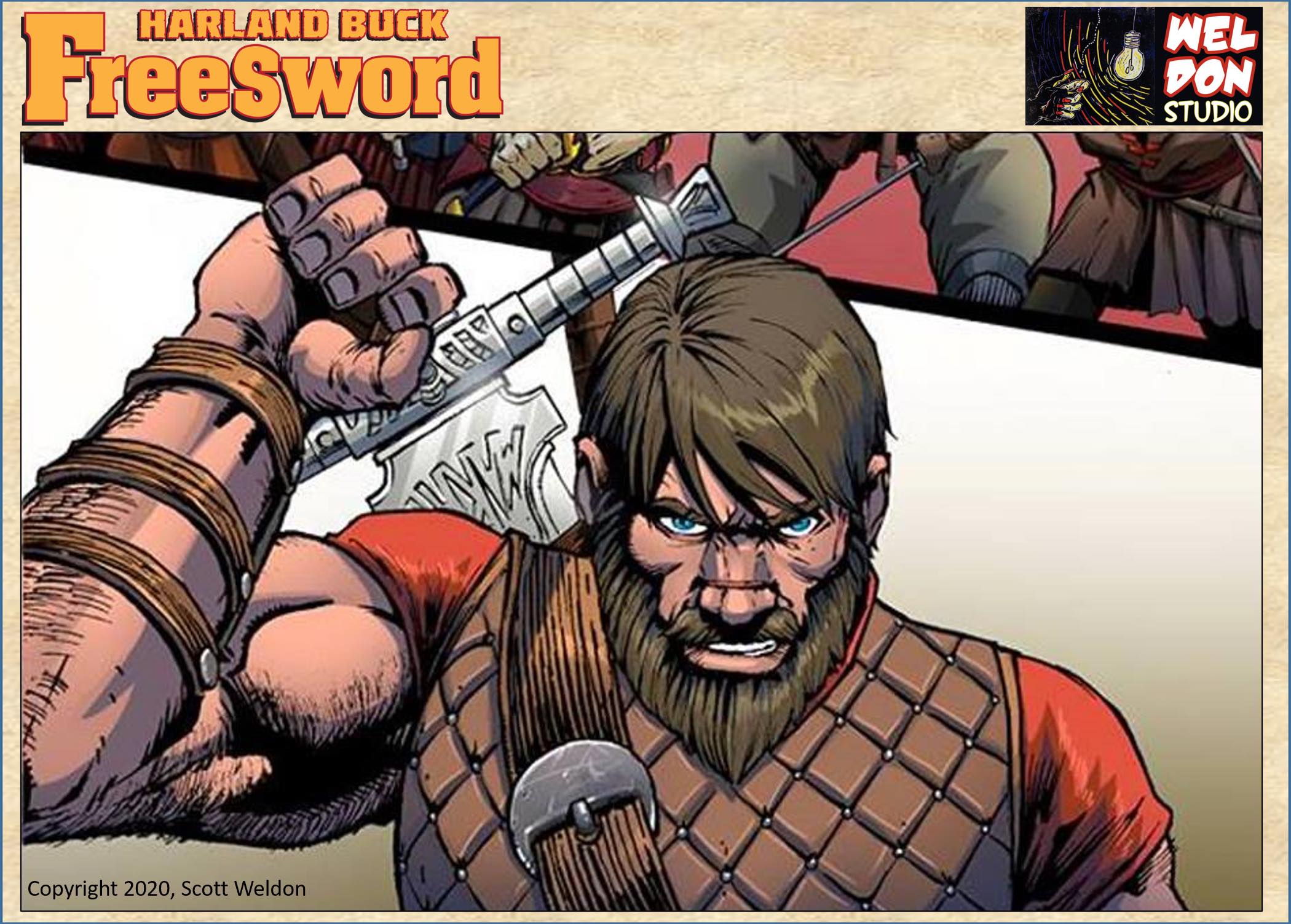 When people think of obstacles in a story about heroes there are many things that come to mind: monsters, goons, evil masterminds, but rarely does one take in account the massive obstacle that is a setting. This is something that makes Harland Buck: Freesword quite uniqe because while it may in fact have the titular hero face all those things, the theme of man vs nature is the most distinctive, and its most alluring trait.

I recently picked up these books because I had heard a lot of buzz around the internet about them. I have always been one for a good fantasy story with a medieval setting, and so I bought the first arc worth of issues. However, what really got me excited to read this book was talking to Scott Weldon himself about this book. I had reached out to him and was fortunate to chat with him. The way he described this series stuck out. He had called the series an “American Fantasy.” He talked about how he wanted this series to despite having a fantasy setting, feel a bit like the American West, but a part that is quite frankly not really touched that often: The hardship of the American Frontier. This was something that resonated with the history nerd in me, and so I waited and after a few days for shipping, my first 5 copies arrived in the mail, and it was well worth the wait.

The first thing I will say about the book is just how much time and love was clearly put into building this concept. At the back of every issue is a 2 to 3 page Encyclopedia on the lore and language of the book. It defines expressions, educate on terms, and lay out the geography of it’s setting. However, there is one thing from this Encyclopedia that needs to be addressed before going any further: What exactly is a Freesword?

Freesword: A mercenary warrior who does not owe fealty to a kingdom, noble house, or organized guild. Literally, a FREE sword.
Freeswords fight for money, and are most often seen serving the one realm or noble houses in battle, guarding merchant caravans, hunting bounties or acting as hired musce for more unscrupulous sorts. It is not uncommon for Freeswords to resort to banditry or extortion when work is scarce, which causes the two of them to have a more nefarious reputation then their guild counterparts. Because of this, some groups will only hire guilded mercs, fearing the shady reputation Freeswords can bring.

Harland Buck is one of these Free Swords. We don’t know all too much about our titular hero, and if I were to compare him to any other character in western story telling, it would be the Man with No Name. He is a gruff man of action who speaks very little, but has much in the ways of thoughts. He is constantly analyzing his surroundings, and for as a protagonist for this epic tale, he is perfect. I have always enjoyed when writers mix genres and seeing a spaghetti western style story set in a medieval fantasy is something that really just rubs me the right way.

Issues 1-5 don’t really have too much of a continuity and honestly, it’s best that way. Each issue serves as their own individual story (with exception to the first 2 issues which complete a story of their own). While reading it you will notice a lot of love notes to the western genre and when you see those things paired with the medieval flare, it makes you wonder why it would take so long for more people to be doing it. However, the crown jewel of this first arc is without a doubt its 5th issue: Bad Business.

What Weldon accomplishes in Bad Business is something very rare: a perfect singular issue of a comic. The 5th issue of this book does everything it sets out to do in a perfect way to the point where it is literally flawless. The art is fantastic, it has this contained narrative that is compelling and showcases the human element to Harland’s character, the emotional moments hit with just the right intensity. Harland Buck: Freesword was already a book that earned my commitment as a reader, but issue 5 was the moment I became a dedicated fan.

Harland Buck: Free Sword is probably one of the best fantasy comics on the market. Its mixture of medieval fantasy with the tone of classic westerns is a perfect formula that translates really well to the page. There are currently 7 issues of Harland Buck: Free Sword available for purchase with an 8th coming on the way. You can purchase the books on the Weldon Studios Website, support Indie creators and Indie Book so we can get more books like Harland Buck.