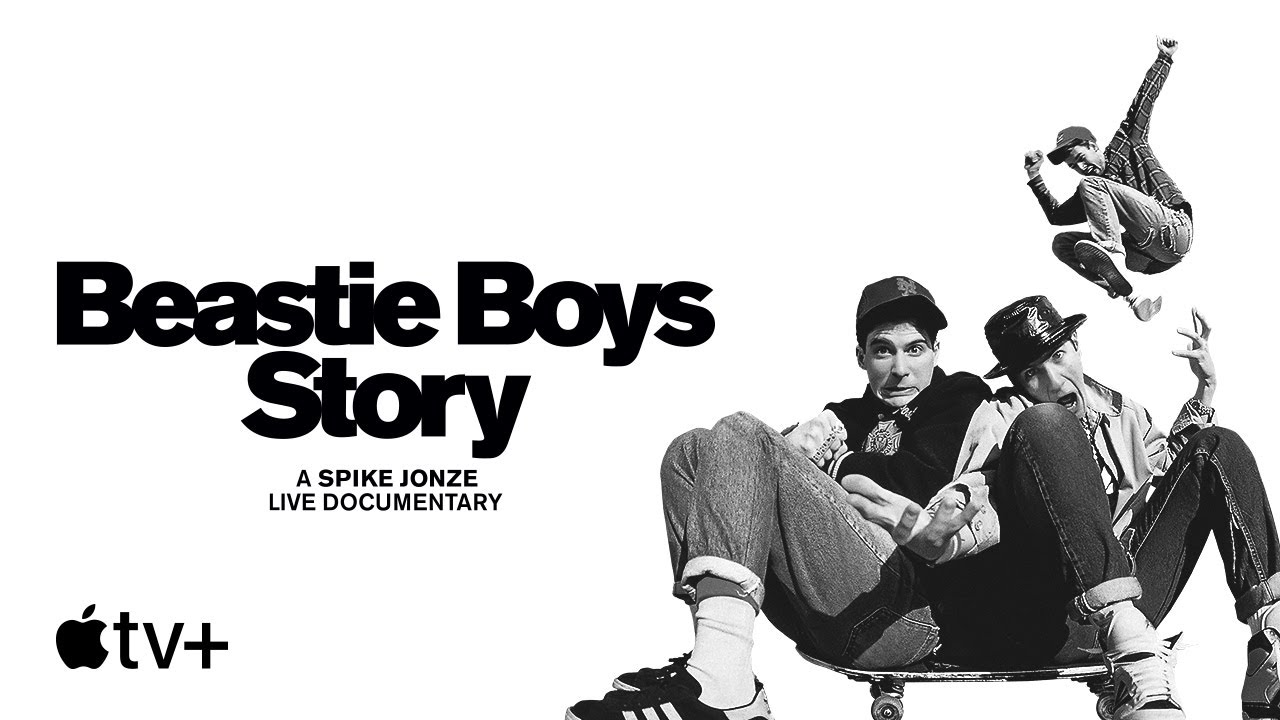 It is more than fair to say that there are certain artists and types of music that happens to fall into your lap at the right age. This includes whether it was introduced to you or you just found it on your own you always remember the way the music moves you and the way it resonates with you. I remember when I was first hearing the Beastie Boys and how their music had such a distinct feel. It helped me bridge the gap into falling in love with Rap and Hip-Hop. It has been 34 years since they dropped their first official studio album, Licensed to Ill and just recently they released their latest documentary, Beastie Boys Story. It was a documentary I knew had the potential to be great and have been looking forward to. What we got was nothing short of excellent. Here is our review of the feature length documentary, Beastie Boys Story.

It is surprising to think that there really hasn’t been any feature length documentary films following the life and career of the Beastie Boys. They were certainly an influential group that continued making fascinating music well into the 2000s. Even if it hadn’t happened before, this is a great example of how to use the personal stories to exemplify the material and make it a fascinating experience the whole way through.

The film documents the live stage production put on by Michael Diamond and Adam Horovitz as they tell their life story to a crowd of fans. Their stage presence is accompanied by their own personal stories ranging from tragic to hilarious in addition to presenting plenty of archival video footage, samples of their music, and even sometimes props that are brought out on stage. It all comes together to effectively give an accurate retelling of their version of events, while being highly entertaining. They tell of the ways in which they met and came together musically. They talk about the friends they made and lost over the years. They also talk about how they have to constantly reevaluate who they are as people and how they matured not only in what music they produced, but also personally. They even brought up some very moving and personal moments that were quite emotional. I don’t want to remove any of their stories because the way in which they are told are quite well thought out and very introspective.

It’s a film filled with so much depth about who they are as people and this is something often missing in the documentaries that aren’t told from the artists’ perspective. This film uses their stories as the basis for the entirety of its runtime and they alone carry the weight of everything told. It’s a dense nearly 2 hour event that still moves very quickly. While I would have liked for the film to have covered every album they made, it still gives more than enough information about them that anything that is missing does not feel like a disappointment. It’s filled to the brim with great content. It’s a must see for those fans that may have missed this live event they had and want to experience an excellent film along the way.

One of the most challenging aspects to any documentary is finding the heart of the story and compiling all of the clips and interviews together to create a captivating experience. Often times this strategy is successful, but this film is different. It isn’t your typical documentary in that it is just a filmed live stage production. It is seemingly devoid of complicated edits to most people, but that is exactly why I think that this may be one of the most technically capable film of its kind.

It is incredibly challenging to orchestrate anything live. There is an incredible amount of pressure to get everything right from the lighting to the timing and the delivery. Even when you are reading off a teleprompter anything could go wrong and things did go wrong. The documentary intentionally leaves in little moments of errors to keep it as honest as possible and that works to its benefit. The way in which any moment of awkward pauses or dull moments is completely cut out of the film is impeccable. There is an art to taking a production like this and making it palpable from a film viewing experience and this is one of the best I’ve seen. The video footage is seamlessly integrated and edited well so that their stories are overlaid with what we are shown. It gives a broader context to the scope of the storytelling from Mike and Adam.  When we are shown them on the stage it is for a purpose and same with the archival footage. Everything compliments one another and it must have been an interesting challenge to accomplish in the editing room.

Beastie Boys Story was directed by talented filmmaker and Beastie Boy collaborator, Spike Jonze. He has a great streak of extremely well put together productions and this film is no exception. If it were entrusted into the hands of a less competent filmmaker I do not believe the film would work nearly as well as it does. He has so much experience in directing live shows as well as feature films and he proves himself in this. It’s certainly what is keeping him a reliable individual to go to especially when they set out to do a documentary in this way. It is benefitted greatly by the talent behind the scenes and works as a great example on how to make an engaging documentary from a live performance. It’s impressive.

When discussing the lives of musicians it is very easy for those people to stay relatively the same for their entire lives. There are so many celebrities that don’t have moments of personal growth and when they do they try their best to ignore the past in a lot of ways. Even when there is tragedy they often try to move past, but I think what makes this documentary special is just how thematically real and honest it is.

This documentary feels like a series of personal conversations even if it is obviously rehearsed and staged. The genuine emotions from telling these personal stories is inherently palpable. The friendship that these two have is just as apparent and with age they have had time to reflect upon their past. Even the mistakes they made. They own up to the changes they made during the early part of their success. They became partiers and didn’t like the lives they were leading, which is what forced them to be better. They regret some of the misogynistic lyrics present in their work and have taken it upon themselves to own up to that, which is rather hard to do especially when there will always be people who tell them they should never have changed. This all indicates an increased awareness of maturity. Learning from your mistakes, admitting to them, and moving forward to become a better person is what we all try to do at some point. I don’t think many people get joy from not being the best that we can be. Even with all of this desire to do better it is extremely difficult to do so. The theme of their discussion resonates with those of us that have felt similarly even when having to deal with tragedy.

While it is not the most heavily discussed point in the film it even brings up the passing of third Beastie Boy, Adam Yauch in 2012. It is apparent that he had a large impact on them as a group, which is why they don’t perform or make new music anymore. Losing those that you care about is incredibly rough. I’ve been there and it is always moving to hear about others who have experienced that same pain even if it happens to be a different way of feeling it. This film benefits from being truthful with the emotions. That gives it so much more depth and helps to ground their lives in a relatable sensibility. The themes of regret, loss, and redemption play heavily into their stories and those themes are why it is such a great documentary experience.

While it may have taken quite some time before a Documentary like this was produced it was worth the wait. This is one of the best films about the lives of a musical act I’ve ever seen. As a fan of not only their music, but their creative and philanthropic endeavors this film works exceptionally. It is a great introduction for those who may not know as much about them, but it also is a must see for life long diehard fans. I highly recommend checking it out on Apple Plus if you want a well-made documentary about an influential Rap group.

Struggle of the Frontier With a Broadsword: Review of ‘Harland Buck: Freesword’
‘Justice League Dark: Apokolips War’ Ending the Animated Universe With a Whimper Instead of a Bang