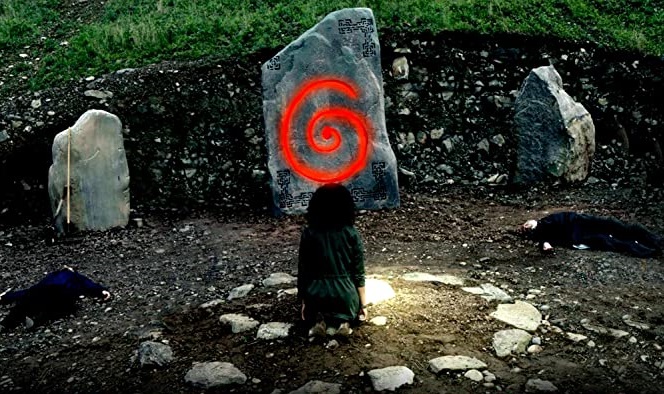 A Deadly Legend is the feature-length debut for Writer Eric Wolf and Director Pamela Moriarty, and tells the story of an evil awakening that takes place over the weekend at a highly sought-after real estate property following the announcement of construction almost fifty-years after an event that saw the same evil kill an entire family, leaving a group of family and friends to discover a darker secret that goes back centuries further. Despite how interesting that plot may be, unfortunately the film does not show through in its premise until the interest in the viewer has mostly dissolved. I do not take pleasure in heavily criticizing film, especially those that are one’s debut; however the biggest issue is that A Deadly Legend feels rather incomplete.

After real estate financier and developer, Joan Huntar (Kristen Anne Ferraro) purchases a property on a summer lake area; she decides to take the weekend to the property with friends and partners while the construction is underway. When contractor Mike Renfield (Eric Wolf) and his assistant Wanda Pearson (Lori Petty) accidently break through into a sacred ritual area, an evil of two powers is unleased and the powers that be begin their possession of those around. With stars Corbin Bernsen, Judd Hirsch, and Petty highlighting the cast, it is easy to be fooled by the supposed 90’s centric cast and plot, but I would be remise if I had said seeing Hirsch onscreen again was not enjoyable.

The biggest issue with A Deadly Legend is its lack of technical film knowledge; I am not joking when I say I lost count of how many fade transitions there are between scenes. As the movie went along I realized it was due to a lack of establishing shots, causing a frustratingly difficult display of poor editing. Almost every scene, and even cuts during scenes, is initiated with a fade-to-black. Another technical issue was the usage of cropping and framing, as there is little to no consistency in regards to stability and the framing of angles, even the aspect ratio seemed to struggle at times. Replacing many of the fades with establishing shots, cutting the frame down to 2.35, and possibly applying a slight color correction would do wonders for A Deadly Legend.

It is a shame, as there slowly began to be an illustration of mythos entering the third act. The idea that there are essentially two evils, mankind slightly making a third, is an enticing idea to promote in a horror film and I would enjoy seeing a thorough execution. However, it feels as though the film did not know what it wanted to be until the Producers had access to a property to film on. Mike is arguably the film’s most interesting character as he switches from control to possession, and also owns a few good lines such as “Have a beer” and a surprisingly funny gag about the dirt on his clothing, but that is the furthest extent of characterizations in this film.

A Deadly Legend is, above all else, a film that was attempted, and that is still something to be admired. There was a story to tell and Eric Wolf and Pamela Moriarty did the best with the material they created. Moriarty has an accomplished career as an Assistant Director and a Second-Unit Director, and there is interest to see what she will work on in the future. There is definitely an interest watching this movie with friends at a party.

Excuse Me Miss, Your Ignorance is Showing: Response to the TIME Article About Superheroes
HBO Max Greenlights Animated Series ‘Young Love’ based on the Oscar®-winning short film ‘Hair Love’ from creator Matthew A. Cherry and Sony Pictures Animation