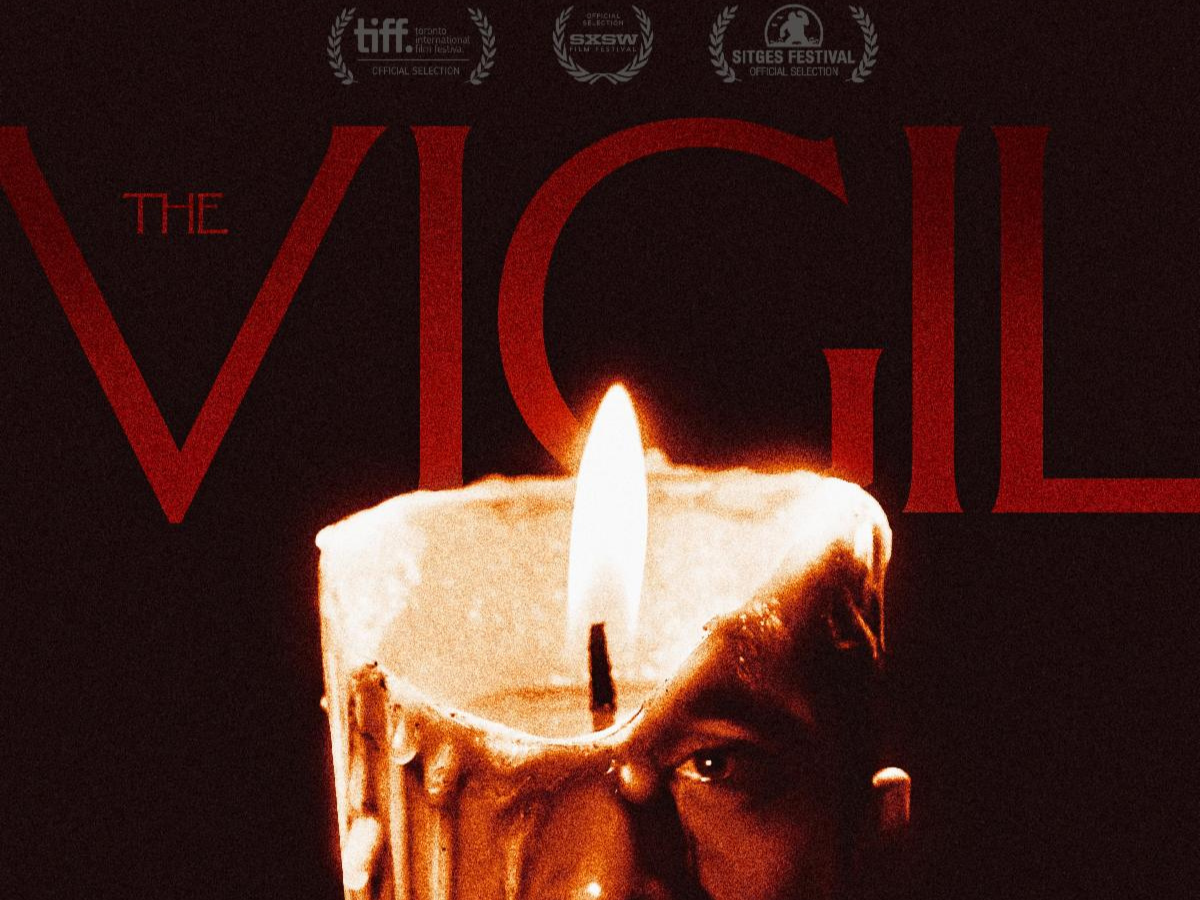 The effective utilization and highlighting of a limited setting are one of the most crucial parts of indie horror films; the ability to trick the audience and make them feel as if they stuck in a larger world inside of a smaller scale. In the case of the feature debut for Writer and Director Keith Thomas’ The Vigil, there are fewer examples in recent years that can actively compel a viewer for over ninety minutes when the majority of such uses one main room and a hallway. For ninety minutes, there is a lot to unpack in this excellent display of indie horror.

The Vigil follows Jakov Ronen (Dave Davis), a former member of his community’s Synagogue, trying to make his way outside of the belief via a support group when he is confronted by one of the members of the Orthodox he had recently departed from. This member, Reb Shulem (Menashe Lustig), informs Jakov that they are in desperate need of a Shoman to oversee a community member during the night that had recently passed and that the previous person they had for the job suspiciously left before commencing. Hesitant at first Jakov attempts to avoid the situation, however, Reb Shulem prays on the young man’s inability to finance his rent for his medication and convinces him to stay for a price. In a few short minutes, the entire characterization of Jakov Ronen is on display as a very insecure and often timid person, that has clearly suffered a devastating event that has led him to leave his beliefs. His characterization is further elaborated-on as the film progresses, but the opening alone gets you on his side and his perspective rather quickly. Once he meets the mistress of the house, Mrs. Litvak (Lynn Cohen), and positions himself in front of the recently deceased body of Mr. Litvak, the film enters a creepy aura that haunts both Ronen and the audience right up until the final shot. Jakov slowly begins to feel the presence of something sinister or demonic, however, due to his medication, is unable to dissonate the difference between reality and reaction, offering up a unique blend of scares and twists.

Keith Thomas and Director of Photography, Zach Kuperstein, do an immaculate job of encapsulating the emotional, and spiritual journey of Jakov’s character. From low-angle, and often lingering shots that expertly craft tension, to fast-paced edits that directly avoid any unnecessary jump-scares (only counting two by my recollection), each shot is a direct reflection of Jakov’s state-of-mind, and it as an effective tool for both delivering on the horrific atmosphere and the arc of Jakov’s characterization. Thomas’ writing is also tight and cohesive, even establishing a very clear set of rules for the perceived demonic presences that the film capably handles during the third act. There were very few times I had to question the logic of Jakov Ronen and that is testament to the believability of Thomas’ writing and Davis’ performance. This ideology of mistaking hallucinations for a demon, and using this to further explore Jokov Ronen’s beliefs is brilliant and is challenged throughout the entire runtime. There are a few that may compare a certain scene to that seen in films such as It Follows (2014), but I feel this would be an unfair criticism.

I have to give special credit to the use of certain practical effects, many of which have been seen in decades past such as A Nightmare On Elm Street (1984), however, there is such a charm to these scenes that even when something may look fake or “cheap”, you’re willing to suspend that disbelief in favor of the story being told. Two scenes, in particular, one involving a character’s movement and another involving a hallway with humanoid walls, were so well-shot I could not help but have a smile on my face whilst watching them.

The Vigil is an absolutely astonishing feature debut for Keith Thomas. Without overbearing the audience with tradition and lore, he allows the events to flow naturally as if this was just an average Shomen service, and it creates such a far more interesting story. I find myself actually interested in the finality of the story to the point of researching the belief system further, to get a greater understanding of how this film would feel to an individual versed in the subject matter. That alone is praise I could give to very few indie films such as The Vigil, where I’m actually further invested in this world that s creative, yet unapologetically grounded. The intense atmosphere, tragic characterizations, and terrifying lore give The Vigil a step above other indie horrors of recent memory, and one that should stick Keith Thomas out from the rest of the crowd.

The Vigil is in currently in theaters and VOD.