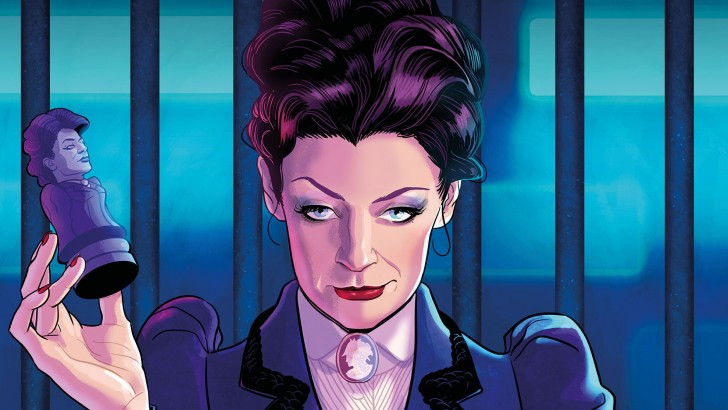 The story and history of Doctor Who cannot simply be described, from the alternativity of history to the epic adventures of space and time travel, the show, and more so, have encapsulated audiences for nearly six decades. Viewers and fans of the show have had the pleasure of being introduced to many different characters and creatures, but one that has consistently made those who watch is non-other than the character of The Master.

The Master is the ying to The Doctor’s yang, a Time Lord from the planet Gallifrey that is hellbent on following The Doctor and their companions around space and time with the hopes of, not necessarily destroying, but making their lives much more difficult. The Master is now celebrating their 50th year since originally being introduced in 1971 by Roger Delgado in Terror Of The Autons, and in commemoration of this incredible event, the team from Titan Comics have moved forward with a special comic book run featuring one of The Master’s favorite incarnations known as “Missy”.

Missy is the eighth incarnation of the Master, following John Simm, and was eloquently portrayed by Michelle Gomez, and was the main adversary to the Twelfth Doctor played by Peter Capaldi. The comic, Doctor Who: Missy, is expected to release on April 14th, 2021, and is written by Jody Hauser (Star Wars: Rogue One), and is expected to include appearances by the Third and Twelfth Doctors as a culmination for the characters bi-centennial celebration. This, in correlation with The Missy Chronicles from 2018, will certainly be an excellent piece for any fan of The Master.

During a panel dedicated to exploring The Master’s comic book release, and the history over the course of fifty years, Jody was joined alongside Andrew Sumner (Forbidden Planet TV), Colorist Enrica Eren Angiolini (Shades of Magic), and Editor Jake Devine (Horizon Zero Dawn) to share their experiences working on the comic book as well as their memories from the character. Jody Hauser went into detail as to how she captured Michelle Gomez’s whimsical and enigmatic attitude, stating that she would “go back and watch some of her best moments from the show” before starting each day of writing for Missy, enforcing a greater sense of authenticity. Enrica Eren Angiolini has done an incredible job designing many of the covers and panels for the Doctor Who comics over the years and having her inclusion makes this story all the more exciting. With Jake Devine coming on as the editor of this story, it is really interesting considering he has such a dynamic range in history and seemingly allowing both Jody Hauser and Enrica Eren Angiolini to have as much creative control as possible.

Without spoiling too much from either the comic or the show for that matter, the panel was able to delve into an excellent Q and A session, including briefly discussing their favorite incarnations, Jake choosing John Simm, Jody picking Jonathan Price’s (albeit jokingly) but also siding with Erin in favoriting Roger Delgado, and Andrew loving Anthony Ainley (as he developed a personal relationship with his Mother) as well as Derrick Jacoby. They also briefly discussed how the show may, or may not, be affected due to the stories in the comics, and what they are looking forward to in the next season. This team seems extremely excited to work on Missy, and also has an incredibly diverse knowledge of the character that Whovians will be excited to read.