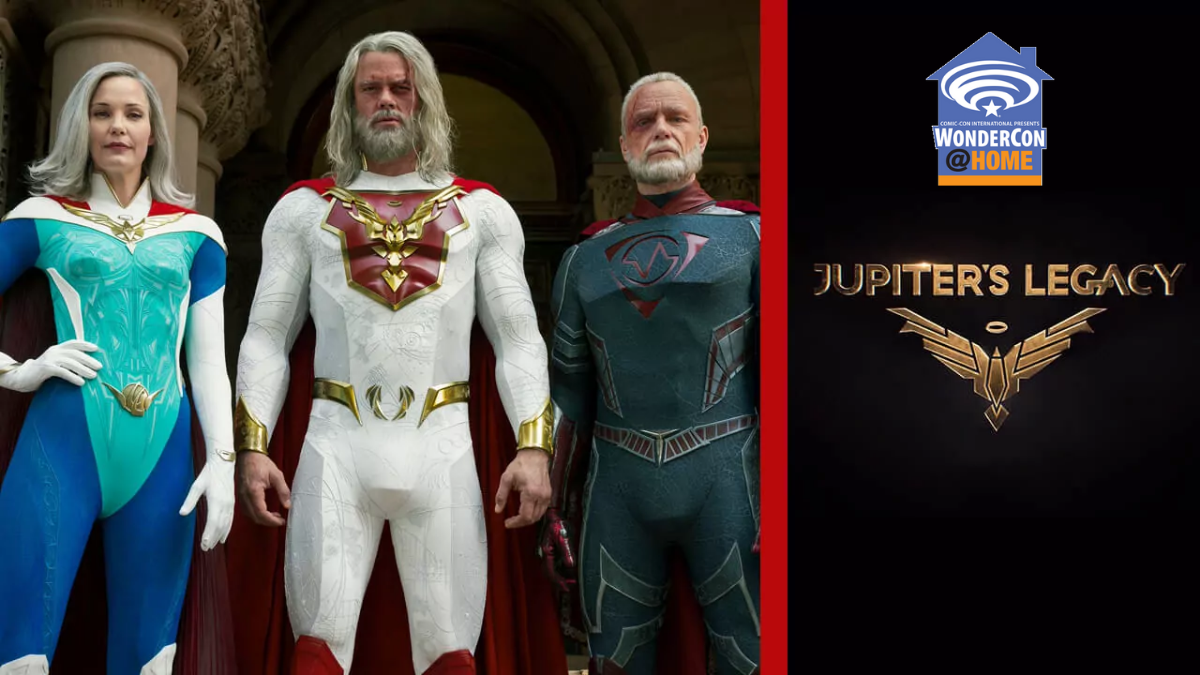 Mark Millar has easily become one of the greatest comic book writers and creators in recent memory, with titles such as Civil War, Wolverine: Old Man Logan, Kick-Ass, Wanted, and Kingsman, and under all of those incredible titles, the one of which he has been looking forward to adapting the most as an Executive Producer is Jupiter’s Legacy.

Along with many of the cast of the new show, which debuts on Netflix on May 7th, Millar hosted a panel for WonderCon 2021 in preparation for its upcoming release. Josh Duhamel (Transformers, Safe Haven) describes the story of Jupiter’s Legacy as “a family drama, coinciding with a group of dysfunctional superheroes that become who they are over the course of one-hundred years”, he then further elaborates that it is “a different look at this genre, different than I had seen before.”. Co-Star Leslie Bibb (Talledega Nights: The Ballad Of Ricky Bobby, Zookeeper) played this a little further by hinting at the dynamics these characters feel over the course of a century, and how these characters go from a sense of “hopefulness” to something else entirely, making for one of the most exciting narratives to be showcased in comparison to the story’s that audiences may already be used to. Duhamel states “What superhero story do you see where you see one go to therapy?” is arguably the best, understanding, and most descriptive lines from the entire panel.

Matt Lanter (Vampires Suck, Star-Crossed) expressed his excitement in the role describing the characters and story as “journeys on top of journeys, the lifelong journey, but also the journey of Sheldon (example) going from sane to insane”. These are characters that do not follow a moral code necessarily, nor do they feel an obligation to follow a good or bad side. This is something we see particularly in graphic novels, but maybe not with the timeliness that Millar has done with Jupiter’s Legacy.

The cast for Jupiter’s Legacy is incredibly dynamic and just based on the panel alone, has unbelievable chemistry, especially with Bibb sharing much of the excitement with each individual actor. This is arguably one of the most excitable panels from WonderCon 2021, and without giving away too much from the plot, the cast was able to present a sense of excitability for the audience to feel engaged. They even went to the extent of bragging about their characters and who had the best role and time playing their respective roles in the show. Millar then proceeded to move forward with the second-generation of characters from the show. Elena Kampouris (Men, Women, And Children, My Big Fat Greek Wedding 2), Andrew Horton (It Came From The Dessert, How To Talk To Girls At Parties), and Ian Quinlan (City Hall, The Long Road Home) round-out the remainder of the panel as they too express their excitement within the roles they play. You this excitement with Kampouris, as she decribes bringing a level of “unpredictability” to her character and how her inability to be part of the superhero game forces her down a darker path and develops certain layers that will lead her main arc within the series.

The mutual respect for each other, and particularly for Mark Millar himself, is what will make Jupiter’s Legacy one of the biggest shows to look forward to in 2021. Based on the original story from 2013 by Mark Millar and Frank Quitely, Jupiter’s Legacy follows a family of superheroes and how they have changed in their roles over the course of one-hundred years, Mark Millar describes this as the project he has “look forward to making the most”, and considering his resume, that says a lot.