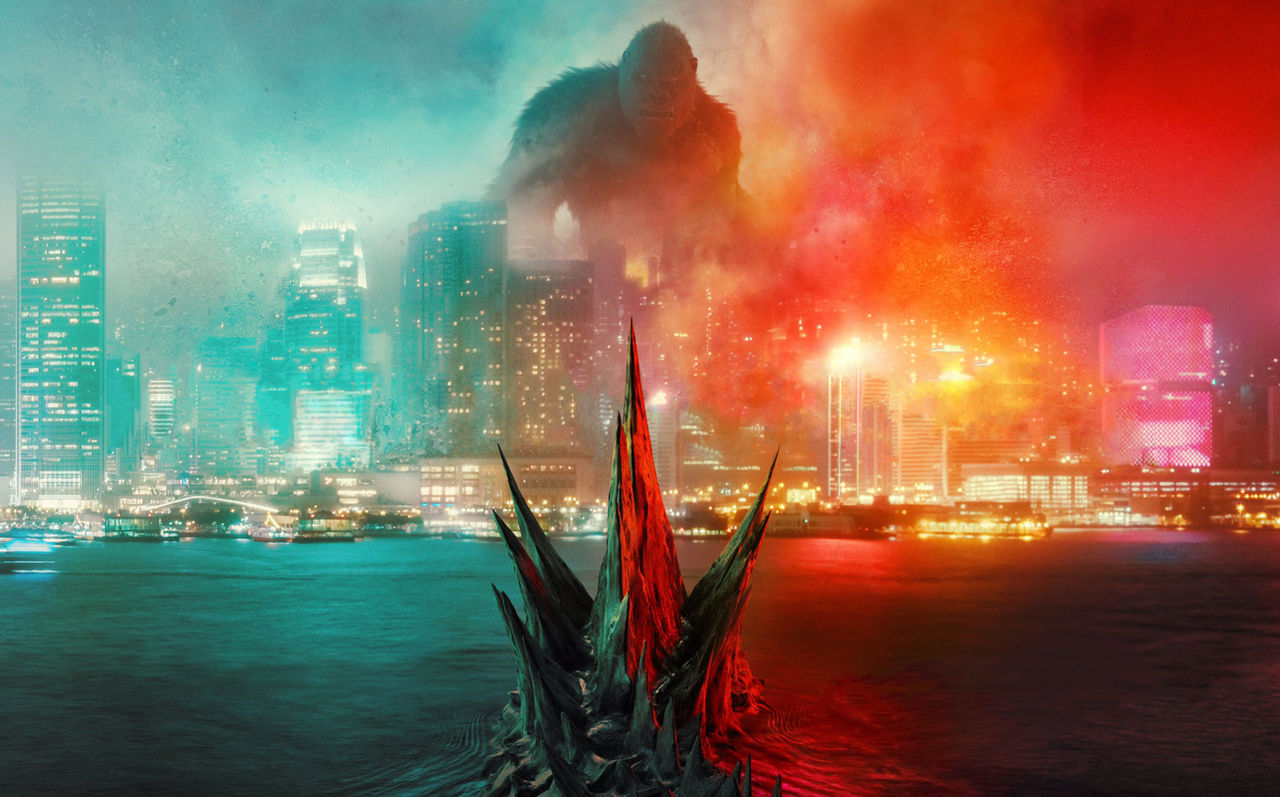 Since the early 1940’s there have been many, many instances of franchise rivalries, from the early-days of Universal monster’s, which inducted the first franchise rivalries with such classics as Frankenstein Meets The Wolf Man (1943) and House Of Dracula (1945), to the lavish experimentals such as Who Framed Roger Rabbit! (1988), and ofcourse the 2000’s mashups of Freddy vs. Jason (2003) and AVP: Alien vs. Predator (2004). While a few of these are viewed moreas crossovers than rivalries, one has always maintained its status in pop-culture discussion amongst not just monster or science fiction fans, but the general audience as a whole, being the debate between Godzilla and King Kong. Through countless parodies, commercials, and iconography, and despite having only one previous installment with the two in 1962 by Toho Ltd. (King Kong vs. Godzilla), there was a sense of parity between the two collosal franchises, a comical ideology of East V.S. West if you will, and that original saw the King of Skull Island maintain the title of the best for nearly sixty years. With 2021’s Godzilla V.S. Kong finally being released this Wednesday, we get to see a rematch six decades in the making. Regardless of faults, when this movie gets to where audiences want it to be, it becomes a monstrous masterpiece.

Directed by Adam Wingard (The Guest, Death Note (2017)), and Written by Terry Rossio, Michael Dougherty, Eric Pearson, Max Borenstein, and Zach Shields Godzilla V.S. Kong takes place relatively soon after the finale in 2019’s Godzilla: King Of The Monsters, the world is now feeling contempt with the idea of having a titan and protector, in Godzilla, roam rather freely. However, this patience is quickly tested by The King Of The Monsters, and soon humanity finds itself clamoring at the feet of the beast they once viewed as a saviour. At this time a group of biologists and military faculty are having difficulty deciding how they can approach different containment methods with Kong, who still maintains his position on Skull Island, before an opportunity to explore a revolutionary new power source, and possible home for Kong, quickly arises, offering a chance for salvation for all mankind.

There are many surprises that will sure to make fans gush over the glory of seeing these two monster Legend’s clash; a twist on a classic sequence from the original, and an over-the-top plot certain give the Showa Era a nod. The finale of the film is up for debate, but was incredibly enjoyable, if not a little reminiscent of other blockbuster movies. That being said, there is a lot to be said about how the emotions of each creature drives the narrative, in the a similar way to how King Ghidorah was utilized in the series prior film. Both the titular characters are utilized to the maximum, with Godzilla’s power and sense of threat, which really has not been demonstrated since Godzilla (2014), and Kong’s intelligence being creatively showcased throughout each of their scenes. The Tasman Sea sequence being arguably one of the most exhilarating moments in recent monster movie memory.

As stated, there are faults in this film, particularly in respect to the pacing and the execution of certain characters. It does feel as though there were portions of the film chopped throughout, and considering this is the lowest runtime of the Legendary Monsterverse so far (clocking in around one hour and fifty five minutes), this unfortunately comes across as business decision as opposed to a creative one. That is not too say a film such as this cannot be fast-paced, Godzilla: King Of The Monsters absolutely perfected it, it just gives the impression that certain scenes are rushed, and as a result, feel empty.

While there are returning characters, such as Kyle Chandler and Millie Bobby Brown’s Mark and Maddison Russel, they feel far underutilized in comparison to their previous efforts, which also does not say much. There were two particular standouts, Brian Tyree Henry’s Bernie Hayes contributes alot to the charm and “kookiness” of the premise, while Kaylee Hottle gives the film so much heart it would be difficult not to smile everytime she is on-screen. Alexander Skarsgard, Rebecca Hall, Eiza Gonzalez, and Julian Dennison all provide serviceable roles, and surprisingly are not left feeling as empty upon a first viewing as one would expect.

Godzilla V.S. Kong may underwhelm due to its difficulty with pacing, but the action sequences themselves are worth the price of admission (premier access) alone. There is an incredibly impressive amount of vibrancy from Cinematographer Ben Seresin Unstoppable (2010), World War Z (2013), and each scene with the Titans feels unique, which compared to previous Monsterverse films, is a rather refreshing experience. Godzilla V.S. Kong has some of the greatest Kaiju fights ever put to film, and despite it’s rather rushed runtime, still manages to deliver heart and provide meaning to Godzilla and Kong’s purposes. This is the film fans wanted to see, and Adam Wingard delivers!

Opinion: Things I Absolutely Want To See in A Zack Snyder Justice League Sequel & Everything I Don’t
‘Captain America 4’ In The Works With ‘Falcon And The Winter Soldier’ EP Malcolm Spellman