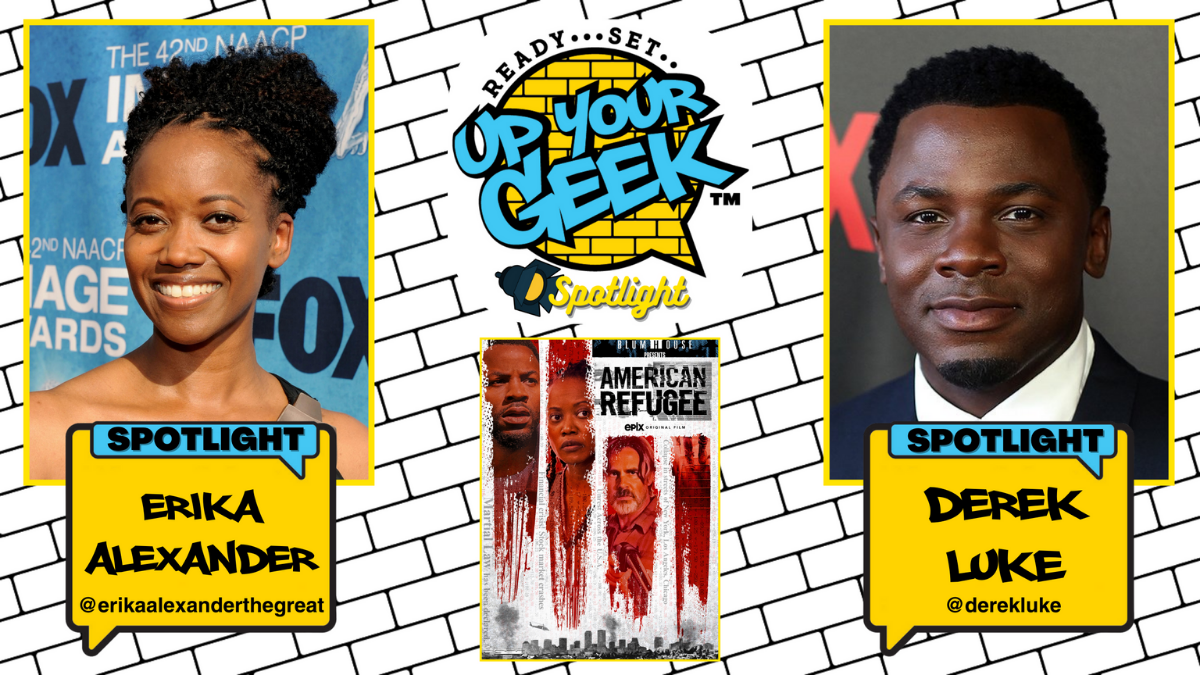 Erika Alexander and Derek Luke shine in ‘American Refugee’ as broken couple Helen and Greg Taylor, who have three children, a struggling marriage and now the world collapsing around them. Society is in chaos outside the walls of the Taylor’s home, while inside they’re feeling the pressure of what seems to be flailing relationship.

In American Refugee, Mr. and Mrs. Taylors are attempting to mend their marital woes at the worst possible time as society is falling apart. Helen (Alexander), a doctor, is a strong will person who demands the respect of her husband, Greg (Luke), who has been faltering within their marriage and having his own shortcomings and self-doubt as husband. They have three young children, an infant, teenager Zoe (Zamani Wilder) and young Kai (Peyton Jackson).

Hellen travels out to the local pharmacy where she encounters a pregnant woman out of sorts and lend her some pregnancy advice. We later find that the woman is eerie neighbor Winter’s (Sam Trammell) wife Amber (Jessi Case). Back home, Helen is summoned by Winter when his son Matty (Vince Mattis) arrives at their home demanding that Helen come with him to their bunker to help. Matty demands Helen comes alone and Greg is not thrilled at the situation and refuses to allow Helen to travel alone. Winter is unhappy once he sees Greg has arrived with Helen, and two share incredible tensions as Winter doesn’t mince words able how he feels about Greg. The Taylor’s leave after the force invitation was over, leaving both Greg and Winter unhappy about the whole encounter.

Later on, while helping his son Kai, Greg notices an electrified fence around the edge of their property that was put up be their survivalist neighbor Winter. Helen demands that Greg talk to the neighbor about the fence. Contemplating the idea, Greg ventures into the city with sister-in-law Brooke (Charity Jordan), to help her pick up Items to bring back to the Taylor’s as they ride out the calamity. While at Brooke’s home, Greg gets a first hand look at the chaos happening in the city and is thrust into a dangerous situation that has dire consequences.

After returning home, Greg is in shock at what has just occurred while he was out and informed Helen and the children how dangerous it is. Later that evening, while the Taylor’s sleep, Greg awake to noise coming from with in the home. As he sneaks around the home, he discovered looters are pillaging his home. Greg get the jump on one of the assailants, as he ushers his family out of the home for a daring escape. Having slept outside, the Taylor’s regroup in the morning and grab belonging to leave their home. The Taylors then move on to reluctantly seek shelter at their neighbor Winter’s bunker, who doesn’t take kindly to the Taylor’s showing up at his home unannounced. First refusing them, he later begrudgingly allows them into the bunker where he lays down ground rules. However, with supplies now dwindling at a faster rate and tensions rising, Winter’s harsh survivalist nature causes the Taylor family to question whether or not they’re actually safe inside rather than outside.

American Refugee is out now on Digital and on EPIX.

I had the pleasure of speaking with stars Erika Alexander and Derek Luke in a fun and very candid interview as they discusses their roles and characters in American Refugee. Check out the full interview below: