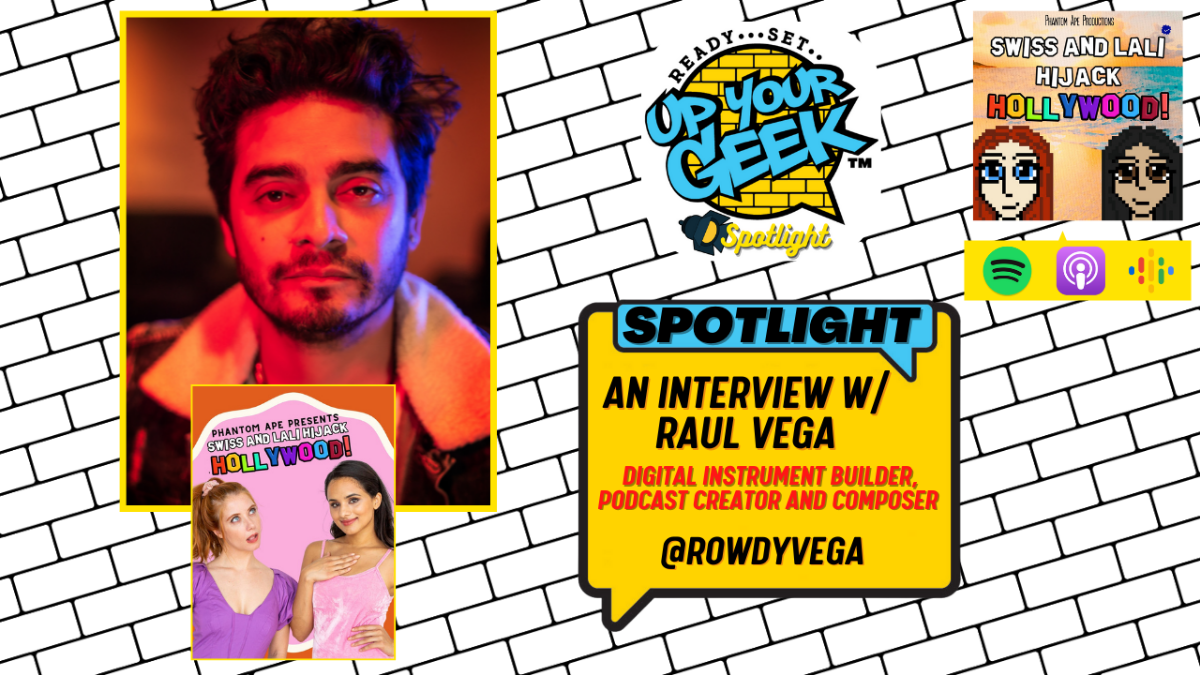 Up Your Geek Spotlights digital instrument builder, podcast creator and composer Raul Vega, the creative mind behind ‘Swiss and Lali Hijack Hollywood,’ a fictional comedy podcast that follows two LA Slackers and lovable troublemakers who decide to “take over” Hollywood by inadvertently become con-artist in an attempt to give up “the hustle” and so they can retire in their Malibu Dream House. Utilizing multi-media platforms that span across audio, animation, and live-action video, Swiss and Lali creates a colorful world of dysfunction, shenanigans, bamboozling, and most importantly, friendship.

Vega’s first-ever podcast, Rose Drive, was featured in Forbes magazine twice after only one season and pitched for a TV adaptation, with director Wes Ball and writer Amber Benson on board for the project. ‘Swiss and Lali Hijack Hollywood‘ was a project created during the pandemic that saw actresses Kristen Couture (Killer Whales, Girly Tales) and Aparna Brielle (A.P. Bio, Jay and Silent Bob Reboot), not only take on the roles of the title characters, but also act as producers on the podcast under Vega’s Phantom Ape Productions.

For the past decade, Vega has been working as digital instrument builder and collaborator with legendary composer Hans Zimmer by crafting the musical instruments utilized to create the scores for films such as Blade Runner 2049, Dune, No Time to Die, Interstellar, Man of Steel, Wonder Woman 1984, Disney’s The Lion King (2019), Dunkirk, to name a few. When he’s not making instruments for films, he loves creating scripted audio fiction podcasts.

Vega talks with Up Your Geek’s Lou Lamar Booker about his experience working on the podcast; getting special guest stars such as Patton Oswalt to voice a character, and how the pandemic fostered creative ideas behind Swiss and Lali. Vega also dives into his love for creating, music, and what lead to his work with Hans Zimmer. Full interview below.

Swiss and Lali Hijack Hollywood is available on Apple Podcasts, Google Podcasts, Spotify. You can also visit swissandlali.com for the latest updates.