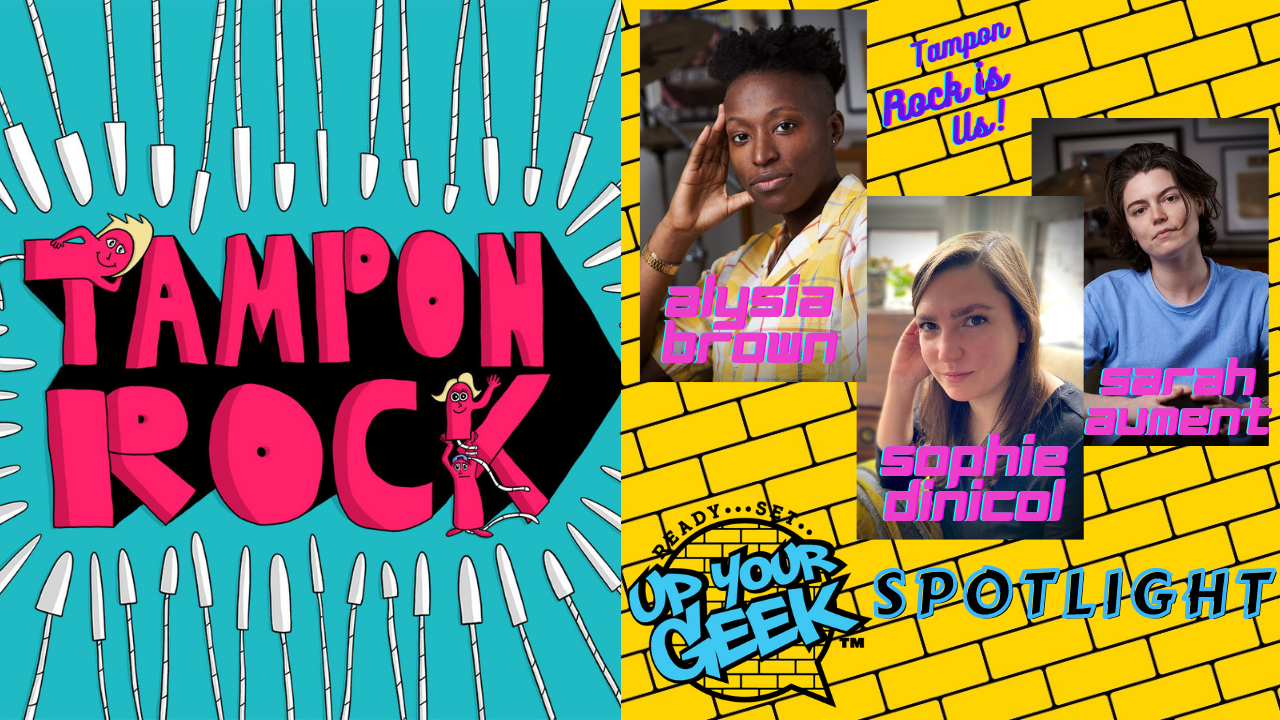 TAMPON ROCK – a new LGBTQ musical comedy podcast from iHeartRadio and Anthem Entertainment Premiered its first two episodes today on all major podcast platforms. We got to interview the up and coming creators, writers and composers for Tampon Rock – Alysia Brown, Sarah Aument, and Sophie Dinicol and discussed the creation of the show, the process of developing characters for a podcast; the comedy and music behind the show, and what they each hope they bring and represent to not just the LGBTQ community, but everyone listening. Also discussed was the purpose of creating a show steeped in realism, but also maintaining a comedic balance in a world often steeped in trauma.

Tampon Rock follows the two lead lesbian characters, Deja and Chloe, through the peaks and downfalls of love within the Oakland, CA dating scene. Deja is a black, mild mannered, queer woman, who is brand-new to the Bay Area. Chloe (Deja’s roommate, best friend and bandmate) is a white, energetic, bit obsessive and strong-willed lesbian, who is as un-shy with her sexuality, as Deja is gun-shy. Together, the women are in a band called The G.O.A.L (The Greatest Of All Lesbians); and this story is set to track the rise of their band and feature original music scored throughout all 8 episodes.

This is not a musical per say, but more of a music-narrated podcast that brings spark, fun and wisdom out of the characters minds and into the scenes. “We’re so grateful that Anthem Entertainment and iHeartRadio gave us the platform to make Tampon Rock.,” said Alysia Brown, Sarah Aument, and Sophie Dinicol in a group statement. “Tampon Rock is the creative love child conceived in our little quarantine community. Exploring these characters and watching them live their lives while we stayed home has been such a wonderful and unexpected part of 2020. We hope the world enjoys listening to our menstruation jokes as much as we enjoyed writing them.” Anthem Entertainment and iHeartRadio co-produced Tampon Rock.

The three creators and writers of the podcast and music, Alysia Brown, Sarah Aument and Sophie Dinicol, are employees of the Jingle Punks, a sector of Anthem Entertainment. “Tampon Rock is a hilarious and heartfelt story about life, love and friendship backgrounded by incredible music,” said Brian Wahlund, Executive Producer, Anthem Entertainment. “I’m so excited for these stories to be told via Anthem Entertainment and iHeartRadio on a wider scale and incredibly inspired by Alysia, Sophie and Sarah for creating and writing this tour-de-force.” Tampon Rock officially premiered today with its first two episodes. Episodes are available on iHeartRadio and all major podcast platforms. The following episodes will release every Thursday. Tampon Rock is distributed by the iHeartPodcast Network.

Check out the full interview below:

Check out the first two episodes of Tampon Rock below: