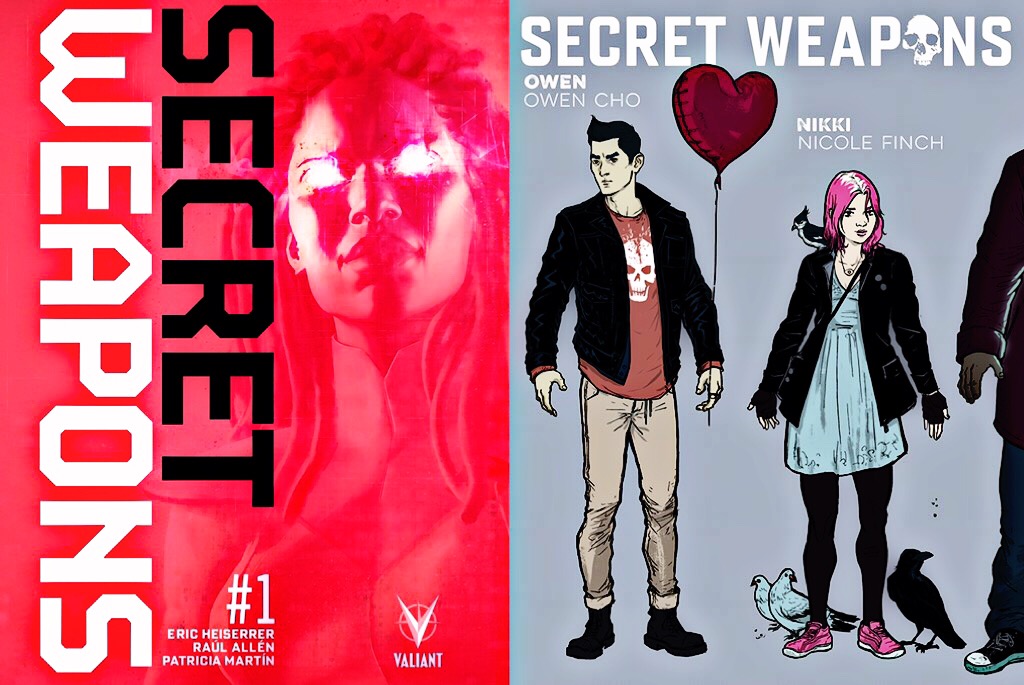 [The government has dispatched Amanda McKee – the technopath codenamed Livewire – to investigate the ruins of a secret facility formerly run by Toyo Harada, the most powerful telepath on Earth and her former mentor. In his quest for world betterment at any cost, Harada sought out and activated many potential psiots like himself. Those who survived, but whose powers he deemed to have no value to his cause, were hidden away at this installation. But Livewire, having studied Harada’s greatest strengths and learned his deepest weaknesses, senses opportunity where he once saw failure. A young girl who can talk to birds… A boy who can make inanimate objects gently glow… To others, these are expensive failures. But, to Livewire, they are secret weapons…in need of a leader. Now, as a mechanized killer called Rexo seeks to draw them out, Livewire and her new team of cadets will be forced to put their powers into action…in ways they never could have imagined…]

“Much like Faith before her, Livewire is a comics icon in the making. She is beloved by fans and adored by creators,” said Valiant CEO & Chief Creative Officer Dinesh Shamdasani. “Finding the right stage for her to shine has been a top priority at Valiant for some time now and, with SECRET WEAPONS, Eric and Raul have crafted something truly special. Not only is this a story quite unlike any Valiant has told to date, but Eric and Raul have created a host of new characters unlike any others in comics. This series is the first step in a long-term plan that will be more than worth the wait, and will have major ramifications for all quarters of the Valiant Universe as we build toward HARBINGER WARS 2 in 2018.

“Without a doubt, Raul is one of the most talented artists in the industry, and every page he sends in leaves jaws on the floor,” he added. “Eric – one of the great storytellers anywhere in entertainment today and one of the sweetest people possible – is able to effortlessly jump between mediums with a passion and intensity that is virtually unrivaled. Together they make an amazing team, and we can’t wait to share their work with the world.”

“My path to Secret Weapons is a bit wonky,” said Heisserer. “I started writing for characters like Pete, Faith, Livewire, and Bloodshot in the film adaptations of their stories. When I am given the opportunity to translate a property to screen, it’s like adopting someone else’s child for a while. I put in my time, try to respect all the hard work of the original authors, and sooner or later I’m on my way.

“The Valiant characters were different, especially Livewire. I kept thinking about her, long after my official writing services were complete. I wanted back into that world. I had crazy ideas for her powers, and the hard choices ahead of her. So, I asked to build a new book for Valiant, with a new group of faces, all led by Amanda. To my relief, Dinesh and Warren said yes.

“Of all the writing I’ve done in the last year, my heart is most in SECRET WEAPONS and its collection of freaks, misfits, and outcasts. And I think a story of a woman who’s shouldered such great burdens, now trying to rescue some lost souls and form a surrogate family, may be one of the most emotional stories I’ve put to paper.

“And where this story goes? Oh man, buckle up.”

On June 28th, 2017 Oscar® nominee Eric Heisserer and visionary artist Raul Allen follow in the footsteps of HARBINGER and FAITH to forge a new vision of 21st century superheroes as Livewire steps to the fore with an all-new team of heroes in the waiting, only in SECRET WEAPONS #1 (of 4) – coming soon to a comic shop near you!

Freaks and Geeks! Please check out some exclusive pages, designs, and cover artwork below. Courtesy of Valiant Entertainment.