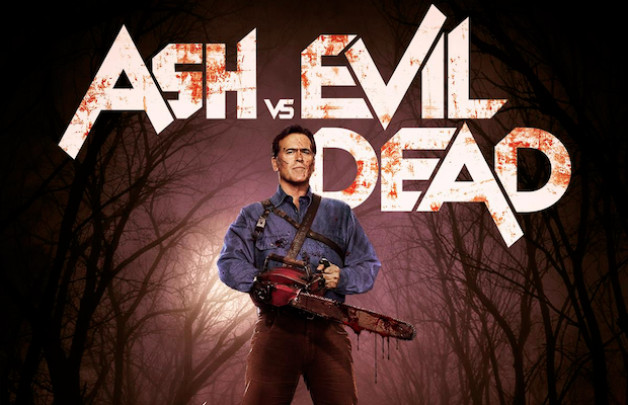 The Evil Dead Franchise is one of the most popular horror franchises of all time. Spanning 3 films in the original series, a remake, a few video games, and a musical this series has made its mark in the realm of horror. It’s impact is felt in film to this day. Even with all of this, it still holds its cult status. The films were originally made with independent spirit and gusto and since then the fans of this franchise have embodied this spirit. The fans are a dedicated group and when news of a television series sequel that doesn’t tie into Army of Darkness was announced fans were excited, but also cautious. Revivals of franchises that have been dormant for some time often have trouble getting off the ground when brought back. They have issues at adapting what made the originals so successful without making a direct copy. In addition to trying to recapture the magic, revivals can sometimes feel like a light version of the thing they loved. This was absolutely not the case when Ash Vs. Evil Dead premiered in 2015.

The series is filled to the brim with the humor and heart that has made the franchise so incredibly endearing. It is extremely apparent that right from the very first episode the show is an official sequel to the films. In its most pure form it brings back Bruce Campbell into the role that has made him a popular horror icon. In addition to Bruce’s return it was also created by the original team. The pilot episode was even directed by Sam Raimi himself bringing a sense of legitimacy to this series. It feels like a loving return to form for Ash and the franchise.

The Writing, directing, and effects all fall in line with what the franchise has brought us in the past, but turned up all the way. The series uses the simple fact that it is on Starz to not hold back in terms of gore and  uncensored content. It even pushes the boundaries for the franchise itself allowing for many surprises to occur. Surprises that top what has been done in the past. With this it has given itself the freedom to be as outlandish as this franchise needs to be. While initially it was a surprise that the show was a 30 minute comedy series, but after 2 seasons it is apparent that this shorter episode format works in its favor allowing for the narrative to move at a much quicker and tighter pace, the humor to hit harder, and the blood to continue flowing.

All of these elements help to form a series worthy of the franchise giving us some incredibly hilarious and memorable moments to latch onto.

How It Compares To Other Revivals

Reviving your franchise, especially for television, is an incredibly daunting task. There is a lot to consider especially when the fan expectations can be so incredibly high. You have to find ways to please your core fanbase while also enticing new viewers. It’s a struggle that a lot of franchises have. What works with Ash Vs. Evil Dead is that it does this effortlessly. It was able to find a way to bring life to the tone that the previous films set and was able to combine the three films to feel like a love letter to the franchise and the fans. In addition to covering new ground the show brilliantly introduces new levels to ideas that were already in place. It answers questions, while also creating its own.

The recent trend of reviving old franchises is at an all time high. Everywhere you look there is a new entry in a long running franchise making a return. These shows often try hard to capture the feeling of the originals while also doing new things. Sometimes this works, but often it leaves fans feeling displaced and new fans aren’t as interested. They often return to poor reception or ratings and that has to do with the passion that goes into reviving said franchise. You can certainly tell the difference between the creators wanting to revive their franchise and those that just want to make money off of it.  Ash is a show that cares about its fans, it cares about its legacy, and it also cares about telling new stories.

What Other Revivals Can Learn From It

The series is smart in that while it still retains all of the fan service you would want in a revival it also is not afraid to take risks. It’s incredible to think that in a show about Ash you end up caring just as much about the new characters. Pablo and Kelly are characters that have been given the time and space to grow into their own. Their relationship with Ash works and the way the show throws them in dangerous obstacles and gives them space to be important is refreshing. Having these characters was a risk, but one that proved for the best. Risk taking is certainly a tool that can be used to make something special. It shows confidence in their creation to do new things to surprise fans. It allows to think outside of the narrow definition of what makes the series in itself so special. If something plays it a little too safe it can feel like a lifeless retread. Ash brilliantly dodges this potential trap.

There are certainly revivals that absolutely do what Ash does well and some shows even play down the fan service. Twin Peaks:The Return is an example of a show that does this and does it so well that it becomes a masterpiece in its own right even if it feels like a completely different show. Playing to the complete opposite of what is expected, Ash focuses on balancing this and for what it does it’s masterful. Other series can learn to take a look at where their franchise came from. They can learn how to honor said franchise, but also tell new stories. It’s good not to try to emulate your success, but to honor your success by being creatively inspired and doing the series justice.

Ash Vs. Evil Dead is a show I never miss. It’s must watch television and with the series getting critical acclaim and continued success it is obvious that the format of handling needed fan service while doing new things is a winning formula. It’s a new breed of revival that works so well in its own right that is deserves the recognition it has gotten. It’s a great template for other series to look at and see how to handle a revival.

The brand new season of Ash Vs. Evil Dead premieres on February 25th on Starz. Don’t miss this if you’re a fan of this series.