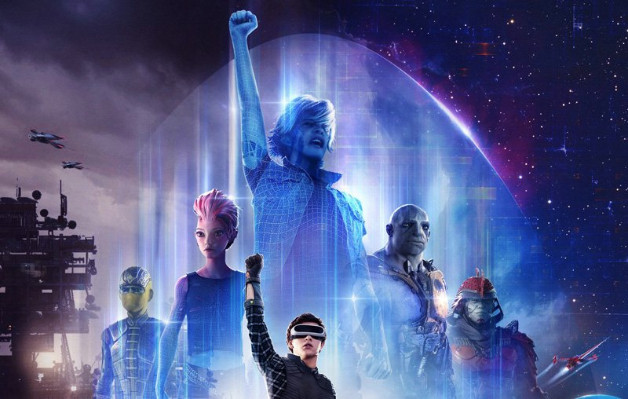 One of this year’s most anticipated films from the geek community was that of Ready Player One. It’s based upon a novel with the same name and followed a futuristic society obsessed with pop culture. The original novel was a smash hit selling many copies off of the nostalgic and fun tone that it delivered. It has been praised for this and criticized for this as well. As someone who has read the novel I was extremely curious what the big screen adaptation would do with it. There are some moments that are impossible to recreate in a live action film so I was looking forward to the necessary changes. I’ve been looking forward to the film for some time and while we wrote a great review already I wanted to give my perspective on the film and I’m certain my point of view will be different because it not only matched my expectations for the film, but it went beyond that. Here’s my Spoiler-Free Review of Ready Player One.

The film is set in Columbus, Ohio in the year 2045 in a place known as “The stacks”. The world has been heavily polluted and overly crowded so mobile homes are stacked up as high as possible. With the world in such dire shape the people no longer live their lives in the real world, but in the virtual world called The Oasis. Created by James Halliday, The Oasis is a virtual playground where anything you want can come true. You can be anyone and do pretty much anything. When James Halliday passes away a game is put into place. The first to find the hidden Easter Egg after completing a series of challenges will win the entirety of his fortune and complete control over The Oasis. The race is on as our hero, Wade Watts attempts to find these challenges and stop the evil corporation IOI from gaining control.

The plot while a bit on the typical and simplistic side works to its benefit. It allows for likable characters the room to breathe and allows for us to root for them along their journey through tons of easter egg and cameo laden areas. It’s filled to the brim with recognizable characters from films, comics, cartoons, and everything in between.  With it being an adaptation of a novel things will have to change and the changes made here work to its benefit as a film as opposed to a novel. One of the most obvious changes was the first challenge being a giant car race, which does not happen in the book. This sequence extremely well in the context of a film. The changes made as a fan of the book work well and while I would have liked the story to have given more depth about the world it still does an excellent job at adapting it to fit into the frame of a two hour film. It’s certainly an example of how a fun film with a simple, but well executed plot can work to it’s benefit.

The true star of this film is all of the talent involved in not only the production but the acting as well. They all serve their purpose well to tell this fun and engaging love letter to nerds everywhere. The biggest thing to discuss with this film is the creative crew. The author of the novel, Ernest Cline and Avengers writer, Zak Penn collaborated on the screenplay for the adaptation. It’s rare to have an author be so hands on in the production of their adaptation, but when they do it often results in a better film. This is an added benefit to the real star of the production and that is of course Steven Spielberg. Spielberg is one of the most famous and well respected directors in Hollywood. His work as a director and as a producer paved the way for a lot of modern classics to have happened and it’s reflected in the film itself. Spielberg’s talents are felt in every frame of this film. When given the opportunity to make a fun and action packed adventure story with likable characters he can easily knock it out of the park. In my view there was no better filmmaker to have adapted this novel besides him.

The other talent involved in this include the cast who all give solid performances in the roles they are given. None of the portrayals are exactly breathtaking, but they all serve the story extremely well in their characterizations. A stand out is that of James Halliday played extremely accurately by Mark Rylance. As a fan of the novel his portrayal accurately reflects the character that I read and was impressed by Rylance’s ability to capture the socially inept character extremely well. The rest of the cast are also great as well, but the real star of the film is in the technical side.

This film is incredibly unique in that a huge portion of this film is animated completely in CGI. Whenever it’s in The Oasis we never see a real person, but the avatars the characters use. Sometimes an abundance of CGI can be a bad thing, but the animation is done so incredibly well that everything looked phenomenal. The cinematography in the live action segments also are done extremely well to highlight the feeling that this game is born from this world. The entire production crew did great work at bringing this World to life both in the bleak reality and in the exaggerated Oasis. The car race sequence in the beginning of the film is a perfect example of the visuals at work. The visuals work as both a way to bring a sense of nostalgia with all of the references, but they also work as a way to serve the narrative first and foremost.

The musical score is also a great accompaniment as Alan Silvestri who gives his talents to give the audience a fun ride. In addition to the good score we also have an excellent selection of mostly 80’s music hits that fit well with each sequence in the film. The technical side of this film is a home run that serves the film well.

Ready Player One is one of the most entertaining films I have seen in a long time, It’s not a perfect film by any means, but it’s emphasis on telling a really fun and exciting adventure story as a love letter to nerd culture is certainly appreciated. As a self-described nerd and pop culture junkie I enjoyed every minute of this over the top film that really works because of the good source material and Spielberg’s talents as a filmmaker. It brought back the fun that isn’t as common with his films as of late and it was an absolute joy to sit through. I plan to see this many more times and I hope you all enjoy it as much as I did.

Ready Gamergasm One: Ready Player One Review (No Spoilers)
Batman v. Superman: How It Has Been Able To Stay Relevant For Over Two Years