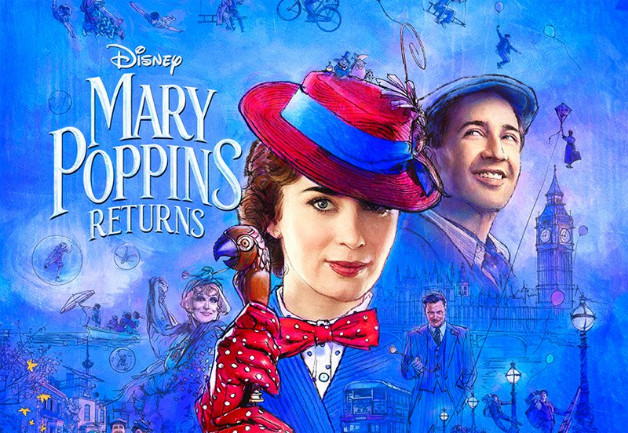 One of the most iconic Disney films of all time is the classic 1964 musical Mary Poppins. It’s wondrous joy and magic presented encapsulates what Disney means to so many people. It’s a big musical with a lot of heart and charming performances from its leading stars that has earned a place in the hearts of many generations of people. This classic Disney musical was a big win for the company and it remains just as iconic today as it ever has been. With that said there was a lot of hesitation when Disney announced that they would be stepping back into the world of Mary Poppins for a new adventure. While this may have seemed like a reboot it was announced that it was a sequel and the film Mary Poppins Returns was set on the Disney schedule. People have been eagerly awaiting what Disney would do in this sequel and whether or not it would be good. I myself was skeptical at first and I didn’t know how a sequel could work, but the film proved itself to be something magical. Here is my Spoiler-Free review of Disney’s Mary Poppins Returns.

The plot of the film is crucial in setting up the World and the themes present in the narrative so without going into spoiler territory here’s a brief synopsis. The film takes place during the Depression Era in London many years after Mary Poppins first entered Michael and Jane Banks’ life when they were children. Now both of them are adults with Michael having had his wife pass away and being left to take care of his three children Anabel, Georgie, and John. When the bank notifies Michael of the repossession of his home Mary Poppins makes a surprising return to not only look after the children, but also look after and care for Michael as well. Her unexpected return leads this family on a crazy adventure wrapped into a bigger than life musical in the hopes of keeping Michael’s home from being taken away from them.

The film relies heavily on the fact that it is a direct sequel and in a lot of ways understanding the first film’s story is crucial to going into this film. It doesn’t hold your hand in telling you about the world and it still does a great job at following up the original film in that Mary Poppins isn’t rationalized. She’s just a magical force that appears to shake up their lives yet again. The film does an excellent job at continuing the story and throwing in easter eggs without it feeling overbearing. Everything is in service of the story and in turn the plot is in service of the incredibly well made musical numbers. The narrative is simplistic, but that’s a purposeful simplicity. It’s plot hits very similar beats to the original and while some may see this as a detriment I look at it as a great way to pay tribute to the original while also finding new ways to tell a Mary Poppins’ story. It uses similar sequences and events to call back without entirely being a remake scene by scene and it even takes its time to do new things.The narrative very effectively carries the emotional weight and tone well  allowing for visual and musical freedom.

Mary Poppins was a one-off film from 1964 and to bring a sequel to life and to do the original justice you have to bring in someone who can handle the responsibility. Director, Rob Marshall who has been mostly known for his award winning adaptation of Chicago as well as other musical films stepped into the Director’s chair for this project and his visual sense of bringing musical worlds to life is ever present in this film. He has an eye for bigger dance sequences as well as getting great performances from the cast that he works with. His unique vision is ever present throughout, but it’s used to create a London that feels similar to that of the original film. His direction lead a crew of talented people to create some of the most visually vibrant scenes. The direction is handled so well that the talents of everyone are on full display and this certainly includes the extremely talented cast and performers.

The cast of the film deserve recognition for selling the audience on the characters and the world they inhabit. Ben Whishaw plays Michael with such heart and earnest emotion that he ends up at the center of the films world balancing the magic of Mary and the reality of the situation of losing his wife and dealing with financial issues. His performance was quite appropriate and moving at times. While he is great, Lin-Manuel Miranda has a more prominent role filling in the for Bert and helping to steal the show in many occasions with his talent as a singer, dancer, and many other skills he acquired through his mastery of live theater. He brings his musical talents to this film and it’s a joy to see him perform the phenomenal music he is given. He does such a great job not only with the children, but with Emily Blunt. Emily Blunt is one of the absolute best parts of the film. Her performance is incredibly accurate to that of Mary and whenever she is in a scene it doesn’t feel like you are watching someone trying to do a Julie Andrews impression, but someone accurately inhabiting Mary Poppins. She is excellent in the role and deserves the credit for this brilliant performance.  She definitely gives the best performance, but every member of the cast did such great work at bringing this magical tale to life through the great characters.

When discussing the technical side of the film one of the most stand out moments is that of the incredible choreography and set design. The musical choreography of the film is extremely important in bringing the moments of songs to life and while it is easier to create a simple set to highlight the choreography, the film builds the sequences around the choreography making each of the sets fit within the world. These sets still allow for the huge sequences to play out harkening back to the feeling the original film gave off in these moments. It’s big moments are aided by the stellar set design as well as the beautiful use of CGI effects and animation to capture the magical qualities about the world in stark contrast to the dark and drab areas of London. It’s a well thought out and technically impressive film that is a treat to view.

On the other end of technical attributes it’s important to discuss a huge part of the film and that is its music. While the original films songs were written by the Sherman brothers, the new film had original songs written by Marc Shaiman and Scott Wittman. This team, like the Shermans, worked hard to capture a whimsical tone for Mary Poppins, but also more emotional songs to capture the feelings of the other characters. The songs do an excellent job at keeping it within the same tone as the original music and it certainly feels like a worthy continuation of songs that fit the world of both films. The musical numbers are the highlights of the film and every scene is engaging with songs that can easily remain in your head after you leave the theater. In a musical the songs are crucial in telling the story and this film is no exception. These new numbers make the film come together nicely. It’s certainly a worthy sounding sequel in addition to the combination of multiple technical aspects that work so well.

Taking on the reigns of one of the most famous films from Disney must have been a daunting challenge and luckily the film doesn’t buckle under the weight of the lofty goals. The film plays as a loving and moving tribute to the original film and while at times it can feel a bit slow with some minor pacing issues, the great moments do shine to make this a memorable experience. If you grew up with or loved the original Mary Poppins than you will most likely get the same joy and experience with this film that I did. It’s a heartfelt tribute to one of the greatest family films of all time and it expands it with modern technology and heart. It’s certainly worth your time if you love the original film or just want a highly entertaining musical experience.