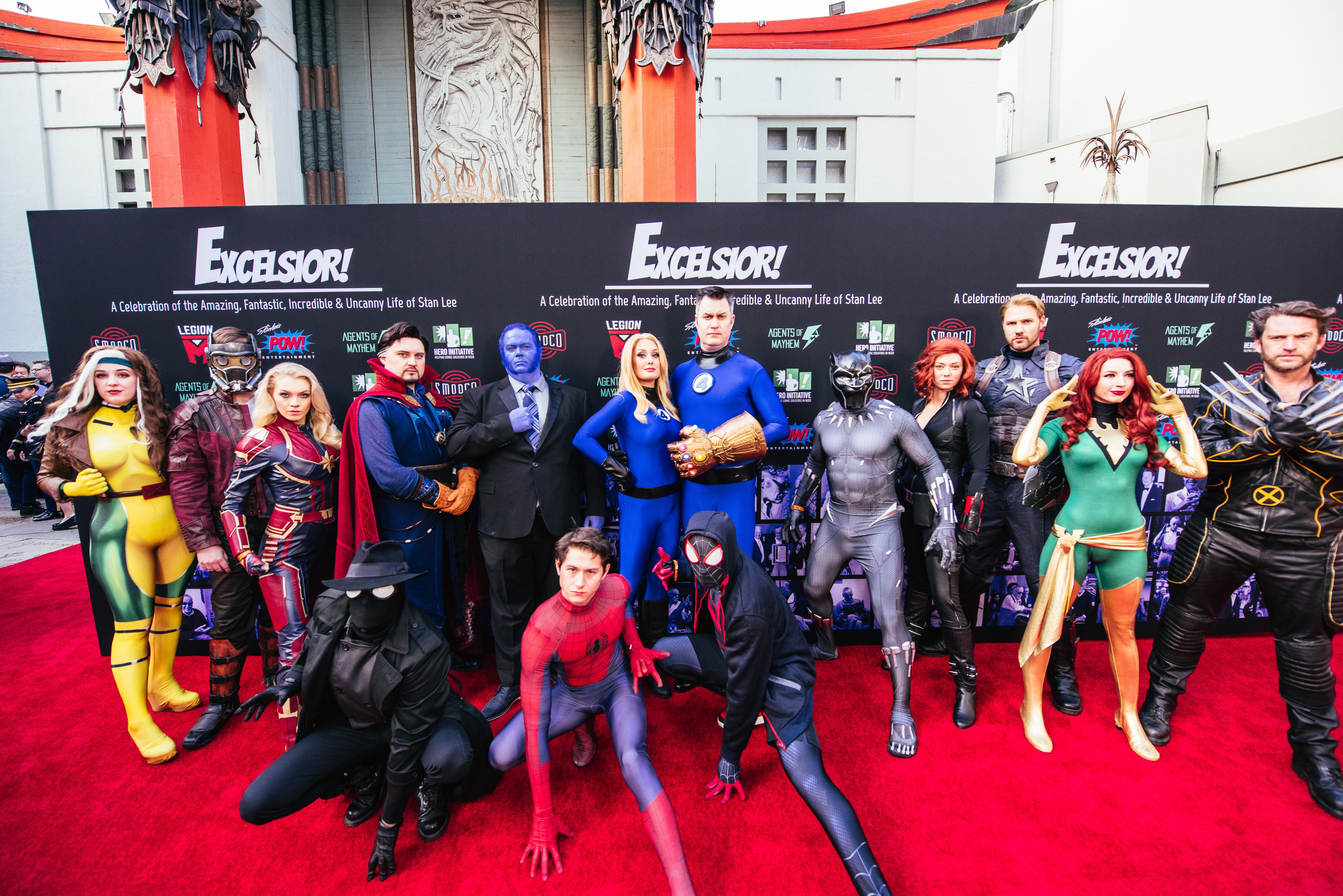 Hollywood, Calif. – January 31, 2019 –  Hollywood’s biggest names from the stage, screen and television, along with luminaries from the world of comics and thousands of adoring fans, gathered Wednesday evening at the iconic TCL Chinese Theatre in Hollywood to celebrate the life and career of legendary storyteller, Stan Lee.  “Excelsior! A Celebration of the Amazing, Fantastic, Incredible & Uncanny Life of Stan Lee” was a fitting tribute to the man many simply referred to as “Stan,” but who was revered as a hero like the many unforgettable ones he created.

Smith said during the tribute, “I knew Stan for 23 years, and one of the most ironic things I thought about today was that he didn’t understand his own genius in this lifetime.  This was a man who spent most of his life dreaming of writing the great American novel, and never realized he had done it so many times, over and over again.”

The tribute commenced at the TCL Chinese Theatre forecourt, where fans left flowers, candles and other keepsakes around a memorial centered around Stan’s cement imprint, and signed a book of condolences.  Fans were immersed in a world of Stan through art, including iconic photos, artwork, Stan’s classic comic books and memorabilia also on display, along with a special preview of pop-culture artist Rob Prior’s upcoming gallery show The Legacy Collection of Stan Lee.  Prior completed a live painting in the forecourt and artist Jennifer Contini featured her series “This Love Lives On” featuring images of Stan Lee.  Attendees also indulged in one of Stan’s favorite snacks, White Castle, as the White Castle Crave Mobile served sliders in the forecourt.

Producers of the event, fan-owned Legion M’s Terri Lubaroff and David Baxter, Stan Lee’s POW! Entertainment’s Bob Sabouni and Agents of Mayhem’s Darren Passarello, greeted fans and introduced several public speakers before Kevin Smith arrived and assembled an honor guard of world class cosplayers representing many of Stan’s co-creations, including Avengers, Spider-Man, Dr. Strange, and more who paid their respects and led the crowd in a final salute to this legendary pop culture icon accompanied by a police band of pipes and drums playing “Amazing Grace.”

Veterans from Veterans in Media & Entertainment and The American Legion of Hollywood Post 43 honored Stan for his service during World War II, and Chief Paul Cell, President of the International Association of Chiefs of Police, recognized Stan’s contributions for his work supporting law enforcement and creating safer communities.

Family from the other co-creators of the Marvel Universe attended to pay their respects and joined in the celebration, including Tracy and Jeremy Kirby, grandchildren of Jack Kirby, Mark and Stephen Ditko, nephews of Steve Ditko, and Jenna Parker, daughter of Sol Brodsky, all of whom were part of the original Marvel Bullpen.

Actor Laurence Fishburne said, “I was a New York City boy, and Stan was writing about what was outside my window.  That was so important because it was about the place where I was from, and that just opened my eyes to the possibility that you could be so much more.”

Nikki Frakes, director “With Great Power: The Stan Lee Story” remembered a conversation she had with Stan, “I asked him, like he had been asked so many times, what would your superpower be?  And normally he says ‘love’, but that night he said ‘immortality’.  Looking out and seeing everyone here tonight I think we all know that he has achieved that immortality in each of us.”

Members of the creative team behind the Academy Award®-nominated “Spider-Man: Into the Spider-Verse,” including writer/producer Phil Lord and producers Chris Miller, Avi Arad and Amy Pascal were also on stage to honor Stan.  Producers Lauren Shuler Donner and Derek Hoffman rounded off the evening’s panels as they spoke to and celebrated the modern impact of Stan’s characters through two decades of X-Men in film and television.

Former Marvel Studios CEO Avi Arad said, “Marvel was always the standout in storytelling.  It was about humanity.  People being friendly, people being frail, people being afraid, and showing us that anyone can be a hero.”

The celebration also featured video tributes from stars who are unable to attend, including Dwayne Johnson, William Shatner, George Takei, and David Tennant, as well as live celebrity performances of Stan’s favorite music and poetry.

All net proceeds from the event will go to the non-profit organization The Hero Initiative, a charity supporting comic book creators, artists and writers in need.  Producers of the tribute event will continue to share memories from the event via social media feeds. Feel free to follow the social channels for Kevin Smith, Legion M, Agents of Mayhem, and Stan Lee’s POW! Entertainment. (@TheRealStanLee, @ThatKevinSmith, @LegionMOfficial, @AgentsofMayhem).