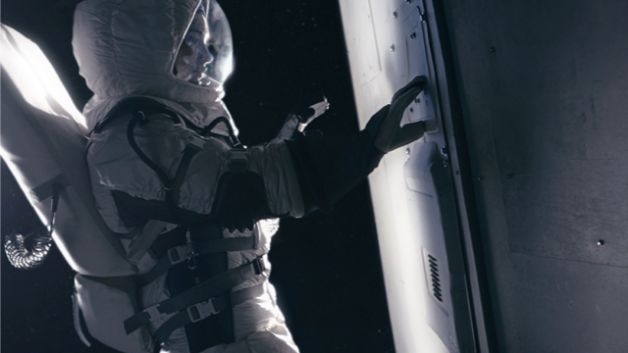 When it comes to the world of filmmaking one place to look at for constant creativity and ingenuity is at the often overlooked medium of short films. The length of these films allows for storytellers to explore new territories and tell stories that have the potential to push the limits of the realm of filmmaking. I’ve dabbled in my own short films as well and while at times working within the time constraint can be limiting I found it exhilarating how it forced me to use every minute carefully and find visual ways of expressing the meaning of the narrative. The Multiplatform sharing distributor known as DUST has been steadily compiling some of the best short Science-Fiction films and releasing them through digital means including on Roku devices with their most recent service, DUSTx which has both their short films as well as famous films and television programs. In the spirit of the celebration of multiple talented voices for DUST the first film that I had the pleasure of seeing is a French film called, On/Off. I decided it would be best to review this fascinating short film in a non-spoiler way as it is my introduction to DUST. It is quite a great first impression.

The film was written and directed by French Filmmaker, Thierry Lorenzi and follows two astronauts on their time aboard a space station. Meredith is not in great shape and is haunted by an unusual voice that threatens to topple her understanding of her existence in this tiny vessel above Earth. The film’s story is quite interesting. It explores multiple thematic elements including identity and love while framed in a Science-Fiction world. The space element, while important to the story, is used to represent the humanity of the lead character and to reflect her Journey. Her co-pilot plays a pivotal role in this story as well, but since it is such a short film it is impossible to discuss much without spoiling the best elements of the story. I appreciated that the film had much more to say than just a surface level exploration. The absolute best in Science-Fiction takes its time to look at and know the humanity of the lead characters. It is a perfect medium to reflect modern sensibilities and the modern world, while also being incredibly interesting to look at.

The film’s narrative speaks to something deeper than what is on the immediate surface, but the thing that stood out to me as a short film was the filmmakers ability to create something that was visually beautiful with the apparent small scale they had to work with. The cinematography in addition to all of the fantastic special effects were gorgeous to look at. Film is a visual medium and so much of this short film is told by the visual cues given to us. The greatest part about this film is that a large portion of it embraces a dream-like quality. It’s use of surreal elements actually enhance the story and make for a much more compelling watch instead of relying too heavily on the dialogue. As a fan of short films I’ve realized that the best ones often let their visuals speak for themselves instead of focusing on dialogue. While dialogue can be used beautifully I believe that a film’s visual aesthetic is something that should be the main focus. This film benefits from the visuals which will make me want to return to it to admire it.

With this being my first foray into the short films presented by DUST I have to say that this film really impressed me. It was obviously made with a lot of passion and care for the craft of filmmaking. It was extremely well thought out and definitely deserves to be admired for its ability to succinctly tell a unique story, while also giving something incredibly beautiful to look at. The performances from the two cast members really allow for the material to shine and it is obvious that they were dedicated to the narrative. They all worked well together to create something unique and this film has made me want to take a closer look at many of DUST’s other original short films. I hope to see more films from director, Thierry Lorenzi because he has a visual style that is well suited for science-fiction. His work is thoughtful and simultaneously emotional.

I would normally take the time to give a score for most of the films I review, but I feel with short films assigning a number value to this type of film isn’t helpful in determining its quality. The film speaks for itself and while I can see this film not being for some people I found it to be really engaging and inspiring as a short filmmaker myself. When On/Off releases on April 18th on DUST I highly recommend you take the time to watch this 13 Minute short. It is worth every second especially if you love science-fiction and the craft of filmmaking.

Check out the trailer below: