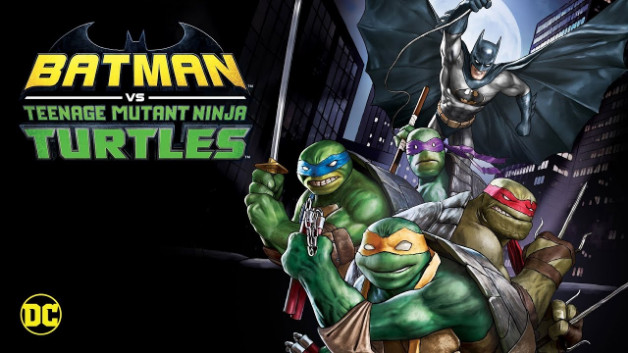 The DC Animated films have been a constant thing to look forward to in Geek media. These films have done a great job at expanding the DC lore with different iterations of comics, different adaptations, and unique entries that haven’t been done before. In a crossover that wasn’t as expected DC animation took the time to adapt one of their most unique comic series. This comes in the form of Batman vs. Teenage Mutant Ninja Turtles. This crossover was a fairly well recieved story arc that occured in the comics, but making an animated film based on that is surprising to say the least. I don’t think anyone expected DC to partner with Nickelodeon to bring this new animated film to life, but they did. I had the fortunate opportunity to see the World Premiere of the film at Wondercon 2019 in a room filled with fellow fans. While this film may not be the darkest or even the most fun entry in DC’s animated film series it does do so many things right.I was hoping for a fun time with it and in the end the film ended up exceeding my expectations. Here is our very early and spoiler-free review of Batman vs. Teenage Mutant Ninja Turtles.

The film’s story revolves around Shredder heading to Gotham City for mysterious reasons. His goals aren’t immediately clear to Batman and the Batfamily, but after a brief encounter with him they begin to investigate him as a threat to Gotham. Meanwhile the Teenage Mutant Ninja Turtles soon arrive to investigate Shredder as well and his plans on their own. The Turtles paths cross with Batman as Shredder teams up with Ra’s Al Ghul and many of the other famous Gotham villains. It’s up to the turtles, Batgirl, Robin, and  Batman to put aside their differences enough to trust one another to stop this villainous threat before the innocent civilians of Gotham are harmed by this team up of these powerful villains.

The film’s plot relies heavily on the setting up of multiple characters and how they interact with each other for the first time so I do not want to mention too much in fear of spoiling the best moments, but the story for the film is quite good. If you are a fan of both Batman lore as well as the Ninja Turtles then there is a lot to love with their unlikely pairing. The best scenes in the films are with the Turtles interacting with the Batfamily. The villainous threat is there to bring these heroes together and it works quite well giving us a decent taste of both franchises, while still maintaining a focused narrative. It’s a story that easily could have been mishandled and overly complicated, but it balances the villains and cameos with the character interactions easily. The heroes are very well written with some great moments of legitimate tension, while also throwing in some comedy. Every character acts as they should, which I imagine is challenging with these two very different types of franchises. The narrative does a great job at keeping the audience engaged while staying faithful to the legacy of both DC comics and the Ninja Turtles.

With a film as multifaceted as this is in terms of balancing franchises it takes some serious talent working together to create something that is satisfying. The film’s director, Jake Castorena,  is known for his work on DC’s other hit film, The Death of Superman from last year. His work in this film is quite exceptional seeing how much he had to work with the art department to get everything correct. His style is not an overbearing presence in the film unlike a lot of other filmmakers that I have discussed. He lets the work speak for itself and in some sense his direction is meant only in service of the story without a focus on who is behind that story. That necessarily isn’t a bad thing because he is able to bring all of the departments together and make a film that is an absolute blast. His direction is most felt in the incredible talent of the cast assembled and their great performances of these beloved characters.

The cast of this film is filled with some incredible talent from Darren Criss to Rachel Bloom in addition to some very prolific voice actors including John Dimaggio and Troy Baker. The entire cast is extremely talented, but Baker should get a lot of credit seeing that he does double duty in this film playing both Batman and the Joker. His performance for both characters is very solid and really brings a weight to these characters that gives the film legitimacy on the front of being a Batman film. In addition to Baker the cast of the Turtles really do get a chance to shine in their roles accurately portraying their personalities correctly and definitely delivering great moments of comedy and levity when it is needed. The cast really help to elevate this film to make every character work. It’s an excellent collection of talented people working with a focused director.

Animation is a unique process in the world of filmmaking. Its use of drawn characters and environments to tell its narrative is unique compared to most films I have reviewed here. The animation utilized in the film was quite good. The action sequences are great. They are smooth and fast paced while delivering some genuine moments of shock and violence. Those moments keep the film engaging constantly. The only issue that really does have some faults is in the design of some of the character. Batman and most of the Batman villains look great, but the design on some of the Ninja Turtles feels a bit off. They don’t look as great as the Batman aesthetic, but that is the challenging aspect when trying to merge stylistically different franchises.

The film soars when action is taking place and the music of the film does carry it through well enough even though it may not have been the most memorable aspect of this film. It exists and it definitely has its place, but it’s nothing truly unique. This in the end doesn’t matter as much considering the music does serve its purpose well and the animation carries the rest of the weight of the technical side of this fun film.

Batman vs. Teenage Mutant Ninja Turtles is one of those animated films that works best when you are a fan of both franchises. The film is filled with easter eggs, meta humor, and great action that it serves its purpose of specifically being done for the fans. It does require the audience to have an understanding of the characters present in both franchises and as someone who does I found myself really enjoying it. This film is filled with heart, action, and humor. It stands out amongst many of the other DC animated films and it certainly earns its place in the positive light even if it has some elements that aren’t outstanding. I highly recommend this film if you love the Njinja Turtles, Batman, and DC’s line of animated films.