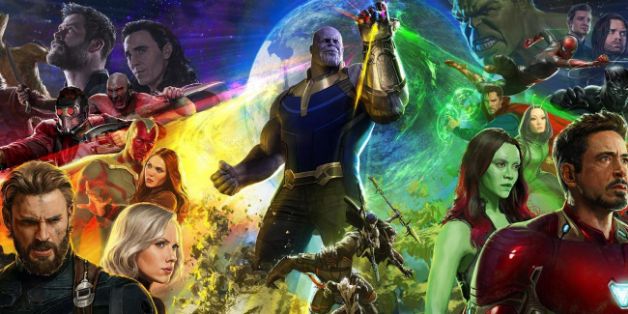 Superhero stories as we know them are fairly new considering that they came to popularity  in the early half of the 20th century. They came about during a time of great trouble in the US, which included the Great Depression and the beginnings of the second World War. Many people were looking for escapist entertainment that highlighted the potential for good. These stories really gained early popularity with children, but over the years as the medium progressed so did the age of the readers. Superheroes have quickly become modern time icons that many people tend to look up to. With anything popular Hollywood usually likes to take their opportunity to adapt said work and for a while the early successes in major films were the 1970s Superman and the 1980s Batman films respectively. These films were landmarks in changing how superheroes were viewed and how they can be presented for a wider audience. Marvel in itself didn’t really find success until the early 2000’s with Spider-Man,  X-Men, and Blade films dominating the Box Office. These prior successes paved the way for the original Iron Man to be released in 2008 and kickstart one of the most successful franchises of all time, the Marvel Cinematic Universe. It’s success has been ever present and with the incredibly massive success of their latest film, Avengers: Endgame there is no better time than now to discuss why exactly this franchise is so insanely successful and why it is so beloved.

There are many factors present in determining what is and isn’t a success, but an easy one to look at first is the characters that have made their mark through the popularity of these films. One of the most difficult things to overcome when the Universe first started was that Marvel’s most popular characters were tied up with film rights at Sony and Fox meaning that they had to not have them be their starting point for a shared Universe. This in turn worked to their benefit because when Iron Man was released no one expected that a movie based upon Tony Stark would take off as much as it has. Robert Downey Jr. set the bar when it comes to characterization and this gave him a second life as an actor. His portrayal was immediately praised and he has consistently been delivering a fantastic performance in every appearance since. This stellar character set the bar for future performers to step into other popular superheroes and their portrayal as these characters have made this Universe unique. The love for these characters have been immense and each installment just keeps bringing more people into the fandom.

In addition to Tony being perfectly portrayed it is impossible to forget about the other actors including Chris Evans who has made the perfect Captain America and has been getting better in every appearance. So much so that Cap like Tony have become a household name. Prior to this franchise Cap wasn’t on the same level of popularity as other superheroes like Spider-Man, Superman, and Batman. The MCU has made Cap a focal point and because of this it has been hugely successful due to the extremely talented performance of Chris Evans. While most filmmakers would be happy having a few characters at the front of popularity,  the MCU has never settled and they kept hiring some great talent to portray other superheroes such as Chadwick Boseman as Black Panther, Chris Pratt as Star-Lord, and of course Chris Hemsworth as Thor. The constant addition of new talent to this ever growing list of superheroes has been impressive and the success of these films lands upon the audience’s investment in these heroes and their journey. Their journey is even more heightened by the incredible dedication to the interconnected nature of this 22 film long Franchise.

Film Franchises have existed in film long before the MCU came about, but something that had been missing in Superhero films prior to 2008 is the care put into having a Universe that connects these iconic characters together just like in the comics that these heroes are based upon. The thought of committing to creating multiple films over multiple years and interconnecting plot points with multiple heroes and their individual worlds is a major challenge to put forward with from a Hollywood production. When Nick Fury showed up in the post-credits scene of the original Iron Man no one would expect that this would lead on to following through with the promise of a connected Universe of characters. The fact that it has been able to continually build upon that is an incredible feat of Producing.

This execution of a promise to bring these heroes together has done nothing, but give fans what they have been wanting to see in comic book films. It has been a dream for many to see these characters explored in such a big way with an immense amount of talent put into every frame of this World. All of these heroes should be working together and so far the MCU hit the ground running with this concept and hasn’t wavered in stopping. This continued connection of films have been incredibly exciting especially when you see certain characters make cameos and appearances in the other films in multiple ways. It continues to make the films feel even more like they are sharing a universe rather than these stories feeling too alienating from the rest in any way. With as much different perspectives working on these projects staying consistent is a challenge, but for the most part it has been a major success. The inherent interconnected nature of each film has directly led to its success because if you are a fan you will not miss any entry in this series. It is fair to say that with certain characters having their own franchises most fans will still see every film the MCU releases regardless of the characters at the top billing. They will stay with it and support it hoping that this new entry expands the Universe in a meaningful way. This in turn makes each subsequent film important and leads to the huge box office success we have seen with Avengers Endgame. This film in particular represents the attachment fans have to this series and it being the culmination of everything further proves my point about it’s interconnected nature being crucial to the success of the MCU as a whole. While this is a major aspect. the most important factor that also shouldn’t be overlooked is the talented filmmakers who have lent their abilities to these films.

Jon Favreau was the first filmmaker to step into the director’s chair with the first Iron Man from 2008 not knowing whether or not he would be able to pull this off, but he just wanted to make a great film. With this attitude he was able to succeed beyond what he set out to do and his position kicked off what was to be the success over the past 11 years. His creative vision set the tone for the MCU and his comedic style mixed with action and drama is still as impactful today as it was when he released the film originally. The talent of this filmmaker is an example set for the rest of the people that have stepped up to creatively contribute to this series. They all have contributed to the lore and the stories that founded this interconnected world and each person has brought their own personal touches, while keeping these films firmly grounded in the same world.

One of the most important influences on the comedic tone mixed with action has to be Joss Whedon. He was brought on to tackle something that could be extremely difficult and that was to bring the team together for the first time for the original Avengers. That film really was the first test to see if their Universe would work and it did. It made quite a lot of money and got a fair amount of critical acclaim, which was incredibly exciting for fans of the series at that point. Joss’ talent at writing engaging and hilarious characters helped to set the more fun and comedic tone that continued on and is still felt to this day even in the most recent films. In addition to Whedon’s humor, Anthony and Joe Russo came on board to direct Captain America: The Winter Soldier and with their presence brought newfound respect and critical acclaim from their ability to keep that humor present while also bringing a more serious tone to the MCU. This more layered approach has been felt in each of their films leading up to Endgame and that tone will certainly be one that will continue past them into the future of these films. The talents and the tones layed down upon by these filmmakers have led to the films being very well made and very well loved. This love has equated to loyalty to the franchise from the fans and that leads directly into its overall success. The people behind the scenes spend time to craft films that try to be true to the spirit and tone of Marvel comics. This dedication to create good films has paid off and is a major reason why the MCU works.

The Marvel Cinematic Universe’s strength comes from the loyal fans that have excitedly stayed on the series through all of its iterations. The fans drive the continued success in more ways than can be simply expressed through an article discussing the broader topics. I am sure that most people reading my thoughts on the matter already know why they think it is a success and I’m sure they already are a part of it. As a fan of the films I have seen the success and have been a part of that. The MCU’s care of adapting these characters and bringing them together with talented people behind it is at the root of why it works so well. Avengers: Endgame has made over One Billion dollars in just the first weekend which is an incredibly impressive feat. It’s a testament to all of the examples I have mentioned. So if you are a fan and have yet to experience Endgame I highly suggest you see it and I’m certain you will continue to be an active participant of the MCU’s continued success.

REVIEW: ‘Avengers: Endgame’
Avengers Endgame review: What Can I Say About This?