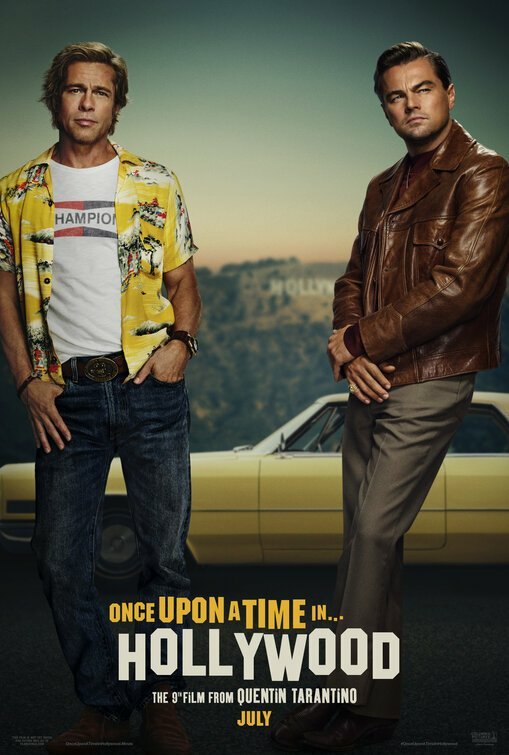 Every few years or so, we’re blessed with a cinema experience that not many directors can rival. An experience that teleports you to a world where crazy shit happens and usually it’s just some regular folk that get caught up in it. The 9th film by film genius, Quentin Tarantino, is about just that. Taking place in Hollywood in the year 1969, the film revolves around two main characters: Rick Dalton, (Leonardo DiCaprio) an actor who is struggling to get back on top, and Cliff Booth (Brad Pitt) who has been Rick’s stuntman for the last several years. The two men try to get Rick’s career back on track after some less than desired roles he had taken has caused his rep to be thrown in with the typecast actors. Alongside their story is Sharon Tate (Margot Robbie) who is just getting on top of the Hollywood flagpole.

For those who aren’t aware, Quentin’s film are very dialogue heavy and often it’s used to flesh out the characters and what they’re striving to achieve. Usually it’s about people trying to get revenge or outsmart the other characters in their goal to win, but this film takes a different approach. People will come to notice that this movie is more about personal gains than for reasons about getting even. It’s a more realistic movie that doesn’t go too overboard with it’s story, but at a certain point does contain the classic Tarantino violence he’s known for.

The overall plot is simple, yet in the beginning it takes too much time for it to get going as the movie constantly cuts away to show off Rick Dalton’s filmography, to better showcase what roles he used to take before he started taking on the lesser roles. As a Tarantino fan, I’m aware that his films often have parallel stories going and often cut away to include some important detail. However it does it a little too much for the first half hour, but afterwards it begins to fit more in line with what the story is trying to go for.

A notable role in the film is show stealer Mike Moh, who plays Bruce Lee, as a cockier version of the real life martial artist/actor. Although not 100% accurate to his real personality, Mike does an incredible job of emulating Bruce’s mannerism and voice. It’s definitely worth noting that the scene involving him is perhaps one of the best scenes in the movies, bringing big laughs to me and the theater. My personal favorite would be the final scene, where I won’t spoil, and I must admit it was a nice way to end the nearly 3 hour movie.

Overall, this is a more mature and personal story for Quentin to tackle. He has stated that this was supposed to be his love letter to this era of Hollywood, an era that abruptly ended with the real life killing of Sharon Tate. It’s a story that I had no expectations on going into the theater, but left satisfied knowing that Quentin has once again delivered the goods. Promising a retirement after his 10th film, it’s going to be exciting seeing what he has in store for us in the future. Until then, I’m gonna be eagerly waiting for the Blu-Ray release of Once Upon a Time in Hollywood while I binge his last 8 films over and over.