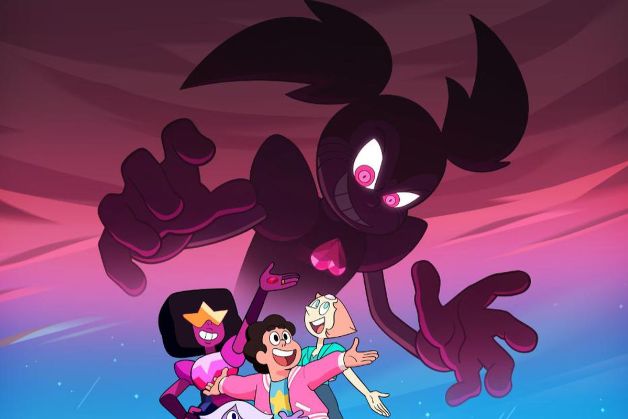 I’ve made it abundantly clear in the past that I’m a huge fan of Cartoon Network’s hit show, Steven Universe. I’m an avid follower and admirer of how it tackles heavier subject matter in a show that celebrates the beauty of being different. While a great portion of the main storyline for the show has been concluded last season the team behind the show had spent a considerable amount of time to create something special. Steven Universe: The Movie is the result of hours of work and dedication to open up new doors for the series. Fans like myself have been anxiously waiting to see how the show we love so much could translate to a full film. With the movie being released this past week and fans finally getting a chance to see what the Crewniverse put together it is great to step back and analyze to see if the film was a worthy successor. I’m happy to report that not only did it meet my expectations, but it exceeded them in parts. Here is our Spoiler-Free Review of Steven Universe: The Movie.

The film’s plot centers around Steven and the Crystal Gems two years after the end of the last season. Things seem peaceful and there is a new balance to the world. Steven has ushered in peace across many worlds including on Earth and after years of dealing with enemies they have finally found happiness. That is until a new enemy arrives named Spinel with the intent to destroy the Earth and kill everyone that Steven loves. Steven must find a way to embrace his inner strength and stop Spinel before it is too late and everything is lost.

The plot easily falls into line with many of the shows other characters and villains in the past, but that isn’t to say that it wasn’t fresh. The film is a musical and being so the journey the music takes helps to dictate where the plot leads and that a lot of what happens may be more about emotions than necessarily the intricacies of its Universe. The film like the show leans into the emotional side of each character and this can bring a lot of depth to every character including the villain. The characters speak and sing from the heart in so many moments and that makes each plot twist, each song, and each character interaction so powerful and moving at times. It certainly doesn’t neglect its comedic aspect, but the film smartly focuses on why the show has worked and that is because of the bond between these characters and the world they inhabit. The story may not be revolutionary, but its execution is phenomenal and it’s willingness to let the emotions flow really is touching.  It is the perfect narrative for a movie adaptation of a series with this much popularity that centers around loving one another, yourself, and the world around you.

The film was written and directed by series creator, Rebecca Sugar and needless to say she did a beautiful job leading this film to becoming one of the best things that the Crewniverse ever produced. Her direction lead to every aspect of the production from the animation to the music to the storytelling and the actors that bring these characters to life. She has enough talent to make every department work together exceptionally well and it shows in the final product. There are elements of the film that differ from the show and her direction really shows in every frame. The show is led by talented animators and guests, but Sugar’s directions really do shine with her own natural abilities, but also the abilities of the talented voice cast.

The cast of Steven Universe has been consistently great the entire series. This film brought back a majority of the voice cast including some previous guest characters and each actor knows these characters so well at this point that it is obvious they are talented enough to lend their personality to the role. Steven is the biggest change seeing as they aged him up and with that his voice aged as well, which gave an added dimension to the series and gives the actor, Zach Callison an easier time with the character. In addition to Zach’s change the rest of the cast have to be accustomed to singing at this point. Each of the cast members are given the opportunity to sing a song and they all nail it in this film exceptionally well. Estelle is given a massive song which was the lead single and her history in music is on full display. The entire cast is extremely talented and the film brilliantly brought that out of them once again.

Animation is a filmmaking technique that I have a lot of passion for because I think it is a valuable art. While sometimes the consistency of Steven Universe hasn’t been there with animation it is always a pleasant show to look at. This film knew it had to pull out all the stops with animation and it sure did. The animation is crisp with incredibly beautiful animation especially present on the intentionally old school style with the character, Spinel. Spinel is animated like a 1930s-40s style animated character and her fluid movements are gorgeous. The backgrounds and the worlds that are created are also breathtaking. The film’s visuals got an upgrade from some of the episodes and it’s visuals are only outmatched by it’s music.

The film is a full musical experience with songs directly written by Rebecca Sugar. There are quite a lot of musical numbers and each song is handled with the same care as it has been in the show with the addition of Chance The Rapper helping on some of these songs. The music is gorgeous and it really helps to tell the narrative beautifully. Musicals are excellent at showing the audience the emotions of the characters and the emotions are at the core of this story so having moments play out in song heighten a lot of the film’s tension and plot points. The music is all around fantastic and it is obvious that just as much thought and care was put into this aspect as was the rest of the film’s individual elements. It definitely stands out as a major highlight.

Steven Universe: The Movie is a brilliant celebration of why this show is so beloved. It has high production value, catchy musical numbers, and a lot of heart. I’ve discussed my love of the shows positive messages and this film is no different embracing that love is the key to happiness and that includes love of oneself. This is a beautiful film that could have easily played in theaters if Cartoon Network had wanted it to. It is one of the best films I’ve seen this year and as a fan, I was thrilled with how it all turned out. I highly recommend it to those who love the show.