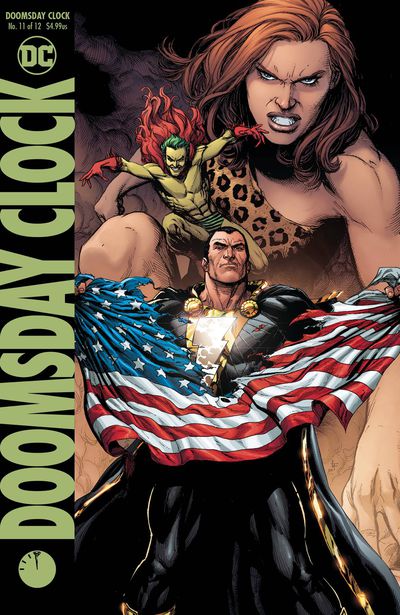 The running joke by now amongst DC fans is trying to guess when this series will end. “2025? Wow, such an optimistic guess!” Well it’s probably not going to take that long (I hope) and it’s really anyone’s guess when it’ll actually finish. But for now, we have the penultimate issue and it’s all coming down to the final moments.

Everything that’s happened with all the hints in Rebirth: The Button, the Super-Men Theory, and the return of Wally West are tied in today. Even the release of Justice League #31 and Legion of Super-heroes: Millinieum coincide with the Doomsday Clock story arc in a few ways. I’m going to highlight the issue so if you haven’t read the issue yet, now’s the time to turn back.

The issue begins and all hell is breaking loose. Batman is fighting American soldiers to prevent missile launches, riots have broken out across the world, and Black Adam has attacked the U.N with Wonder Woman at attendance. Everything seems to be beyond saving, there is no hope, and people have lost faith in Superman. After he was knocked unconscious by the explosion in Moscow back in issue #8, the world has had enough of his interference. Especially when it’s defending the supposed culprit, Firestorm, who we learn wasn’t responsible for any wrong doing.

The narration of Kovacs Journal juxtaposing with the art confirms that Ozymandias is partly to blame for the worldwide chaos. This whole time, (since the end of #7) he’s been hiding in what may be the lower levels of the ruins of Arkham Asylum. It’s possible it’s somewhere else but it has cells and after Arkham was pretty much burned down after #4, it would be a safe location to use as a base of operations. From here, he’s got his set up of multiple TV’s feeding him info, as he did back in Watchmen in his Antartic base. He watches, pleased, as the world falls apart. Pleased, because he thinks he can save it.

The Puppet Master watches his show play out. (Credit to: DC Comics)

With the heroes on Mars and no one in the US to defend it, Russia gives out an ultimatum to the President (not shown directly but very obviously is supposed to be Trump). Deliver Superman over to them to face punishment, or they will take him themselves. The President delivers a message stating that Superman is no longer their main deterrent, and that they can rely on more traditional methods. Like the nukes Batman prevented from being launched in the very beginning. It’s like the world is falling into the same kind of despair that the Watchmen world fell into.

As this all goes down, Lex Luthor has taken Lois Lane to his secret vault. There, lies the clue to Dr Manhattan’s meddling with time. Everytme Manhattan manipulates the timeline or his energy, he leaves behind a photo. That photo, is the one from Watchmen #4 that is of Jon and his date Jenny. It’s the one picture of Jon before he had the incident that turned him into Dr Manhattan. Lex shows Lois that he has collected every single photo left by Manhattan and one of them was at the scene of none other, the Wally West’s Rebirth. It was then that Lex knew he had stumbled upon something vast and dangerous.

Ozymandias then spills the beans to Saturn Girl on how he’s been able to manipulate the world into hating Superman. It’s very reminiscent of how back in Watchmen #11, he too recounted his machinations in the past tense. Ozy caused the truth about Firestorm to leak, he centered him in the town square and used his pet Bubastis II to spark a charge similar to Dr Manhattan’s energy. When Superman came to defend Firestorm, it showed the world which side he apparently was on: the Metahumans.

This indeed is what led to the Justice League to go to Mars and confront Manhattan. It’s all been done to destroy trust in Superman and get rid of his allies. But Saturn Girl says although she can’t read Ozy’s mind, she knows Superman will win. Ozy counters and says that since Superman is so important to her, then why doesn’t he remember her? At that moment, she realizes her future doesn’t actually exist anymore, since Dr Manhattan erased the Legion of Super-heroes and immediately begins to vanish. She became a paradox and now, she’s gone.

In all the chaos, there’s one man who hasn’t been around for a while. Reggie Long, the now ex-Rorshach, after finding out it was Rorshach that drove his father over the existential edge. Now living in the streets, Reggie has nightmares of his father burning to death for helping Walter Kovacs. When he awakes, he finds Alfred there with a plate of pancakes wrapped up. Needing his help, Alfred tells Reggie they believe his story about Ozy now. Angry that he was thrown into Arkham for his story, Reggie runs and says he’s no longer Rorshach.

It is now, that the issue really begins to enter its final stage. Black Adam has made his way to Washington D.C and moves toward the White House. The President is evacuated and there’s no one defending the country.

Black Adam at the White House. (Credit to: DC Comics)

There’s no one to defend the Capital…except Superman. He arrives on scene, ready to fight Black Adam and his metahumans. Against all odds, even when the world hates him and the US wants nothing to do with him, Superman will still fight for humanity. And in that moment, we see it happen at last: Dr Manhattan meets Superman.

It is time. (Credit to: DC Comics)

The backmatter provides an in-depth look as to how Luthor has been following the bread crumb trail left by Dr Manhattan. Interesting to see Lex has been a part of this since the beginning.

If I’m willing to forgive the long delays, I would say this series could’ve been hailed as one of the best comics ever. Yet the constant breaks in between have not only ruined the pacing, but also the impact it would’ve had on the overall DCU. Yeah we’re see its residual effects now, mainly because DC was tired of holding it’s team from working on their projects. But it’s at least happening, and once this is all collected together, the timeline will probably be fixed up.

I have much respect for Geoff Johns and all he’s trying to do here. He’s writing some of his best work and I love this series very much. Hoping he has a nice drink once this is over. Also, the art is also nothing short of masterful! Gary Frank NEEDS to be awarded for this series, along with every other member of it’s team. Brad Anderson really does work perfectly with Gary and I think this whole team has really put their effort into this series.

Here’s hoping that the final issue ends on a high note!