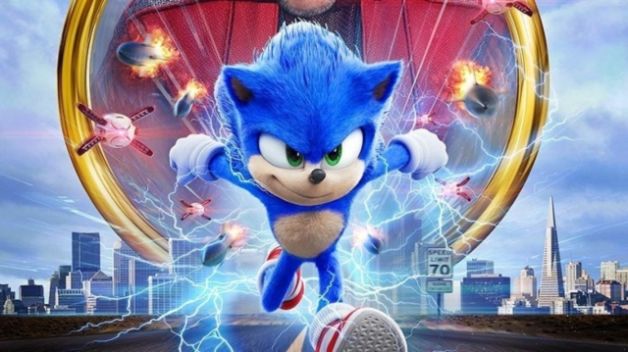 When Paramount Pictures unveiled that they were making a live-action/animated hybrid adaptation of Sonic The Hedgehog people were less than enthused. There was quite a lot of skepticism especially since it was beginning to sound more like other films that have tried this style including the Alvin and the Chipmunks films, which were very poorly received. The skepticism didn’t stop when the first images of Sonic and the trailer were released last year, which the look of Sonic himself was mocked  to no end forcing Paramount to force their animation team to redesign the look of Sonic, which cost the studio some money and unfairly worked some animators way too hard. While the ethics of it is certainly in question and worthy of further discussion what I would like to discuss today is the quality of the movie itself. I didn’t know what to think of the film myself, but I was surprised by how successful the film was regardless of what it took to get there. Here is our review of Sonic The Hedgehog.

The film’s plot revolves around the tiny and fast blue hedgehog after he has spent a majority of his life in the town of Green Hills following his fleeing of his home world thanks to magical rings that transport him to other parts of the Galaxy. Sonic enjoys the people and town of Green Hills until he accidentally taps his hidden power, which alerts the authorities and an evil scientist named Doctor Robotnik decides to track him. If Sonic is to live he must find a way to escape. With the help of a local town sheriff he goes on a journey to find a way to avoid being taken, while also enjoying everything that Earth has to offer.

The plot is nothing particularly new. It lands on a lot of the same tropes as seen in previous family action/adventure films, but it is handled well enough here that with the World that has been crafted and the characters present it hides a lot of that more obvious borrowing of a plot structure. The Sonic license led them to some really interesting story concepts and adapting certain elements from the games including the infamous rings, which in this film work as a magical McGuffin that transports the user to different worlds.This plot device is very useful to help bridge the gap between the video games and the film well, which can often times fail in other video game adaptations. The plot is probably the weakest element to this film, but that doesn’t diminish the fact that regardless it still manages to come together to work nicely with some of the stronger components to this fun family film.

Sonic works largely due to the talent behind the production, which breathed life into this adaptation in ways that a lesser team would not have been able to. The film was directed by Jeff Fowler in his directorial debut whose previous work was in visual effects and since he was at least somewhat familiar with that department the film looks quite good in a lot of regards. He led his team to create something that had a love for the source material and everyone under him knew how to execute it. The crew and the visual effects team deserve a lot of credit for their work. They were more than likely overworked for their time and underpaid before they were all let go not long before Christmas, which is a shameful practice that should not happen to any group of talented people. They all deserve to be known for the work they did on this project and I certainly hope that they all find work at other places where they can be valued for their talent and not mistreated or let go.

The talent also extends to the extremely versatile cast who lend their voices and their physical acting abilities to this film. Ben Schawartz voices the titular character and brings that youthful, rambunctious quality we’ve all come to know and love from the video game and the other adaptations we’ve seen of him. His performance is nuanced embracing the comedy and heart seeping from every line that his character needs to deliver. Without him the character of Sonic wouldn’t work nearly as well. The film also stars James Marsden as Tom Wachowski, the Sheriff who is also a very important character with an arc that is handled fairly well. Marsden does well with the role and carries a good portion of the emotional narrative. The most interesting and memorable character in the film is Dr. Robotnik played by the incredibly talented, Jim Carrey giving his most over the top performance in years. Carrey is great simply for channeling the energy that made him a huge star in the 90s. He is a villain who is obviously having a great time channeling an evil psychopath, which showcases how incredibly gifted a performer Carrey is. It is not subtle in any way, but it brings some great laughs especially when he pairs his over the top delivery with the more clever and more subtle lines he is given. He is a presence on screen and it was great to see him in a fun role like this again. The entire cast does well with what they are given and make the film so much better because of their presence. Without them this film wouldn’t work nearly as well.

Visually the film looks stunning in so many moments and I credit that to the talented visual effects team who worked hard on it. It opens up with a world that is very reminiscent of the video games down to the loops, bridges, and grass that would be very familiar to fans. It’s a great moment, but it uses that level of quality throughout with a lot of the action and spectacle that happens. It finds a great way to balance the cartoon-like persona of the Sonic world, while keeping the real world feeling bright and alive. The film’s visuals are a challenging juggling act of talented effects people in association with the cinematographer and the director maintaining the right tonal balance. It even takes the time to litter the background and foreground with visual cues and Easter eggs from the series. It’s quite a good looking film for what it is.

The sound is also well including the score composed by Tom Holkenborg.  There are some great moments of themes and original music, but the obvious tributes to the famous video game music steals the show in a lot of cases. There are instrumental versions of the theme and other iconic music changed up so that they feel like Easter eggs placed intentionally throughout, which as someone who grew up with these games I found incredibly pleasing. The sound design is also quite good with recreating some iconic sound effects as well as mixing everything together so that it sounds as nice as it looks.

Sonic The Hedgehog is a highly enjoyable love letter to the character and to the franchise even if certain elements don’t quite stick the landing. The plot is more generic and the script leaves some room to be desired, but the talent involved elevates this film to an entertaining level. It was made by people who did the best with what they had and it shows. This film works way better than it ever should have and as someone who has been a fan of Sonic for quite some time I walked away happy with what we were given. It’s a good film to see with your family and I definitely recommend checking it out if you’re at least a little bit interested. It’s worth your time.