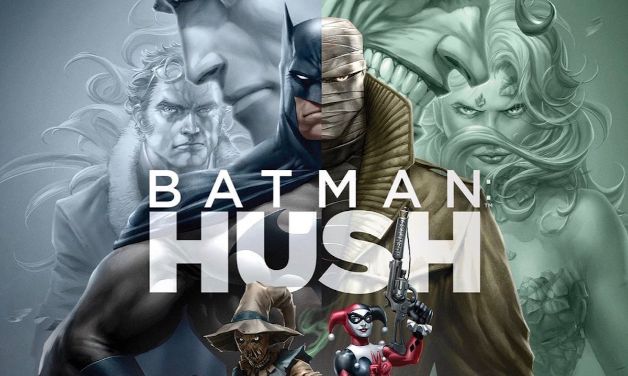 When it comes to the conventions I’ve been to I have been incredibly lucky to go to ones that often premiere DC’s animated films to the fans who would most appreciate them. These animated films have been coming out consistently over the last several years and have often delivered on things that the DC Live-Action films have yet to do. This is the case with their most recent film that I got a chance to see at San Diego Comic Con this year. Batman: Hush is their latest project set within their own animated film continuity, but it is also an adaptation to the modern classic graphic novel, Hush. The film works in multiple ways and this is a popular story, which people have been wanting an adaptation of for quite a while. The big question on everyone’s mind is whether or not it lives up to the hype surrounding it and as a big fan of the original comic I found some elements engaging while others were severely disappointing. Here is our Spoiler-Free review of DC’s Batman: Hush.

The film’s plot is a mostly faithful, but simplistic telling of the basic plot from the Graphic Novel of the same name so if you have yet to read that novel the story revolves around a new villain named Hush coming to Gotham with knowledge of Batman and setting up a layered plot to use other well known villains to take him on including Harley Quinn and Poison Ivy. Meanwhile Catwoman decides to protect Bruce and tension heats up between the two of them leading to some interesting romantic chemistry. It’s up to the newly formed duo of Batman and Catwoman to thwart Hush and figure out what his plan truly is and stop him.

The film’s plot is a loose adaptation and for the most part the story is kept in a very similar structure. It certainly takes some liberties like removing things and  adding new scenes to keep in line with the continuity they have with these animated films. The story is one of the best parts of this film because it has an incredible source to work off of and the changes don’t hinder much, but without spoiling the film there is a turn in the story that will very easily annoy fans of the original comic and it did for me. The film’s narrative is well told and not knowing the source material will make this experience better, but as a fan I was greatly disappointed in the new twist presented in the film. It changes a lot of what I felt was iconic from the comic and it severely hurt my overall enjoyment of this new adaptation. The change makes the narrative feel less grand and less well developed, which is comparatively lackluster by a fairly strong first half of this film. While I was disappointed I am curious to see how this film is received on a wider level. The script and story is well told, but I don’t feel it comes close enough to sticking the landing for the fans.

The DC Animated Films have some talented individuals working on them and this is no exception. The film is directed by first time DC director, Justin Copeland who directs the animation with ease. While the budgetary restraints can sometimes be felt the film still has some solid moments of animation and visual splendor led by the director and animation team. The film’s story was written by Ernie Altbacker who is experienced with these films including writing the excellent Justice League: Dark film. His writing for many of the characters stands out well in this particular adaptation and his grasp on finding a really strong narrative to center the characters around was well put together. He did a great job at telling the story in a more condensed fashion and while I have issues with a twist that happens I can’t deny that he does have talent when it comes to telling stories about these characters as evidenced in his past work. The combination of this first time feature director and other talent really do make the best parts of this story work. In addition to the talented people behind the scenes it is great to look at the talent that lent their voices to this film.

The cast really do a great job at breathing life into these characters. Jason O’ Mara voices Batman yet again in his 10th film and he’s become quite accustomed to the character. While Kevin Conroy’s Batman is iconic, O’Mara does a great job at working with what he is given with Bruce in this film and you can tell this portrayal has become natural for him. Hynden Walch returns to voice Harley and once again proves why she is one of my favorite actresses to portray her. It is apparent she enjoys the role and she certainly stands out in the film alongside a powerful Catwoman performance from Jennifer Morrison and a continually excellent Nightwing portrayal from Sean Maher. Some returning cast members as well as some new people really do make the film stand out from a performance perspective and it helps to deliver the material well enough that each actor gets time to shine. The talent present is worth noting and definitely deserves the recognition of constantly delivering solid performances even when the material may not always land.

The film benefited from a visual and technical perspective from the character designs utilized in this particular film. The world of Gotham and the art stand out even though I miss the art style of Jim Lee that was so striking in the original comic. It’s a solid looking world and each character feels right, but the film does suffer at times from the animation, which can look a little stiff at times. While stiffness is apparent the film’s animation also has some great moments, but I can tell that certain things had to be kept simple. It’s a solid looking film with moments that don’t work as well, but it still comes together well enough to tell the story it needs to tell and it isn’t distracting.

In terms of the audio the film does have a solid score by Frederik Wiedmann whose music adds to the tension, the characters, and the narrative. His score is ever present and his history with working on animated projects shows that he has talents to bring life to the music he produces. The sound design is also quite good with a good amount of attention to detail. The audio in general for this film is well  thought out and balanced so that it doesn’t detract from the story. At times it even enhances the film greatly.

Batman: Hush is a film with a lot of great elements that I don’t feel come together as well as I would have liked in the end. It has great characters and a decent handling of the world it presents, but its changes especially in the later half of the film don’t live up to anywhere near the source material. It softens it and makes the whole film not nearly as engaging as it could have been, which is dissappointing because it is built on a solid layer with some talented people involved. I avoided spoiling the film so that you can see it for yourself and determine whether or not it worked for you personally. Unfortunately it isn’t a film I would recommend to those that are a fan of the original story.

“Joker” gets competition slot in Venice Film Festival
Film Review: Once Upon A Time…..In Hollywood