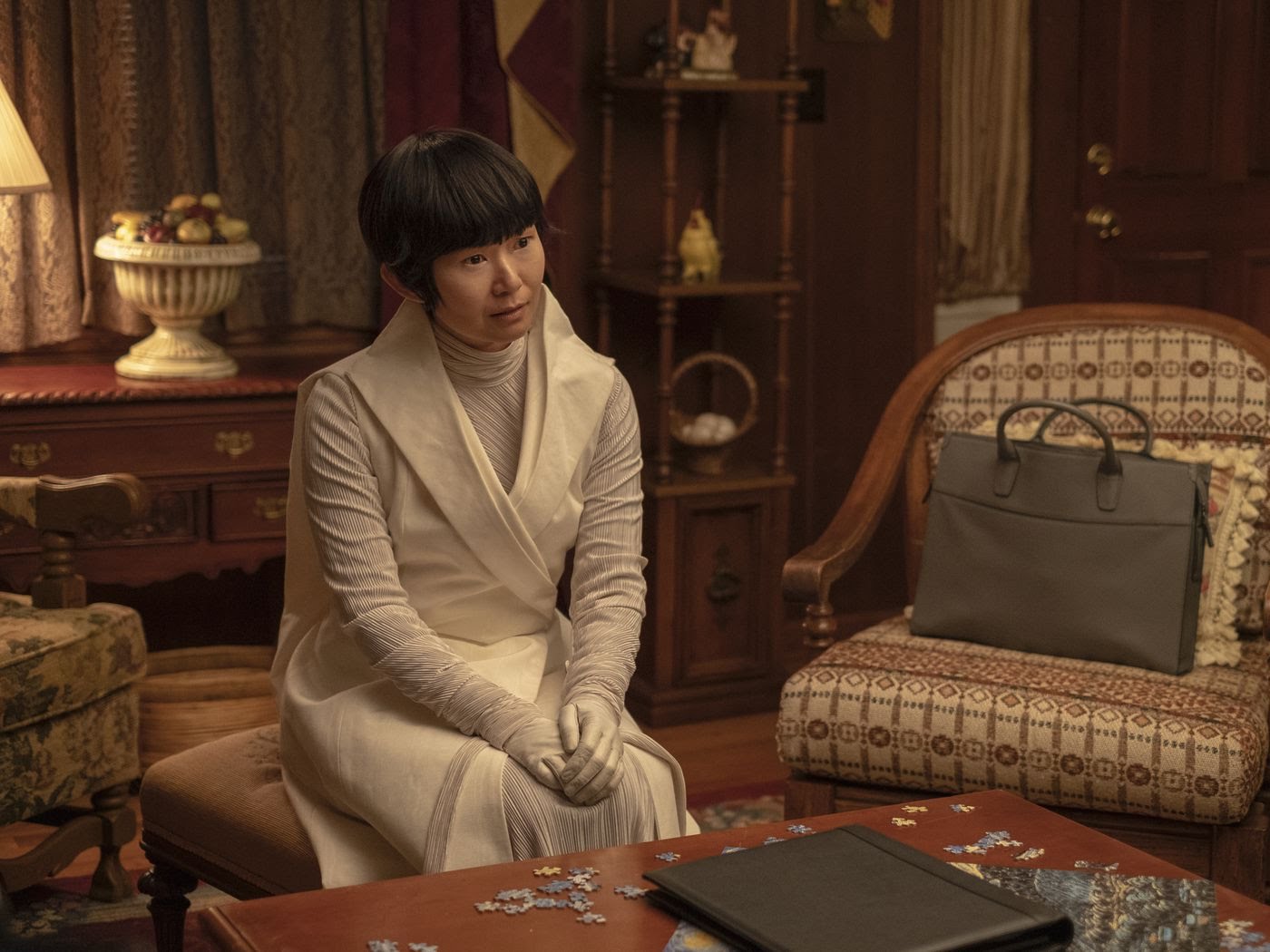 This show definitely has a knack for starting it’s episodes in odd ways. This week’s episode begins with a quirky, almost sitcom like opening with Kenny Rogers and a farming couple doing their usual routine. It’s only when they get ready for bed that they’re interrupted by a doorbell. At the door is Lady Trieu, trillionaire recluse who is building a clock tower on Tulsa Town square and wants the couple’s house and all of their land. Confused and off guard, the couple demands her to leave when Trieu offers what the couple had failed to achieve: having a child. Trieu appears with a baby she claims she created the baby from their DNA and is willing to offer it as part of the stipulation that they sell everything to her. At the very moment they sign, a meteor crashes on the property and Trieu claims it as her own.

All of this demands to be answered, simply put: what the fuck is going and who the fuck is Lady Trieu? It’s apparent that she’s important to the shows ongoing mystery and she may have some hand in what’s going on in the background of the plot.

We cut to Angela cleaning her hideout of any evidence of Will being there, and then returns to the Greenwood Ancestry Center. Needing answers as to her relation to Will, shes breaks in and accesses the database to discover her family tree. It’s there she hears the story of her great-grandparents and how Will was lost from the city records. Accepting these facts, Regina runs outside to hear a noise and we find Laurie from last episode laughing at the fallen car. The car turns out to be Angela’s, the one her grandfather was abducted in by his friends.

Quickly noticing the situation’s peculiarity, Laurie leaves Angela to her business and Angela goes home. Crawling into bed with her adopted son, they discuss the funeral incident and it’s obvious he’s shaken up and perhaps traumatized. Angela too is looking exhausted and dealing with a lot of stress in a short time.

We get yet another shot of eggs, something the show is getting comfortable with at this point being that it’s the third or fourth time we see someone cracking eggs. Cut forward to Angela visiting Looking Glass in his rusted backyard bunker, looking like something from a 1950’s Cold War manual. Inside, LG has means to continue his Mask work in safety and we see he’s a man of focus, but its where taking one’s work home can also a sign of obsession we e a similarity between him and Rorshach. Angela and LG discuss Judd’s potential to being Kalvary and Angela departs.

In what is one of the weirdest scenes, Angela, in full Sister Night gear now, sees a person dressed in what appears to be a silver morph suit and chases them down. Weirdest part being the person squirts a liquid on themselves and slides into a sewer grate, which I give a 10/10 for smoothness and for being a total weird escape method.

A car ride with Angela and Laurie gives the two time to connect over their shared connection of being masked avengers and Angela learns of Laurie’s parents and how the tragedy of their lives lead to Laurie’s birth. The awkward tension is broken when they arrive at their destination: the giant tower being built by Lady Trieu. Here we see Trieu’s company is capable of building VTOL crafts that Laurie believes is what abducted Will from Angela. But when Angela and Laurie meet Trieu, Trieu reveals to Angela in Vietnamese that she knows Will, and has even been given a message to give to Angela. Ah, the questions that are arising!

Remember when I said the Silver Lube man was weird? Forget that, we got something weirder! We now come to Adrian Veidt, who is spending his night on a rowboat doing what seems to be crab fishing. But alas, we see that it’s not crabs he’s pulling out, it’s newborn babies. It seems that for Adrian to clone his servants, he has t let them grow in water…weird. What’s worse is when he finds the perfect baby, he needs them to grow immediately. That requires putting them in a microwave like machine that accelerates their growth to adulthood (this show ia something else entirely people).

One could wonder, why does Adrian need two more servants when he seems to have so many already? Well when showing the newborns their first job, it appears the job is cleaning up the numerous bodies od the previous clone servants. Now enlisting the newborns help, Adrian begins launching bodies with the help a catapult to reveal that the bodies disappear after a certain distance in the sky, implying that Adrian is actually living in a prison of some sort somewhere else, perhaps in a VR dimension or some kind of hologram trick.

Whatever it is, Adrian acknowledges that it’s been four years since he’s been there and it proves a fan theory that each episode showcases a single day of a year in his life, given how he eats a anniversary cake each time. Interesting things are happening indeed. Angela returns home and discussed her long day with Cal, who tells her what Laurie wanted when she visited. Angela is wary of Laurie despite her being honest as she can be.

Lady Trieu and Will are now having tea, interrupted when her daughter, Bian, has nightmare. After she departs, we learn Will is Will Reeves when Trieu’s daughter addresses him as such. The two go back to discussing Will’s playing around with Angela and Trieu demands he stop fooling around with her. She wants to know if Will is fully in on their plan. Will stands up and states he’s fully in, because in three days, Angela will hate him for what they have planned for Tulsa. Will whispers “tick tock” as he looks upon the tower and the aircraft he was rescued in ascend.

This episode is by far the weirdest one and it gives us answers with more questions on top. For starters, what is so devious of a plot that Will knows Angela is going to hate him? How did Trieu know a meteor would crash on the property, and what is it? These questions are proof that Watchmen is a show worthy of it’s name and how it’s mystery is intriguing and engaging.

Phenomenal episode, fantastic twists and a feeling of dread as we tick closer.

Why ‘Terminator 2: Judgement Day’ Is A Modern Classic
The Brilliant Artistry of Stanley Kubrick’s ‘The Shining’