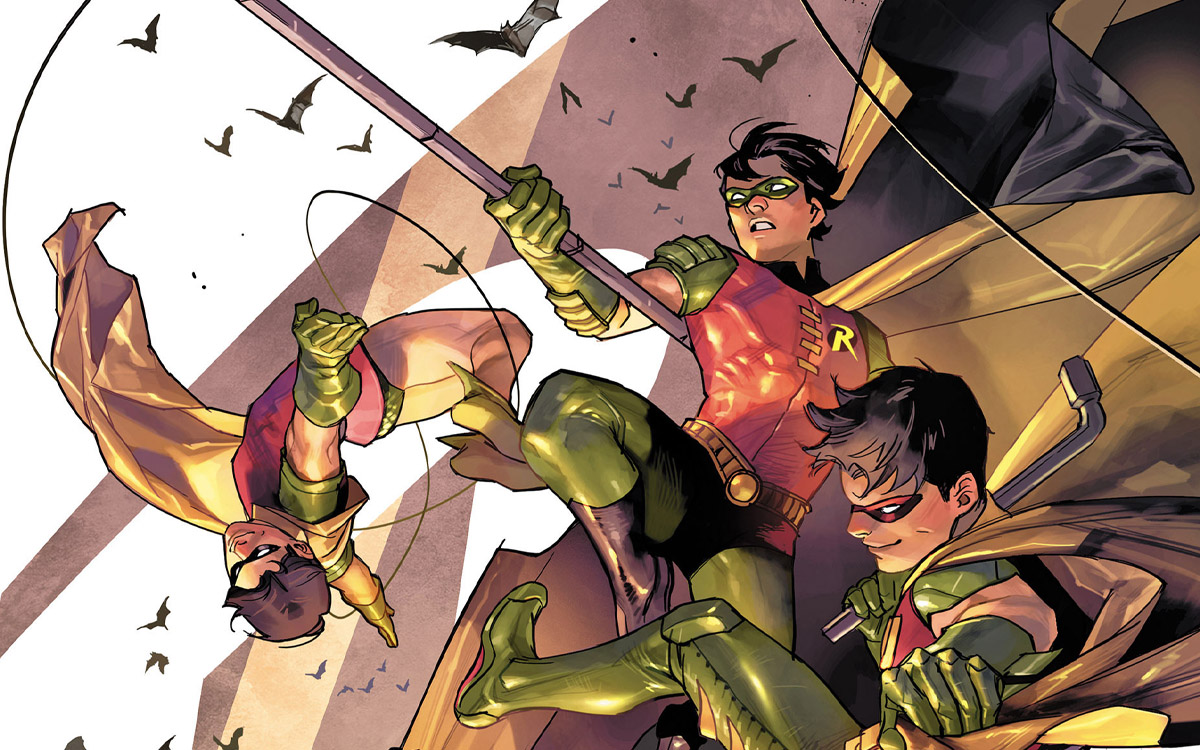 The past year has marked the 80th anniversary benchmark for several iconic DC characters. Ever since the release of Action Comics #1000, DC has rewarded its fans with 100 page super spectaculars to celebrate that 80-year legacy. This week, we got to celebrate 80 years of the other half of the dynamic duo, Robin, The Boy Wonder. While I was not particularly impressed with Detective Comics 1000 (The only stories of note were Kevin Smith’s, Paul Dini’s, and James Tynion’s), the Robin: 80th Anniversary super special, was absolutely phenomenal.

The book is a collection of one shot stories focusing on various different Robins. It should come as no surprise that the first, and most well known Robin, Dick Grayson, should have the most stories in the book, and that they come, well first. Dick has a collection of 4 stories, each written by industry veterans and legends like Marv Wolfman and Chuck Dixon. Each one of Dick’s stories is a love letter to the original boy wonder. They take us back to a time before the awful Ric Grayson nightmare we are in now, when the character oozed comedy and charisma, but most importantly had one of the greatest hearts in DC comics.

The rest of the stories progress down the line of Robins. Jason Todd comes second with a fantastic story written by Judd Winick and art done by Dustin Nguyen called More Time, of all the stories written in this special More Time is in a 3 way tie for my favorite. Jason Todd has never been the most popular Robin, but since his resurrection and rebrand to Red Hood, he has become a fan favorite. The story of More Time is a beautiful look at Jason showing that despite the complicated relationship he may now have with his former mentor, he has never forgotten the gift Bruce gave him in a home. I won’t go into all the details and spoil the story, it’s good enough that you should experience it for yourself

Being the Third Robin and probably the Robin with the longest tenure outside of Dick, Tim Drake got two stories and is next. Both of Tim’s stories are solid, but as my favorite Robin, I was kind of hoping for a bit more from those stories, and that might genuinely be my only complaint with this book. That’s not to say that any of Tim’s stories are bad. They are both fun and apropriately handle his character, and I enjoyed them. I just wish there had been more of a focus on his mental ability, and maybe have him doing a solo detective adventure (in my opinion, after Batman, Tim is the heir of the title World’s Greatest Detective). Of Tim’s stories, my favorite would have to be the second story which was written by James Tynion IV, and serves as a prequel to his Rebirth Detective Comics run.The story delves into Tim’s insecurity in donning a Robin costume again and whether or not this was truly a step forward, a step back, or if he even had a place in “the Family” anymore.

The next story in the book follows Stephanie Brown. I honestly don’t have a lot to say about this story, as Stephanie Brown is a character that I am not especially well versed in. All I can say is that the story is a fun quick read that showcases the character in a setting where she feels out of place, and it brings a great deal of relatablity to her character. Batman has expectations of Robin that come with working with 3 separate Robins, and she’s trying to find her own rhythm in this role. The only complaint I had is the art, it’s not bad, but the style is not my cup of tea.

The book wraps up with 2 stories focused on Damien Wayne. Now Damien is a character that I have a very mixed opinion on. Since his creation, I have had a great disdain for this character. To me he was a poorly written amalgamation of the traits that defined each of the previous Robins packaged in the worst personality possible. That being said, there have been moments in the books, where the potential for this character has shined through. One has been whenever he works with Dick Grayson, which should be expected. Dick is the kind of character that brings out the best in the people around him. Outside of this, the only other time I really enjoyed Damien was in the Peter J Tomasi Super Sons book. Damien Wayne and Johnathan Kent became my new favorite dynamic duo. I love seeing the two together. Instead of showcasing Damien interacting with Dick like one would expect in a Robin book, they instead showcased Damien through the eyes of Johnathan Kent. My Best Friend is the frontrunner of my 3 way tie for my favorite story in this book. It’s a reminder of a time where Bendis had nothing to do with Superman, and it’s everything I loved about Tomasi’s original Super Sons run.

With everyone in quarantine mode, people have a lot of free time with not a whole lot to do except worry, if you are looking for a light in dark times, I offer you this. Celebrate 80 years of the Boy Wonder. Let the character that brought color and light to the dark world of the Bat, bring a little light into these dark times. DC Comics’ Robin: 80th Anniversary is availabe at a comic store near you, and is available digitally on the Dc Comics app on mobile devices.

‘Legends Of Tomorrow’, A Gem That Could’ve Shined Even Brighter
The Struggle Coming To an End: Could ‘Berserk’ Be Reaching Its Final Chapter?